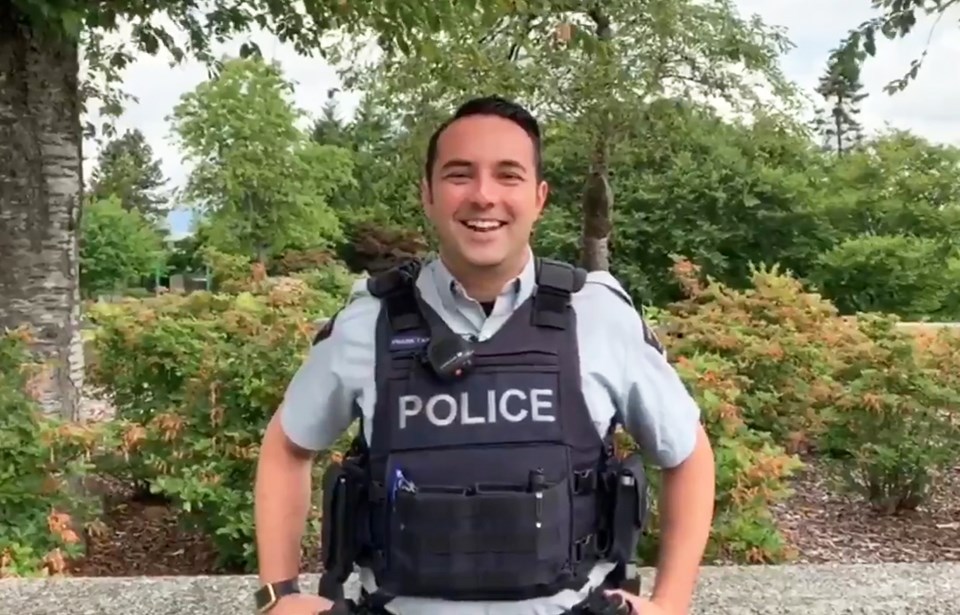 A screenshot of a Burnaby RCMP Twitter video posted Thursday shows school liaison officer Const. Frank Tarape welcoming kids back to school after the COVID-19-related hiatus. The video has been criticized in light of ongoing international protests against police brutality.Burnaby RCMP

Burnaby RCMP has taken down a Twitter video featuring armed RCMP officers in uniform welcoming kids back to Burnaby schools after the COVID-19-related hiatus.

“It didn’t relay our intended message,” Cpl. Brett Cunningham said of the Twitter post. “Our intended message was to welcome students back to school and explain some of the changes we’ve made during the pandemic. The focus has not been on these changes, and we chose to remove it.”

The video featured Const. Frank Tarape telling students that officers are back to support them, monitor speeds in school zones and “connect on issues regarding school safety.”

After announcing that they may be wearing surgical masks at schools, keeping their distance and refraining from high fives because of COVID-19, all seven officers introduced themselves by their first names.

I'm a @burnabyschools parent. Pull this video ASAP. We are watching police kill people and this does not create safety or care and hurts your students, their families, teachers, and administration. Get police out of schools. Take this down now.

All but one – Const. Tulsi Reddy – was wearing a bulletproof vest and carrying a sidearm in the video.

The Burnaby school district retweeted the video with a positive comment, which prompted a slew of critical replies.

“The timing is so terrible,” Byrne Creek Secondary School parent Trudi Goels told the NOW. “How can we think of police as being something nice or good when we are hearing Black and Indigenous people calling for defunding of police departments.”

On social media, Goels and others called for the video to be taken down and for youth investigative team officers (sometimes also called schools liaison officers) to be taken out of schools.

“I take my lead from the racialized communities,” Goels said, “and they have been saying this is actually a school-to-prison pipeline. This is not actually creating a better environment for racialized students. It causes a lot of trauma and a lot of harm. If you have a bad experience with policing in your family and then you have to go to school and see a police officer there, it doesn’t make you feel safer.”

In a letter to the editor, Stephen Elliott-Buckley called out the Burnaby school district for retweeting the RCMP video.

“You need to take that tweet down and apologize publicly, then reach out to communities constantly victimized by the colonial white supremacy of police forces in your city, communities, students, staff and schools as a whole,” Elliott-Buckley wrote. “This is an opportunity to reach out and seek reconciliation with vulnerable communities for systemic passive and overt aggressiveness and trauma from policing, and the school districts' complicity in their partnerships with police forces.”

When asked for comment, Burnaby RCMP Chief Supt. Deanne Burleigh did not address the video directly but talked about one of the detachment’s officers.

“Earlier today, I spoke with Kenny Mugisha, a former Surrey student who told me about the time he missed his bus and was driven home by his school liaison officer,” Burleigh wrote in an emailed response. “Kenny describes this great experience as having set him on the path to a career in policing. Now, Const. Kenny Mugisha of the Burnaby RCMP, a member of both the African-Canadian community as well as the policing community, thrives to strengthen the relationship between police and the diverse communities we serve in Burnaby. In light of the recent tragedies around the world, I am reminded of the importance of these relationships.”

Burleigh went on to say school liaison officers use crime prevention, education and early intervention strategies “to create and maintain a safe and caring learning environment.”

“The Burnaby RCMP will continue to build bridges with youth, their family and all Burnaby residents,” Burleigh said.

Burnaby school board chair Gary Wong stood behind the district’s decades-long partnership with the Burnaby RCMP on the school liaison program.

“Over the years, liaison officers have become part of the fabric of our school communities – sharing and supporting education around problem solving, communication and making safe choices,” Wong said in an emailed statement. “As people around the world stand up in solidarity against racism, I am reminded of the importance of education and building understanding through positive relationships.”

In a second statement later the same day (Friday), the district apologized for retweeting the video.

"We stand in solidarity with BIPOC and allies demanding systemic change," reads the statement. "We regret not making this clear in the first place. ... Positive intentions notwithstanding, we recognize the timing of this tweet was wrong, and it has been deleted."