Senior citizens must be deterred from interfering with the expansion of the Trans Mountain pipeline, according to a Crown lawyer who successfully argued for two women over the age of 65 to be jailed for violating an injunction protecting Kinder Morga
Jul 31, 2018 10:31 AM By: Kelvin Gawley 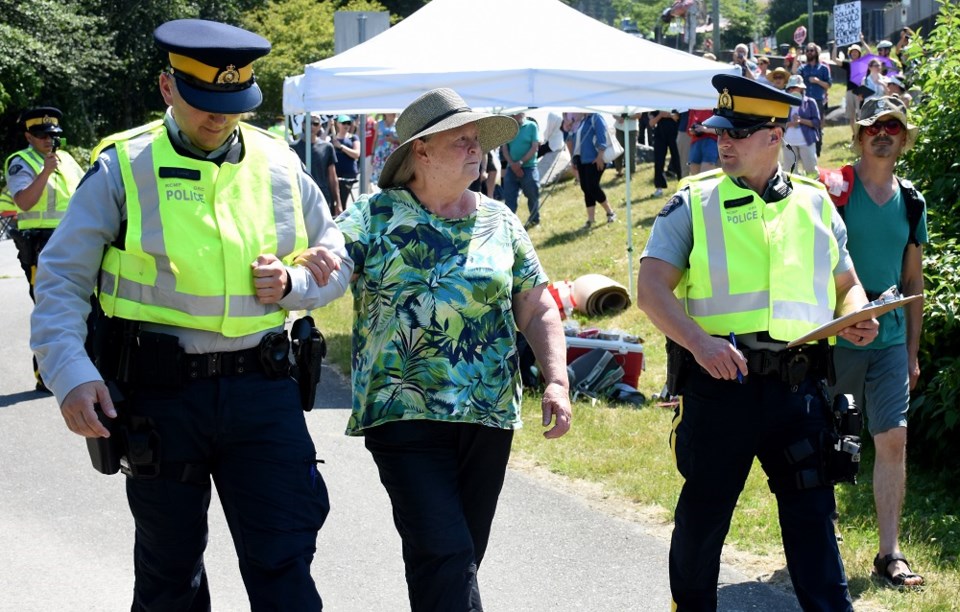 Senior citizens must be deterred from interfering with the expansion of the Trans Mountain pipeline, according to a Crown lawyer who successfully argued for two women over the age of 65 to be jailed for violating an injunction protecting Kinder Morgan’s work in Burnaby.

Embree, a 70-year-old grandmother from 108 Mile Ranch, will spend the next seven days in jail for refusing to get off the road leading to the company’s Westridge marine terminal on June 19.

Constance Lasheras of Langley, who was one of eight people arrested at the Trans Mountain tank farm on June 30, was also sentenced to seven days in jail, but will serve her term intermittently to allow her to continue working with a non-profit supporting families of children with fetal alcohol syndrome. Lasheras was identified as being older than 65 in court.

Embree was the first protester to be arrested after Affleck approved a beefed-up injunction at the beginning of June.

Prosecutors have been seeking increasingly more hours of community service and higher fines – up to $5,000 – for violators, as they try to increase deterrence.

“The older population of otherwise good standing in the community, without a criminal record is the population that must be deterred,” Rattan said, prompting laughter from the gallery filled with supporters of the protesters.

Embree said she accepted the facts presented at trial, but asked to make a statement.

“I have live my 70 years by abiding the law. Please allow me to explain why I have now chosen to break one,” Embree told the court.

“If we look back on our history, there have been many times when our laws have supported injustices,” she said, citing slavery in the U.S., child labour in the U.K. and Canadian residential schools. “I truly believe that when we have laws that support injustice, it is the duty of all good men and women to stand up and challenge those laws.”

Embree says she wants the full 7 day jail sentence to send a message that resistance will continue no matter that consequence pic.twitter.com/hDmjC6DGiQ

Embree earlier told a crowd gathered outside of the courthouse that she was hoping to be handed the maximum sentence to send the message that resistance to the pipeline expansion will continue no matter what the consequences.

“They really need to understand that it’s not going to stop. We’re going to keep doing it,” she said.

Lasheras fought back tears as she made her own statement prior to being sentenced.

She acknowledged that she was guilty of the charges at hand.

“However, I am not a criminal,” she said. “I am a mother and I worry for the future of my children. I believe climate change is very real and, as a society, we must make a shift away from fossil fuels. Building another pipeline carrying bitumen from the tar sands is definitely not the way to go about that.”

In his ruling, Affleck said Embree and Lasheras clearly knew they were violating the injunction and breaking the law when they were arrested. He said there was a clear difference between them and other protesters who chose to protest lawfully.

“Although the number of arrests have declined as the months have gone by, I have no confidence that there will be no further organized defiance of the injunction,” he said.

One of the protesters’ supporters, Owen Finn, called the day’s proceedings a “debasement of the legal system.”

“One of the most ridiculous things I’ve ever heard in a court of law: that maybe the judge should target seniors for being dangerous people to the community,” he said.
Finn, 71, said he does not think judge’s intent to deter protests will work and said he might violate the injunction himself to fight the pipeline project.

Pipeline opponents in court told the NOW that “bold action” would take place on Wednesday at the Westridge terminal.

Embree and Lasheras were among eight protesters in court Tuesday.

The eight others, including Order of Canada recipient Jean Swanson and former BC Teachers’ Federation president and Burnaby resident Susan Lambert, made their first court appearance after violating the injunction at Trans Mountain’s Burnaby Mountain tank farm on June 30.

Both Lambert and Swanson indicated they intend to plead guilty at their next court appearance on Aug. 15.

Speaking to the crowd outside the courthouse, Lambert said she values civil and lawful society and respects the law. Citing past wrongs, such as the legality of residential schools, however, she said sometimes the law needs to be challenged.

“The only way we can stop this is if every individual stands up and says this is not right,” she said.