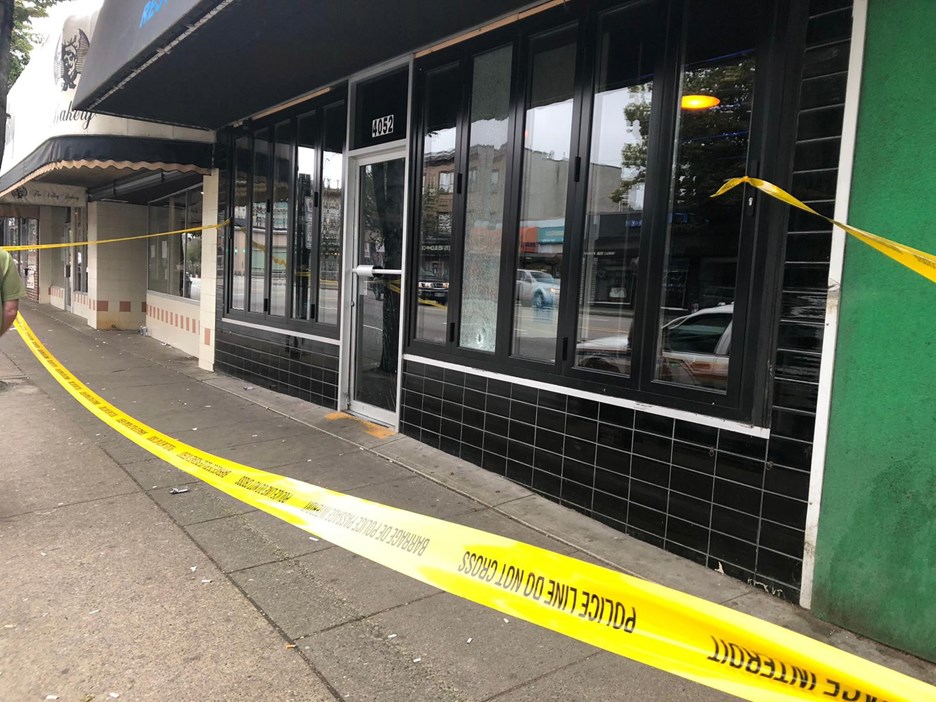 On July 1, just after 2:30 a.m., Burnaby RCMP responded to the 4000 block of Hastings Street, according to a police press release, outside the Bloo Lounge. Photo submitted

Police are investigating multiple reports of shots fired outside a North Burnaby hookah lounge in the early morning hours of Canada Day.

On July 1, just after 2:30 a.m., Burnaby RCMP responded to the 4000 block of Hastings Street, according to a police press release.

According to witnesses, a fight had broken out between a number of people outside a business in the area, and multiple shots had been fired at a vehicle, police said.

Witnesses told police everyone involved then took off.

Later, at 3 a.m., Port Moody police conducted a traffic stop on a vehicle that is believed to have been the vehicle that was shot at, but police say the driver is currently not cooperating with the investigation, and investigators are still working to determine his role in the Burnaby shooting.

No injuries have been reported in relation to the shooting at this time, police said.

The Burnaby business where the shooting took place has been the subject of a number of police calls in the last year, including seven in June alone, according to Burnaby RCMP.

Police didn’t identify the business, but neighbours have told the NOW the shooting happened outside the Bloo Bby Restaurant hookah lounge at 4052 Hastings.

The lounge has sparked complaints since it opened last year, according to Dan Killey, who lives in a 38-unit strata across the back alley.

The strata has made numerous complaints to police and the city about the business, he said, and launched a petition calling on the city to shut it down.

WARNING: Some salty, albeit repetitive, language in this video of a fight outside Burnaby’s Bloo hookah lounge on June 14 pic.twitter.com/DxodPYavnR

Killey said neighbours have had to put up with noise, garbage, public urination and fights between patrons who “party into the alley and nearby parking lots at many hours of the day.”

The shooting has only increased the neighbours’ concerns.

“We have had continued frustration with this business since they opened and this definitely would introduce significant safety concerns for the families that live across the alleyway,” Killey said.

Another neighbour, who asked to remain anonymous for personal safety reasons, said she and her husband heard the shots fired in the early morning hours of Canada Day.

She too would like to see the business shuttered but doesn’t believe the problem would end there.

“There’s a bigger issue at hand here with the city approving this kind of licence,” she said. “If (the city’s) hands are tied legally, what about community safety? Where does that fit into the priorities? There are apartments above these commercial spaces.”

Police are continuing to speak to witnesses in order to get a firm description of those involved in the fight and the shooting.

Police are also asking anyone who might have dashcam video from the area of Hastings Street and Gilmore Avenue at around 2:30 a.m. on Wednesday morning to contact police.

Burnaby RCMP told the NOW last month that police were concerned about a spike in gang violence in the city after four shots-fired calls this year.

Police believe those shootings were connected but say it's too early to tell whether the Canada Day incident is also linked.