Several protesters chained themselves to a gate leading into the Chevron Refinery in North Burnaby on Friday morning in a stand against exploitative resource extraction in Canada.
May 30, 2014 11:36 AM By: Jacob Zinn 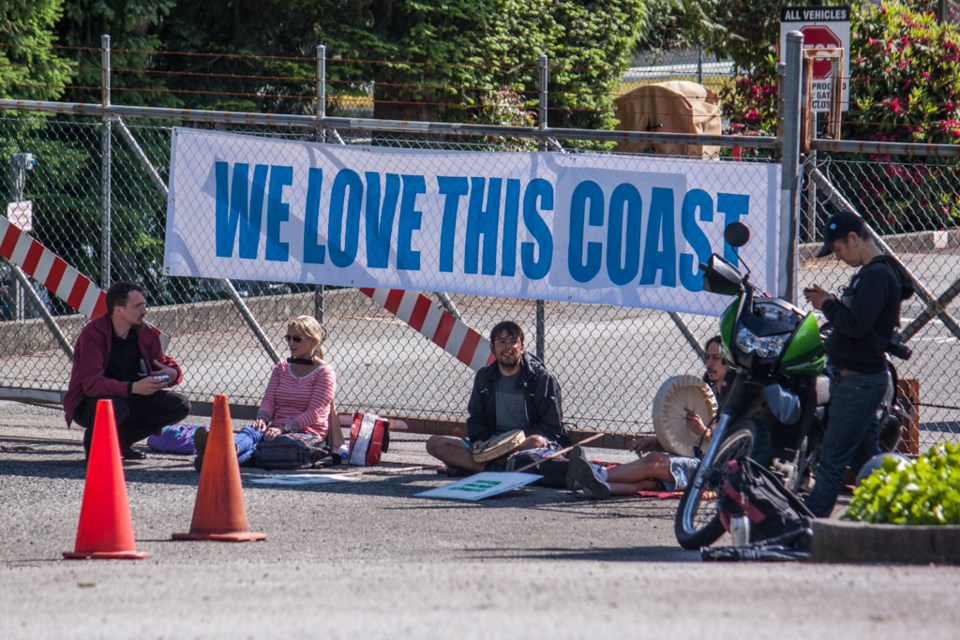 Three environmental activists used chains and bike locks to secure themselves to a gate leading into the Chevron Refinery in North Burnaby early Friday morning. The trio were protesting against "exploitative resource extraction" such as fracking, as well as the Pacific Trail Pipeline in Northern B.C.Jacob Zinn

Several protesters chained themselves to a gate leading into the Chevron Refinery in North Burnaby on Friday morning in a stand against exploitative resource extraction in Canada.

Activists Dan Wallace, Mia Nissen and Adam Gold spurred a lockdown at the facility by securing themselves to the gate using bicycle D-locks and chains, preventing truck traffic from entering and exiting the refinery. Among their concerns, the protesters noted they are opposed to the Pacific Trail Pipeline, a natural gas pipeline that Chevron is planning to build in Northern B.C.

According to a statement from the activists’ spokeswoman Shirley Samples, the protest was also meant “to draw attention the federal and provincial governments’ complete disregard for the earth, Indigenous sovereignty, and the reality of climate change.”

“We want to demonstrate the extreme measures that ordinary citizens are willing to take,” reads the statement. “We want to show that each person has the ability to act, and that we must act for the sake of ourselves and future generations. Like many others taking a stand, we feel a moral obligation.”

The statement said the federal and provincial governments are seemingly unwilling to make changes, claiming the B.C. government’s budget is based on predicted revenue from fracking and that the federal Conservatives have done “extensive spying” on environmental groups.

Samples said the group intended to stay until Chevron and its partners withdraw all permit applications and stop construction on the Pacific Trail project, adding that protesters were willing to face jail time. However, around 10:30 p.m. that night, police sawed off the bike locks and arrested the protesters, putting an end to the rally. They were subsequently released around noon on Saturday.

“Thank you to everyone for the overwhelming support,” wrote Nissen on her Facebook profile. “I’m feeling a little tired but morale is high in the knowledge that we did the right thing yesterday and for the right reasons.

“This is a movement built on mutual support and it was crystal clear to me yesterday through everyone’s kindness and generosity. Collectively, we are doing a beautiful thing for each other and the planet… let's stay strong and keep fighting these toxic, maniacal industries on all fronts: legal, political and direct action.”

Similar protests have been staged outside the Chevron Refinery in recent years. In 2013, about 100 protesters rallied outside the facility to oppose the Pacific Trail Pipeline.