An explosion at a fuel storage facility in Crockett, CA on Tuesday didn’t just send a giant fireball into the air – it rocked the world of Burnaby’s Forest Grove residents.
Oct 18, 2019 6:00 AM By: Chris Campbell 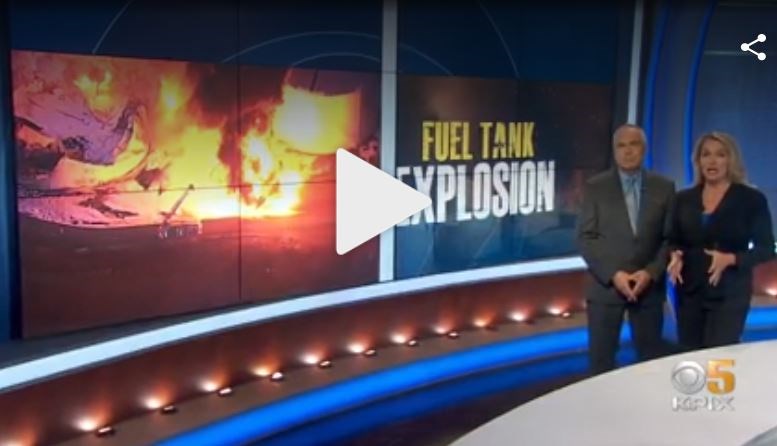 TV coverage of a fire at a fuel tank facility in California. Screenshot

An explosion at a fuel storage facility in Crockett, CA on Tuesday didn’t just send a giant fireball into the air – it rocked the world of Burnaby’s Forest Grove residents.

Residents like Yvonne Gall live next to Trans Mountain’s tank farm on Burnaby Mountain and they worry the same thing that happened in California could happen here.

The explosion shook buildings and rattled windows for miles around, igniting a fire that burned for hours. An article in the San Francisco Chronicle questioned if a nearby 4.5 quake triggered the explosion.

Gall says that Burnaby is in a quake zone like the rest of Metro Vancouver and she fears what could happen to the tank farm.

“It's definitely alarming,” said Gall, who is one of several residents who filed a statement of opposition to the Trans Mountain pipeline expansion on Sept. 18 with the new Canada Energy Regulator that has replaced the National Energy Board.

Gall said in the letter that the project creates “unreasonable risk” and the California explosion is just another example of the risks to residents living near such facilities.

“Tuesday's tank farm explosion and fire at a facility in the San Francisco Bay area has also served to underscore our fears,” Gall said. “The fact that the Trans Mountain tank farm expansion has been green lighted without identifying a safety plan seriously puts our neighbourhood at risk.”

The Burnaby Fire Department has also expressed concerns that a detailed fire safety plan does not need to be submitted by Trans Mountain until later in the process.

“Needless to say this latest fire at the refinery in California is generating a lot of concern and confirming many of the fears we have about the Trans Mountain tank farm,” said Gall.

“Our facilities are designed and operated to industry best practices and meet the most stringent fire safety standards, many of which exceed regulatory requirements. For example, fire-safe operations at our Burnaby Terminal include measures for early detection and fire suppression systems, operational procedures to reduce possible risks, training exercises, site-specific fire pre-plans, oversight by the Canada Energy Regulator (CER) and compliance with the American Petroleum Institute and National Fire Protection Association (NFPA) standards.

“In more than 65 years of operation in Burnaby, we’ve never had a storage tank fire. Although tank fires world-wide are extremely rare, we constantly review, test and update our prevention and emergency management programs to ensure our terminals operate safely. We are confident we can prevent and respond to any kind of incident today and into the future.

“As part of regulatory requirements and according to industry best practices, in-service tanks are checked daily and requisite inspections occur daily, monthly, annually and every five and twenty years; each with specific protocols. We additional safety measures at Burnaby Terminal, such as having trained emergency response technicians, 24/7 monitoring for early fire detection and an advanced on-site fire suppression system, which includes a rapidly deployable specialized sprinkler system designed for forest fire protection and protection along our fence line.

“The design location and spacing for the new terminal tanks meet all relevant regulatory requirements and are consistent with environmental best practices of using existing infrastructure to minimize disturbances. The tank locations will result in set-backs greater than those established in Burnaby bylaws.”