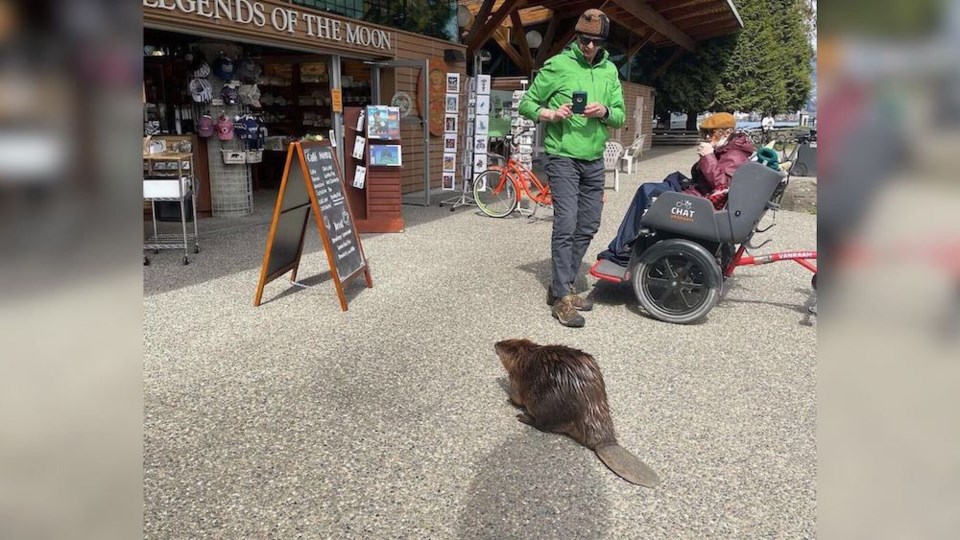 The Legends of the Moon Gift Shop in Stanley Park took to Instagram to share a video of an adorable brown beaver waddling around its shop. Photo via legendsofthemoonstanleypark / Instagrams

It isn't uncommon to spot a beaver in Vancouver's sprawling Stanley Park. However, one resident rodent made an unusual appearance at one of the park's gift shops this week.

On Tuesday (April 6), Legends of the Moon Gift Shop took to Instagram to share a video and a few snaps of an adorable brown beaver waddling around outside its shop.

In the video, the adventurous rodent slowly strides past a tree and stops to sniff the air before carrying on. The photos show the aquatic mammal near some totem poles as well as out front of the gift shop.

In one picture, the beaver appears to pose for a man who is snapping a photo of it.

Have a look at the rare sighting.

A post shared by Legends of the Moon (@legendsofthemoonstanleypark)

Known for building large dams, lodges, and canals, you're more likely to see evidence of beavers than you are to spot one of the large rodents. So, when the first beaver was spotted in Stanley Park's Beaver Lake in over 60 years, it made a considerable splash.

In 2008, the first semi-aquatic herbivore mysteriously appeared in Beaver Lake after an extraordinary hiatus. No one knows how it got there, but a second one joined it in 2011. Afterward, the pair had kits.

Vancouver Is Awesome spoke to Ariane Comeau, Conservation Projects Manager at the Stanley Park Ecology Society, about the park's semi-nocturnal rodents, as well as what role they play in the park's ecosystem. She notes the creatures are a keystone species, which means they play a vital role in sustaining other species in an ecosystem.

"The beavers eat the water lilies, which are an invasive species in the park," remarks Comeau. "The lilies cover so much of the water, and the beavers also pool water and make it deeper."

By eating the lilies, Beavers allow more space for fish, invertebrates, and birds. More comfortable in the water, Comeau adds that they create channels while they swim. She notes that they are able to move more quickly in the water, which keeps them safe from natural predators such as coyotes and river otters. In front of the lodge in Beaver Lake, she notes that they have cleared a significant amount of lilies from the water.