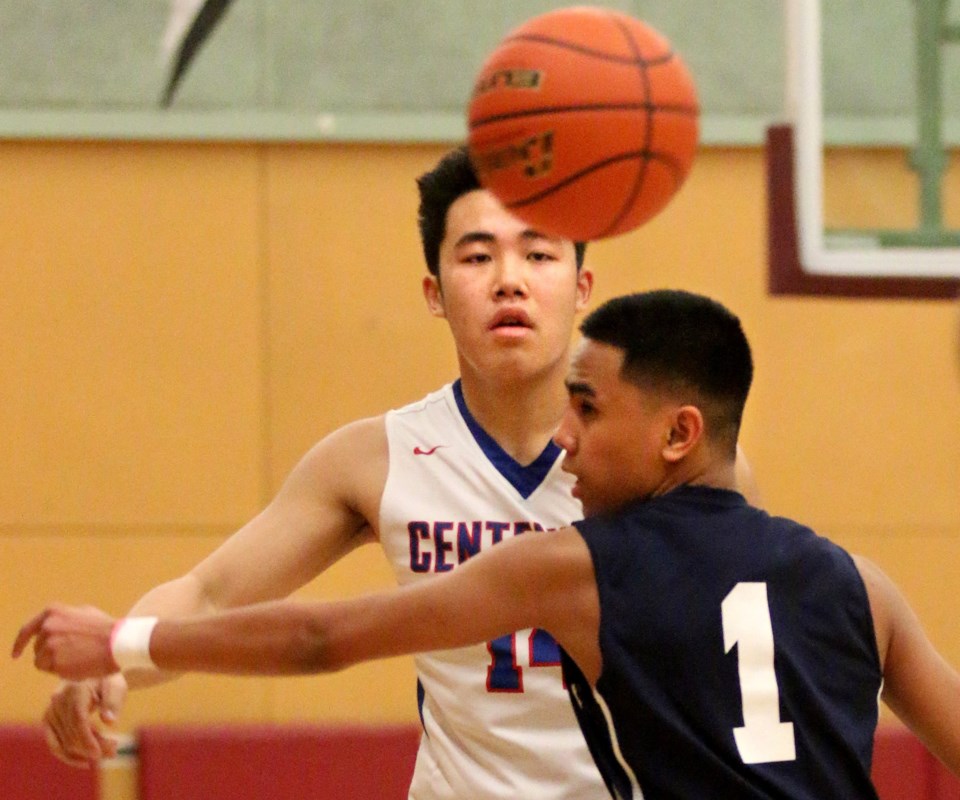 The Alpha Aztecs' Jake Gaspar, at front, battles a Centennial rival during a game last year. The Aztecs will enter next week's season having established a reputation for dogged hardwork and determination in their pursuit of a berth to the 3-A Lower Mainlands.Mario Bartel

As underdogs go, it’s always best if you’re following the alpha one.

The Alpha Aztecs are a prime example. The senior boys basketball team is gearing up for next week’s playoffs with an eye on pushing the envelope, thanks to a confidence-building string that has put the north Burnaby squad in a positive light.

And while they have yet to solve the Burnaby South, Byrne Creek and New Westminster trifecta – nor have any of the other others on the southern portion of the league standings – at the bare minimum the Aztecs are earning respect and attention in a year where the same-old, same-old is a tough trend.

The senior-heavy Alpha lineup hasn’t ripped up the league, nor absolutely blown any rival away. But by being in nearly every game, stubbornly sticking together and winning their share, the team has earned the right to be considered a ‘going concern’ by opposing coaches.

If you ask Alpha coach Eric Chen, its all part of a lengthy process.

“Alpha has a team that’s a pleasure to work with; not only are they enthusiastic about basketball, but they have also grown on me after close to five years of working with them,” Chen said in an email.

They’ve had their ups and downs, as is expected with a 14-13 record, but a closer look at just the past month shows a scrappy Aztecs group that doesn’t give up.

At the Midtown tournament last weekend, Alpha blasted Chilliwack 92-47, battled eventual champion Guildford Park down to the final minute in a 66-62 loss, then bounced back to beat host Eric Hamber 86-74 to finish on a high note.

Sam Van Snellenberg and Marco Dasovic were named to the Midtown all-star team.

“The team showed an intensity not seen before …, with the players working as a team, as well as a fierce defence,” said Chen, who works alongside Paul Bhangoo.

Daniel Martin and Dasovic, part of the 11-strong Grade 12 core, anchor a strong defence. Dasovic and Van Snellenberg carry the captains’ title, bringing a respect and responsibility to the floor every practice and game.

“(Dasovic) has shown promise with his leadership this year in the way that he creates opportunities for his team on offence, and always giving constructive advice to his teammates,” noted the coach.

In the tourney final, Guildford Park took down Aztecs’ rival New Westminster 88-77. In their league match, New West prevailed by 40 points, but Alpha had just six players dressed for that game.

Earlier this month at the Bob Carkner Memorial tourney in Richmond, Burnaby’s reps finished 2-1, with two games going into overtime. They edged the host Steveston-London Dragons 87-86, before succumbing to Lord Byng 73-66, both in extra time.

That was the squad’s third overtime game of the month, having pushed Hugh Boyd to an extra period in the second week where the end result was an 88-81 loss.

Sandwiched around these results have been plenty of regular season league encounters, where they knocked off Burnaby North 95-86, or hung tight before falling 81-65 to fellow 3-A divisional rival Byrne Creek – the same Byrne Creek that were provincial finalists in 2018.

Although they were edged 80-77 by Cariboo Hill on Wednesday, the Aztecs have another shot at building momentum for the playoffs and a run for a Lower Mainland berth. They visit Burnaby South tonight (Thursday) in a game of David vs. Goliath.

Although their 3-3 record puts them in the same logjam as 3-4 Burnaby North and Cariboo Hill, it’s in their defence where they’ve separated themselves. Alpha is the only team among the bottom five squads to post a positive mark in points differential, with one game remaining. They sat plus-four prior to the showdown with reigning 4-A provincial champion Burnaby South.

The league playoffs begin Monday when they are slated to play 7 p.m. against either Burnaby North or Cariboo Hill.

The list of teams they’ve beaten, or lost to by a margin of 10 or fewer, includes Notre Dame, McRoberts, RC Palmer and Riverside. While not a murder’s row, an eclectic group for sure.

Bhangoo says the team has shown all through the year that they can hang with anybody.

“We’ve been in so many games. I feel if our shots drop we can beat anybody,” remarked the assistant coach.

“The goals for the season were to improve the individual skill and team work as well as qualifying for the Lower Mainlands,” he said. “The team has stepped up with leaders stepping up, players committing more to their positions on the court.”