What was once long ago became the here-and-now for École Alpha Secondary’s Sava Savkovic. It wasn’t just once, but twice now that the former gold-level soccer player aced another sport – gymnastics – at the B.C.
Apr 25, 2019 10:30 AM By: Dan Olson 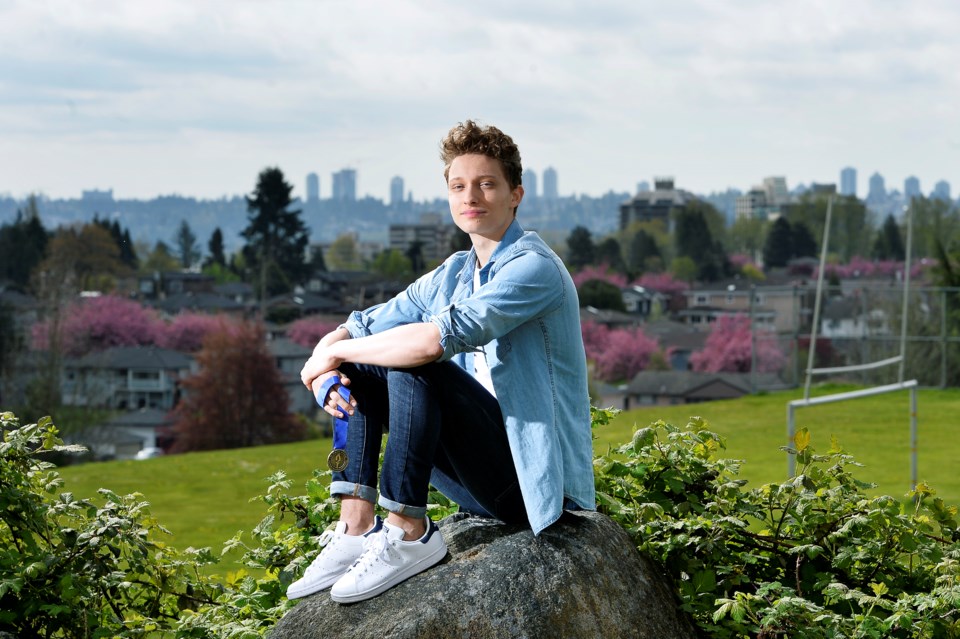 What was once long ago became the here-and-now for École Alpha Secondary’s Sava Savkovic.

It wasn’t just once, but twice now that the former gold-level soccer player aced another sport – gymnastics – at the B.C. High School championship meet last month.

The Burquitlam resident demonstrated that last year’s return to the sport – after a 10-year absence – was no fluke, capturing the male Level 2 title, picking up top marks in three of the five events.

Although most would be surprised that someone could come back to such a regimented and exacting activity after having just little more than a year of it as a child and then ace it, that is exactly what the teen had planned to do.

“I set my goals pretty high,” Savkovic said of his re-entry into the sport last year. “When I started (last year) my dad thought competing in the provincial (high school) competition wouldn’t be smart; that I wouldn’t be ready – there were like four months of training before the provincials.

“Just the four months of training, which I did pretty intensely. I set my goals really high, I wanted to compete for Level 1 and I wanted to win as provincial champion, but I wasn’t really sure.”

He won the Level 1 competition, and this year jumped up to Level 2, and didn’t flinched.

The Burquitlam resident counted gold in floor, rings and parallel bars, while finishing third in both pommel horse and vault.

You could say it seemed like old times, but, as a five-year-old, Savkovic didn’t get a huge taste for competition before leaving the sport behind. Although his father is a coach of the sport, external pressures like cost and travel forced the young boy to focus closer to home. That led him to soccer, where the former Holden Avenue resident rose up the ladder with Cliff Avenue and Coquitlam Metro-Ford.

But a few years ago, he found the spark for that sport flickering, then snuffed out. Suddenly, his passion for competition and sports turned his attention to something completely different.

“I just kind of lost my love for (soccer),” he said. “I was, in a way, dreading going to practice. It just wasn’t fun anymore. I decided to quit and after that, for a couple of months I wasn’t doing anything, then I decided I wanted to do something and started back up in gymnastics. It just went from there.”

Although last year he worked at a Richmond club where his dad coaches, he had to find a new place to workout this year. Savkovic joined some friends at a drop-in group at UBC, making the three-hour, round trip commute three-times a week.

Of the five events, the ones where strength was a major component, like parallel bars, rings and pommel horse, gave him the greatest satisfaction.

“A lot of the strength events in gymnastics are my better ones, like rings and parallel bars. I’d say parallel bars are my favoutie. My floor improved a lot from last year, and that’s from the flexibility I worked on.”

The payoff was well worth it, he said.

“I was (confident). When I competed Level 1 last year I was unsure of how I’d do. I didn’t know how the competition would look like (this year) but I knew how I was and how much I’d practiced, so I was confident in what I could do. I was confident I’d get a podium finish.”

And while he’s keeping his options open to possibly continuing the sport as a recreational training hobby, Savkovic says the biggest reward was in knowing that he could challenge himself, and succeed.

“That’s what it is. I learned that taking risks is a huge part of life. If you take a risk and set your mind to it, it can really pay off, especially if you re as determined as I was. Especially this year, travelling to UBC, took a lot out of me, but I set my mind to it. I believe determination, along with motivation and taking risks, are a great thing to do.”