Balanced attack carries Rebels past Gators in BC opener

Next man up has been a philosophy in play for much of the season for the Burnaby South Rebels. It would prove once again to an asset in their opening game of the B.C. 4-A senior boys basketball championship on Wednesday. The defending B.C.
Mar 6, 2019 5:57 PM By: Dan Olson 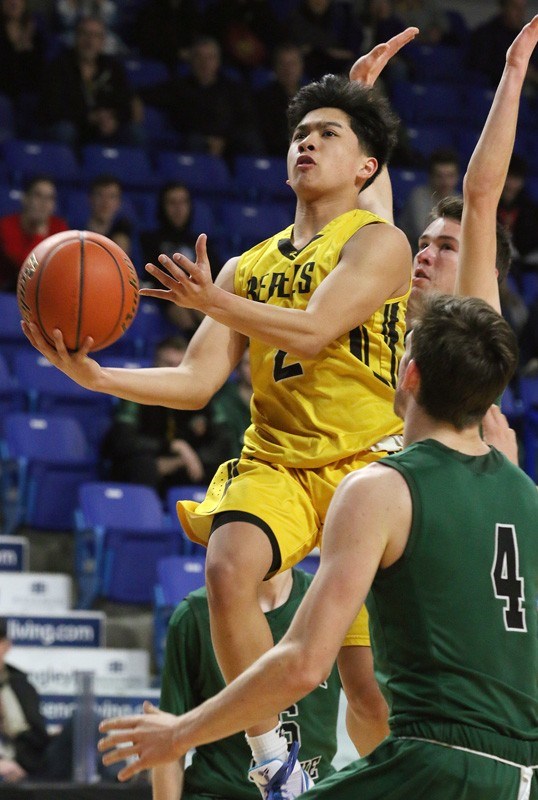 Burnaby South Rebels guard Justin Sunga takes it to the hoop in the first quarter of their opening round game against Walnut Grove at the B.C. High School senior boys 4-A basketball championship, Wednesday at the Langley Events Centre.Mario Bartel/TriCity News

Next man up has been a philosophy in play for much of the season for the Burnaby South Rebels.

It would prove once again to an asset in their opening game of the B.C. 4-A senior boys basketball championship on Wednesday.

The defending B.C. champions launched their defence against the upstart Walnut Grove Gators, who entered the tourney as the No. 12 seed, playing on a virtual home court at the Langley Events Centre.

Behind a boisterous run in the second quarter, Burnaby South buried the Gators 114-84 to advance to Thursday's quarterfinal (8:15 p.m.).

Having had to play without various pieces during the regular season, the loss of post Aidan Wilson just four minutes into the contest, on a collision with teammate Baltej Sohal under the Walnut Grove hoop, gave the Rebels a chance to flash its balanced approach.

It all started to mesh midway through the second frame with the teams separated by four points, when Grade 10 guard Justin Sunga sparked a 17-4 run and a 49-32 halftime lead.

"We kind of gathered together, we kind of went small (and) we've done it all year," said Burnaby South coach Mike Bell. "We've had injuries throughout the year and played through that."

The Rebels controlled the pace to start the second half, but Walnut Grove garnered some momentum and reduced a 23-point gap and pulled it within 12 before the No. 5-seed Burnaby squad put it away.

Sunga was one of the steadier presences on the floor, nailing the game's second bucket -- a trey, following Kyle Karmaci's first three-pointer after the Gators opened the scoring. He finished with a team-high 27 points and five steals, while Sohal counted 23 points, 15 of which came in the third quarter. Also contributing big points and a great work along the boards in Wilson's absence were Grade 11 standout Sasha Vujisic, with 18 points and 16 rebounds, and Jiordano Khan, with 22 points and nine boards.

"Sunga's age doesn't matter. He's one of the best players in the province, regardless of what grade he's in. He's a phenomenal warrior -- he was back in our youth program at (South Burnaby Metro) as a Grade 2 playing against Grade 7s.so playing at an older level is nothing new to this kid," said Bell.

The 4-A circuit saw a couple of major upsets on opening day, with the top-two Lower Mainland squads getting bounced to the consolation bracket by heavy Fraser Valley underdogs. No. 2-ranked Kitsilano was dusted 81-68 by 15th seed Heritage Woods, while the Centennial Centaurs shocked No. 6-ranked Vancouver College 83-82. The two teams' paths crossed three times in December, with the Rebels prevailing by scores of 85-69, 69-52 and 101-66.

For Burnaby South, the Centaurs are the next one up, opponent-wise, but one to not take lightly.

"You can't take any team for granted. As you know, we've had our own losses. ... We've bounced back and we're here. This was a good game for us," added Bell.

The winner of Thursday's game will advance to Friday's 7 p.m. semifinal. All games are at the Langley Events Centre.