The BC Hockey League is returning to Burnaby for the first time since 2010. But it will only be a brief visit of five weeks, as the league's pod of Lower Mainland teams including the Coquitlam Express will play a five-week season at the Scotiabank Barn.
Mar 17, 2021 7:52 AM By: Mario Bartel 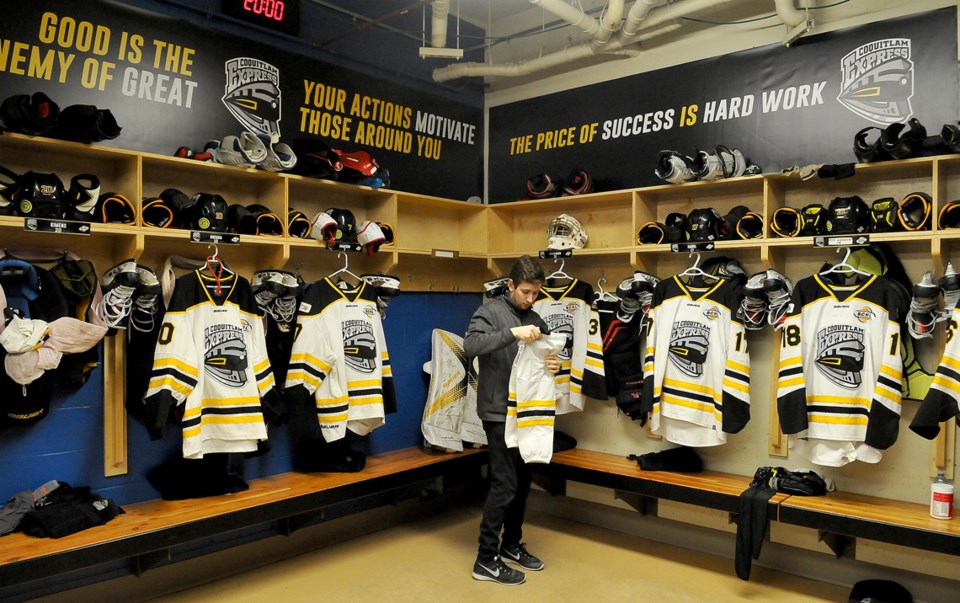 The Coquitlam Express will be transferring some items, like signs and banners, from its dressing room at the Poirier Sports and Leisure Complex to its pod facility at the Scotiabank Barn in Burnaby to help create a familiar environment for players as they prepare to return to game action after months of practising because of public health restrictions.MARIO BARTEL/TRI-CITY NEWS FILE PHOTO

The BC Hockey League is returning to Burnaby. But you won’t be able to enjoy any games.

The Junior A circuit is basing its pod for three South coast teams to play a five-week schedule of 18-20 games at the Scotiabank Barn, known formerly as Canlan 8-Rinks.

The Coquitlam Express is the host team. But when its home arena, the Poirier Sports and Leisure Complex, wasn’t made available because the ice must be removed for an anticipated lacrosse season, the team looked to Burnaby where it played previously for five years.

Express general manager Tali Campbell said the Scotiabank facility on Sprott Street fit the bill with available ice time, enough dressing rooms and proper COVID-19 safety procedures to accommodate the truncated season that finally received a green light from provincial health authorities last Friday. Other pod cities and a schedule have yet to be officially announced by the league.

BCHL teams had been confined to holding just socially-distanced practices and individual drills since last November because of increased public health restrictions as COVID-19 infections escalated through the fall and winter. Prior to that, the league had been playing exhibition games in regional cohorts since late September.

Campbell said players are eager to get back to playing competitive games.

“There’s not one guy in that dressing room who’s not eager to go,” he said, adding players still looking for college scholarships are keen to show recruiters what they can do, and those already with a commitment to a post-secondary program want to get their game legs back.

The Express will be grouped with the Surrey Eagles and Power River Kings. The Langley Riverman was supposed to be part of the pod, but opted out of the season last Saturday.

Campbell said after players and coaches get through a mandatory two-week quarantine that started last Friday, they’ll regroup for a brief four-day training camp before playing about four games a week beginning April 2 through to early May. Whether there’s any kind of post-season will be determined by the state of the pandemic and public health regulations, he added.

During the season, players and coaches from the Eagles and Express will travel to and from the rink and their billet homes individually. The River Kings will be put up at a hotel.

Players and coaches will be tested for COVID-19 before the season starts, and then randomly afterward. Support staff like referees and off-ice officials won’t have to follow quarantine procedures, but they will be expected to follow safety protocols like social distancing. The league has hired a medical safety officer to supervise all public health rules as well as the testing program.

No spectators will be allowed at the games.

The BCHL’s return to play comes after several months of negotiations with provincial and regional public health officials, said commissioner Chris Hebb in a statement.

“This entire process has always been about our players and giving them the best chance to get back to playing games and showcasing their skills.”

Campbell said the months since the exhibition season was shut down have been difficult on the entire organization. He released some players to pursue their own opportunities and traded others, like starting goaltender Joe Howe and veteran forward Cooper Connell, to teams in the Alberta Junior Hockey League, which resumed playing games March 12.

The Express is also on its third coach since its run for a league and national championship was abruptly halted by the public health crisis last March. Jason Fortier, who guided the team to the best record in the BCHL last season, was unable to reach agreement on a new contract last April. His replacement, Dan Cioffi, stepped down March 6 “to focus on his family” and pursue “a new opportunity.”

It was Cioffi’s second tenure with Express. He was an assistant for three seasons when the team was based in Burnaby.

Campbell said the pandemic has been financially difficult for the Express, which is celebrating its 20th anniversary next season. Without gate revenue to pay the bills, the BCHL shifted to a pay-to-play model that charges players’ families a fee. A similar structure is followed by other junior leagues in the province, like the Pacific Junior Hockey League that includes the Grandview Steelers.

Campbell said those families will be tapped again to help cover the expense of the pod season, that includes putting up the squad from Powell River in a hotel for five weeks. The league is also continuing negotiations for financial aid from the province.

“It’s a big gamble,” Campbell said of the added burden. “But we need to get these guys back on the ice.”

The Express is owned by Burnaby hotelier, Fayaz Manji. His acquisition of the team in October, 2019, led to some speculation that it might be headed back to Copeland Arena where it was based from 2005 to 2010 as the Poirier complex was undergoing a major renovation and expansion, but he quickly signed a five-year lease extension with the city of Coquitlam.