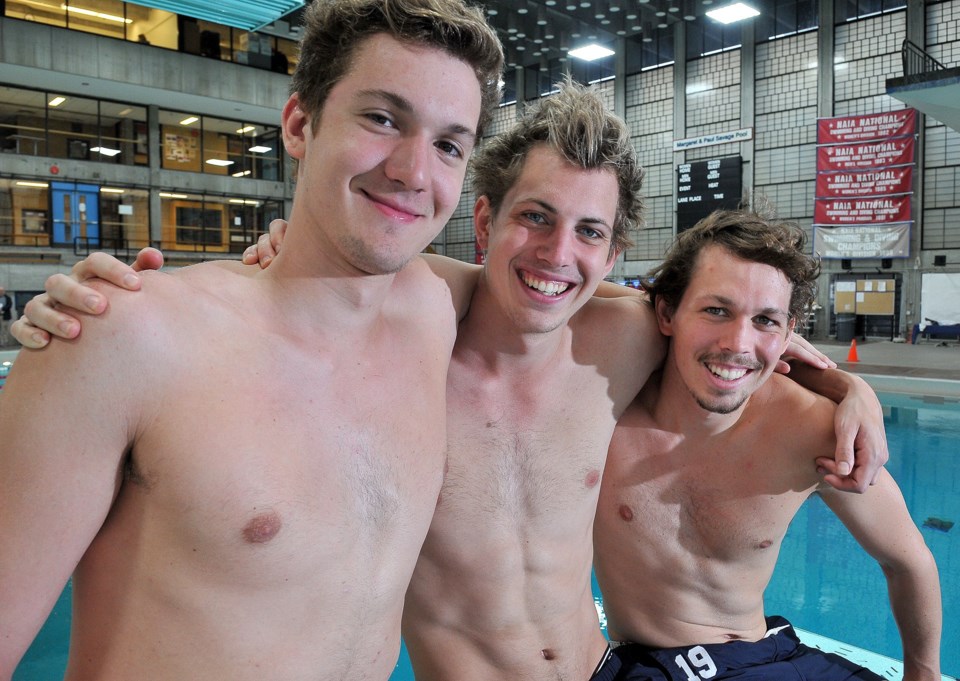 Growing up, the pool proved to be a second home for three boys from Coquitlam.

Now, it’s where a big part of their schooling is done.

The Woinoski brothers – Tim, Andrew and Alex – find themselves on a quick Simon Fraser University swim team in the competitive NCAA Div. 2 circuit.

And while they’ve grown up and learned plenty of lessons in the deep end, what continues to be a strength that propels them onward is their strong family bond.

“(Tim) really showed me how to be tough and work through stuff. He’s like my guide, and the way I train is based on how persistent and hardworking he is,” says Andrew, mapping out the realities of a middle brother. “(Alex) is a little different because he’s chasing me. I’m trying to keep him away, but once in a while he does something crazy (good). Now this kid is competing with me.”

The Woinoskis were part of SFU’s success in a meet in Hawaii two weeks ago, finishing one-two-three in the 1000-yard freestyle event. Tim’s time of 9:35.33 eclipsed his brothers by more than 20 seconds each.

From the pool to school, the three have stuck close together and even pursued the same discipline when it comes to water sports, preferring long distance races to sprints.

“We were all brought up by exceptional coaches, and I’d like to say we’re very hard workers, so when it comes down to these competitions, we’re meant to do well,” said Tim, 23. “We drastically prepare to swim fast at these (meets).”

Although the three are best of buddies, their inner competitive nature is something that drives them onward. Through the years they’ve learned to wipe the slate clean after each race, cheering each other on while also aiming to get the last laugh in the coming race.

“Definitely, I’m always chasing them to beat them but there’s also a lot of guys there. I’m always looking to improve,” remarked Alex, at 18 the youngest, but also, at six-foot-four, the tallest.

“They’re competitive, too. Everyone is looking to win, and they’re no exception. We get along great. We never have any issues.”

Of course, that wasn’t always the case. Sibling dynamics often begin as a combustible force, and the Woinoskis were no different.

“When we were younger we fought a lot, honestly. We just fought, physically and mentally. When we got older we all connected through the sport we were doing,” said Andrew, 20. “We get along really well now, so it’s definitely an asset.”

All graduates of Burnaby Mountain Secondary, the Woinoskis came to full-time swimming at a later age than most university-level competitors. As members of the PoCo Marlins summer swimming club, they found a sport where they could chase a time rather than each other. Strong coaching and great parents provided all the encouragement they needed, says Tim.

“My mom is quite the mom – she’s really caring and an A++ mother. One of the first things she wanted for us was to swim. I was a pretty bad swimmer at water-babies. She’d put us in swimming lessons and we completed them pretty quickly, even though I repeated Level 7 about five times,” he said with a laugh.

It wasn’t until high school that they shifted to year-round swimming with the Simon Fraser Aquatics club, based out of SFU, Central Park and the Tri-Cities.

“You can only go so far swimming three months of the year, so (PoCo head coach Mike Wylie) was encouraging me. He knew the coaches in this program and he encouraged me,” remarked Alex.

The SFA coaches include SFU coach Liam Donnelly, so a lot of the training practices and preaching done at SFA helped in the transition to university.

“I had a big breakthough (last year),” noted Andrew. “The first year I didn’t qualify for nationals.
The second, I qualified for nationals and made All-American as well, which was a pretty big jump for me. That was really exciting.”

An All-American honour is also one of Tim’s achievements, having reached it twice. Last year he red shirted with an eye on sticking around for Alex’s first year. Now he’s made up for lost time, putting up times to be in the hunt for an NCAA berth, as has Andrew.

“Every single (NCAA championship) is such an amazing experience. What they have going there is really inspiring. It makes you understand why you are a swimmer. The competition just sends shivers down your spine,” said Tim.

At the Cleveland, Ohio-hosted Magnus Cup in November, the three were part of an SFU sweep in the 1650-yard free final, with MacKenzie Hamill, Andrew and Tim leading the way.

Donnelly said the dynamics the trio has brought to the team have been exceedingly positive.

“It’s a healthy competition. Competition is great, and you push each other to win, but after it’s done they love each other, they cheer each other on, and they’re great teammates,” said Donnelly.

On the heels of Andrew’s breakthrough last spring, where he posted multiple top-eight results at the NCAA Div. 2 championships, he notched a pair of top-12 finishes at the Canadian national championships – placing 12th in the 1500m free. In ninth spot was Tim.

In fact, whether it’s in the pool or open water competitions like in Penticton, where the brothers dominated two years ago – there is going to be a Woinoski leading or pushing the pace. It’s their nature.

“(Tim) is a very good training partner,” remarked Andrew. “We’ve always been side-by-side training and whenever no one else is around, me and him are always the ones left just training (together). I don’t even see him as a competitor anymore, really. He’s always there – he’s ahead of me, oh, he’s there – and I’m so use to it.”