Clear your calendar -- the boys are back. The Byrne Creek Bulldogs and Burnaby South Rebels each locked up their respective berths to the B.C. high school boys basketball championships, which hit the court next week at the Langley Events Centre.
Mar 2, 2019 12:38 AM By: Dan Olson 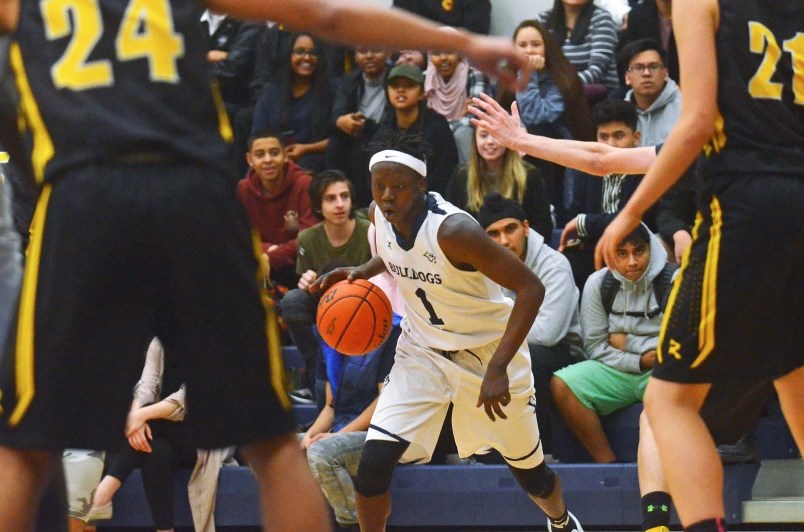 Byrne Creek's Bithow Wan was a main contributor to his team's run at the 3-A Lower Mainland championships, as the team finished third and secured a spot at next week's provincial championships in Langley.NOW file

Clear your calendar -- the boys are back.

The Byrne Creek Bulldogs and Burnaby South Rebels each locked up their respective berths to the B.C. high school boys basketball championships, which hit the court next week at the Langley Events Centre.

Both teams completed their Lower Mainland tournaments on a win streak, hoping to carry that over to the B.C.s, which run March 6 to 9.

The Bulldogs wrapped up the 3-A Lower Mainlands on Friday with a hard-fought 81-76 win over Steveston-London to finish third. The key win, however, came Thursday when the secured a top-four result with an 82-64 triumph over a feisty Magee Lions squad.

In that must-win contest, Byrne Creek got a first-half scare when the Vancouver squad dashed off to a 23-18 lead, getting 13 points from sharp-shooting guard Harvie Dorado. The Magee junior call-up canned four treys in the frame, and gave pause to Burnaby coaches who would find a way to address the long game over the remaining 24 minutes.

But first, Byrne made its first lengthy run to kick off the second quarter with a 13-0 stretch, keeping Magee off the scoresheet for the first 4:30. The Vancouver school however replied and pulled even, but a steal by Sufi Ahmed, followed by a layup, got the Bulldogs a 35-33 lead at halftime.

Magee chipped in the first six points of the third quarter, and sized up a 46-44 lead midway through the frame on Dorado's fifth and final three-pointer. But Ahmed tied it with two from the free throw line, followed by Chida Nkologu's trey with three minutes left. Bithow Wan tipped the scales for Byrne with a jumper and four successive free throws, and the final dagger was delivered when Grade 10 guard Mukhtar Afadish poured in back-to-back treys to kick-off the fourth quarter.

Byrne Creek would start the last frame on a 19-4 run that guaranteed last year's provincial 3-A finalists a repeat trip to the B.C.s.

Burnaby South, meanwhile, completed their endurance test with flying colours on Friday, placing third at the 4-A Lower Mainlands and earning the third and final berth to the 4-A championships. As reigning champions, it provides them an opportunity to defend their title, as well as redeem themselves from an error this week that bumped them out of a chance to claim a second consecutive Lower Mainland crown.

With only three berths to the B.C.s on the table, Burnaby South had to do it again on Friday against unranked Sir Winston Churchill. They did it, blitzing the Vancouver school with a well-rounded attack in a 101-66 decision and paving a path to Langley. Vujisic, who would be named to the first all-star team, collected 24 points, 17 rebounds and two blocks, while Khan, a fellow first-team selection, tallied 23 points and five assists. Recording 22 points, seven rebounds and six assists was Jason Sunga.

The Rebels' Baltej Sohal was named to the second all-star team.