Burnaby Central's Duggan takes rugby to the next level

Lynden Duggan’s tried the gamut of sports, and excelled at a few of them. When it came to choosing a favourite, it was almost like rugby chose him. The pace, grittiness and grace that the game requires fit him to a ‘T.
Mar 26, 2020 1:54 PM By: Dan Olson 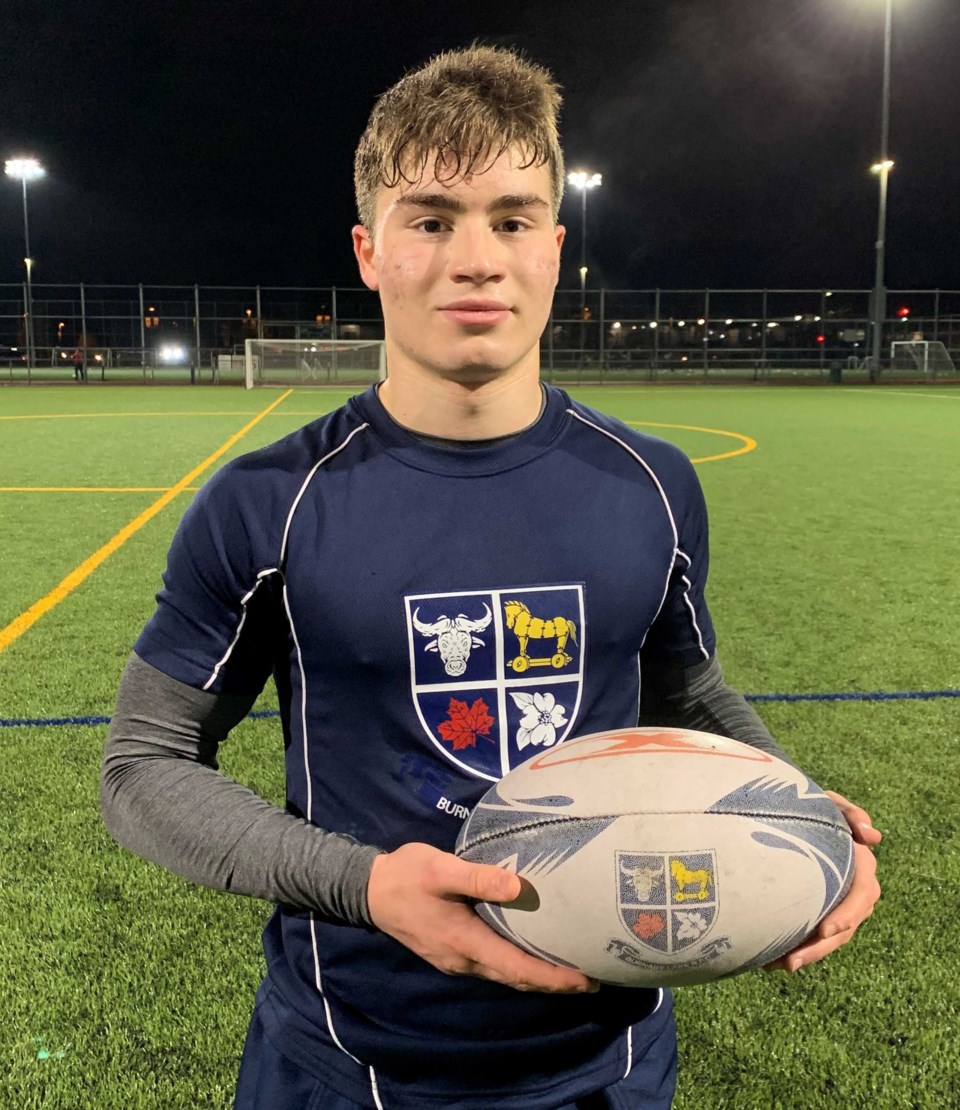 Burnaby Central's Lynden Duggan has carried the ball as a member of Team B.C. on the rugby pitch, and his next step in September is as a member of the Trinity Western University team.Contributed

Lynden Duggan’s tried the gamut of sports, and excelled at a few of them.

When it came to choosing a favourite, it was almost like rugby chose him. The pace, grittiness and grace that the game requires fit him to a ‘T.’

“I liked the physical aspect of rugby – there are lots of things you can’t do in other sports, like tackling the other players and running with the ball, it all really appealed to me,” said Duggan. “I’m strong and I’m fast and that’s the type of game I really enjoy.”

The Burnaby Central Secondary student has demonstrated the skill and desire to take it to the next level, as a member of the B.C. under-18 squad.

About six weeks ago, he was a key part of the Lower Mainland u18 squad that competed at the Western Canadian Sevens tournament in Edmonton. Duggan finished second on the team with six tries, and came away from the experience chomping at the bit for more elite action.

“It was a really fun experience. There were a couple of players I had played with before and some I’d played against,” he noted. “There were some players from the Team Canada 15s team and Canada’s Sevens team, who we played with and against. It was really interesting to see how I could play with and against some really elite players.”

B.C. would finish third overall in the tournament.

At five-foot-nine and 165-pounds, Duggan doesn’t cast a large shadow. At his fullback or right wing position, what matters most is speed. He enjoys being able to blast past tacklers and leading the charge into the opposition zone.

“I’m not a huge kid. … I’m quite fast so that definitely helps me in playing with the men,” said Duggan. “It’s not like just running straight at me, they have to catch me first. My physicality is another part of my game – just because I’m small doesn’t mean I don’t want to hit hard. I keep going and I’m determined to play good rugby.”

He only picked up the game two years ago in Grade 10 at Burnaby Central, but has garnered a lot of experience while playing with the Burnaby Lake premier reserve side. Following the lead of older brother Dylan, the younger Duggan went on to contribute to a B.C. title in u18, before joining BLRC’s premier reserves.

“That was a big step for me. Playing for the men’s team for the last two seasons has been really good for me,” he said. “It’s a big adjustment and a lot more physical. I really enjoy it and they help me a lot.”

A year ago, he spearheaded the Wildcats past rival Windsor, scoring five tries in a 36-34 win in the Lower Mainland Tier 2 final.

He was slated to play at the Vancouver Sevens Invitational earlier this month before COVID-19 forced the cancellation of all sports. Come September, Duggan is anticipating getting into the groove as a student and athlete with the Trinity Western University men’s rugby team.

Having turned his focus on the scrum game after playing soccer, wrestling, field hockey, basketball and track and field, Duggan thinks all those sports have an element of rugby in them. But there’s nothing quite the same as being able to plow into an opposing ball carrier, stripping the ball and dashing into open field.

“Lots of small things contribute to being a good rugby player, because it’s a tough sport,” said Duggan.