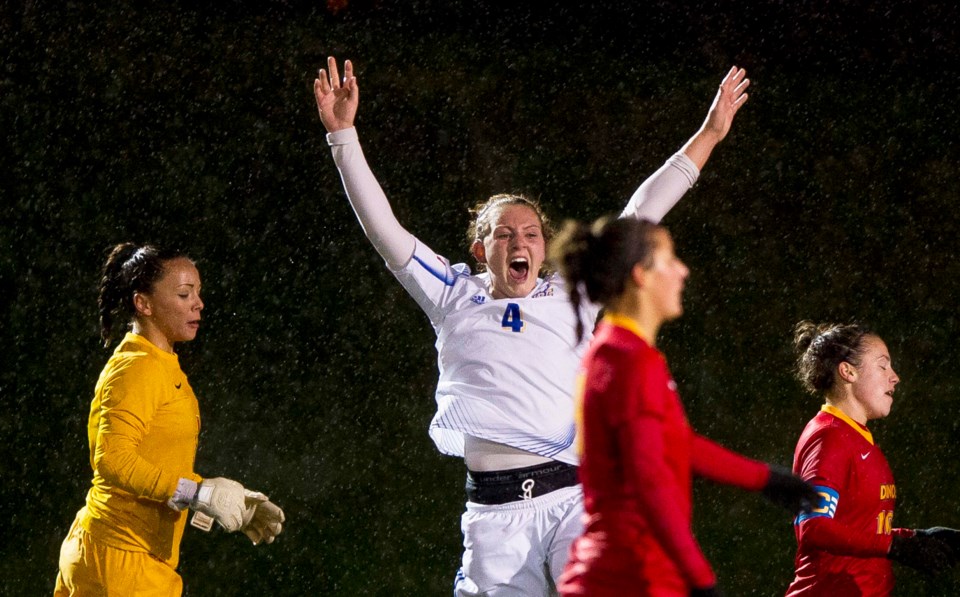 Burnaby’s Kym van Duynhoven, shown above celebrating after scoring the winning goal for UBC in the 2015 CIS quarterfinal, scored another game-winner this past weekend, this time for Western Ontario. She’s attending the London, Ont.-based university pursuing her masters degree in physical therapy.Richard Lam/UBC Athletics

Burnaby’s Kym Van Duynhoven is spending her final year of university athletics wisely.
The defender is standing guard for the London, Ont.-based Western Ontario University Mustangs, helping the women’s soccer team as it climbs the Ontario university charts.
In Saturday’s 2-0 win over Waterloo, Van Duynhoven scored the game winner in the 39th minute as the Mustangs improved to 9-0-5 on the year.
Two weeks earlier, the former UBC Thunderbirds midfielder counted a pair of goals in Western’s 4-2 doubling of Brock.
“I play defensive centre-mid so you kind of have to be offensive and defensive the whole game so just knowing where you are, where your players are at the same time is a key to that position,” said Van Duynhoven in a WOU YouTube interview after Saturday’s win.
“Our defence has been solid all season. I think we just need to work on our attacking going forward.”
The 5-foot-8 Burnaby Central product has three goals on eight shots so far this year, as the Mustangs cracked the U Sport (formerly the Canadian Interuniversity Sports) top-10 national rankings at 10th spot, after being listed as an honourable mention the past
Van Duynhoven graduated from UBC in 2016 with a degree in kinesiology, and is pursuing a masters degree in Ontario.
A year ago, the fourth-year player took on a hero’s role in converting a free kick to lift UBC past Calgary in the 90th minute of their CIS quarter-final matchup.
The T-birds went on to capture the 2015 Canadian title.