Burnaby North aims to make a statement at B.C.s

Make no bones about it, Burnaby North Vikings are glad to be there. But the senior girls volleyball team is going to test the waters and see if they can make a splash at this week’s provincial AAAA championships in Penticton.
Nov 27, 2018 3:30 PM By: Dan Olson 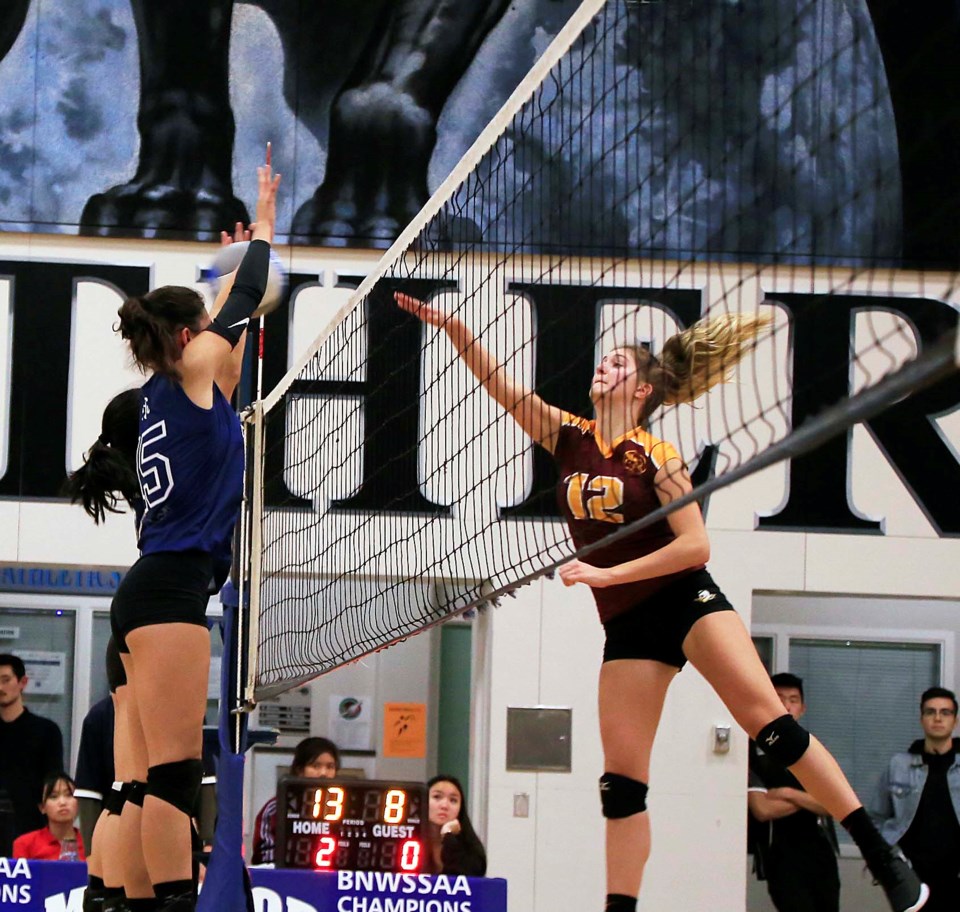 Burnaby North's Anastasia Mihic, at right, delivers a smash at the Moscrop blockers during the Burnaby-New West league playoff final. The Vikings enter the provincials this week as underdogs, but expect to cause some noise.Lisa King

Make no bones about it, Burnaby North Vikings are glad to be there.

But the senior girls volleyball team is going to test the waters and see if they can make a splash at this week’s provincial AAAA championships in Penticton.

The action starts Thursday when the Vikings open up against North Peace, followed by a tilt against Mission. On Day 2, action includes No. 4-ranked Riverside and No. 1-seed Belmont. Meanwhile, in another pool, Lower Mainland champion Moscrop launches the tourney against Maple Ridge, Penticton and Oak Bay.

For Vikings co-captain Elisa Echelli, the opportunity is what it’s all about.

“I’m very excited. Definitely, we’ve practiced hard and everyone is committed and ready,” she said. “Our goal is to go there and accomplish something.”

Burnaby North entered the league playoffs a month ago as an underdog, having finished the regular season in a three-way tie with Burnaby Central and Burnaby South for second place. But rising to each challenge, they placed second in the playoffs, falling to Moscrop 3-0 in the final.

At the Lower Mainlands, the Vikings once again came to the court hungry and advanced to the semifinals, guaranteeing themselves a spot at the B.C.s.

But they enter as one of the bigger underdogs against perennial powers like Belmont and Riverside. Head coach Erich Chou said his players are definitely worthy of the challenge.

“On a good day I think we can hang with the best teams in the province,” Chou said. “It’s a new experience for every one on our team.”

The nine-player roster includes just three Grade 12s – Gianinna Masellis, Anastasia Mihic and Echelli – and three Grade 10s. One of those younger players, Audrey Tsung, is in her second year of senior ball.

For Echelli, getting to the B.C.s has been a four-year process.

“I’m so excited for this, I know we seniors are so happy we’ve (qualified). It’s been a long journey but it’s finally come,” she said. “Last year we had a rough go and lost in (the league semis). We expected to make the finals but it proved to be a great wake-up call.”

The past two years has been a process, Chou said, of growing the program. Players have developed a bond off the court that cements their on-court efforts, and even in defeat they rally together.

"We talked about how we manage pressure, because we were definitely very nervous (at the Lower Mainlands) in the past," he said, noting the previous two years saw the team eliminated at the tournament. "This time our leadership came out as we went on. Momentum moves so quickly that the players have to manage those moments themselves."

The Vikings’ starting lineup all play club with the Coquitlam Ducks, making the second-day game against Riverside, which also has a strong Duck contingent, an interesting test.

Chou said his three seniors continue to impress with the maturity they bring to the court.

"I really have to say they take care of what needs to be talked about, all three have very good thoughts about how to work together, what needs to be done. I really like their mentality, how prepared they are."

The left-side hitter feels no matter what happens, the program is going to benefit from reaching this point.

“We need to go there and make a statement,” Echelli said.

“There’ll be butterflies, for sure. Just looking around, being in Penticton and being on that court will be exciting. There’s so much to absorb but we’ll be nervous and ready.”