A chance to ride the pine on the Vancouver Canucks’ bench embarked Burnaby-trained goalie Matt Hewitt on a worldwide adventure to pursue his dream.
Nov 17, 2018 9:04 AM By: Mario Bartel 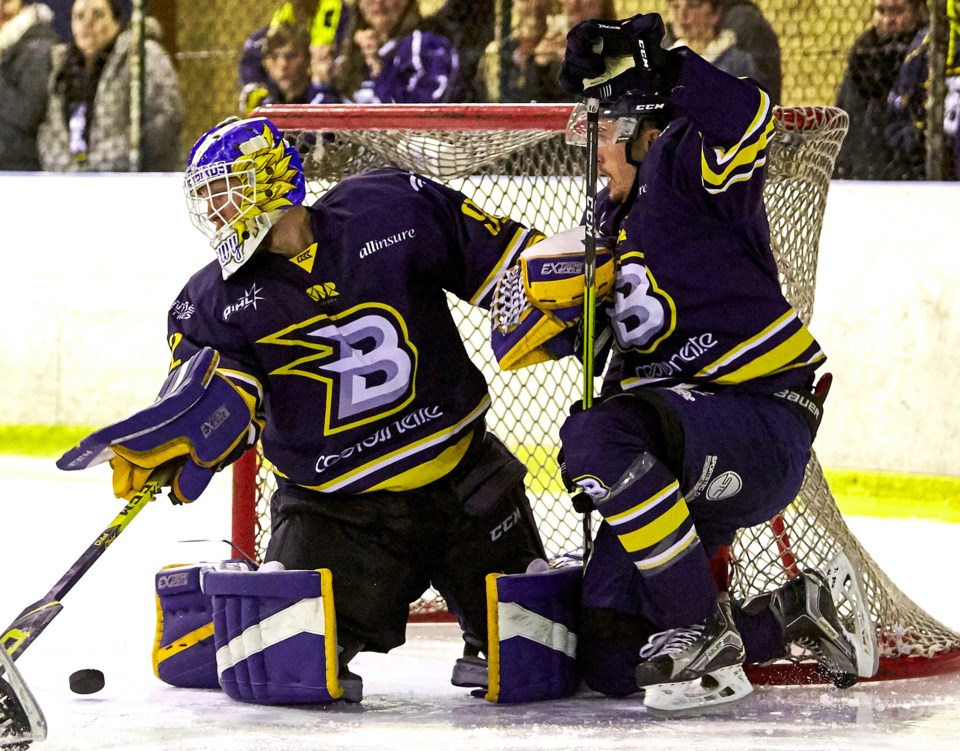 Burnaby North alum Matt Hewitt, shown above guarding the net for the Canberra Brave, is using his hockey talents to see a lot of the world.Paul Furness/AIHL

A chance to ride the pine on the Vancouver Canucks’ bench embarked Burnaby-trained goalie Matt Hewitt on a worldwide adventure to pursue his dream.

He’s won a championship in Australia and last month joined the Fassa Falcons of the Alps Hockey League in Italy.

Hewitt, who grew up in New Westminster and attended the hockey academy at Burnaby North secondary school, was in his fourth season as the goaltender for the University of British Columbia, getting ready for the team’s home opener two years ago when his phone rang.

It was his coach, Sven Butenschon, who informed him the Canucks were in a bind after the NHL team’s starting goalie, Ryan Miller, suffered an injury the morning of their game against the St. Louis Blues and there wasn’t time to fly-in a backup from their affiliate team in Utica, N.Y.

Hewitt was offered the chance to serve as the Canucks’ backup for Jakob Markstrom that night. He signed a one-day amateur contract with the team, hauled his equipment to Rogers Arena and pulled on a Canucks’ jersey to take warmup and then watch the game from the end of the bench.

Hewitt, who’d played three years of junior hockey with the Regina Pats of the Western Hockey League before joining UBC in 2013, said the experience sparked his desire to see where else the sport could take him.

“Getting the call to dress with the Canucks was an experience of a lifetime,” Hewitt said in an email interview from Canazei, Italy, a ski resort town in the Dolomite Mountains. “Moving forward from that experience I wanted to establish myself in other leagues around the world as a pro hockey player.”

After finishing out his playing career at UBC and graduating with a degree in sociology, Hewitt said he reached out to some old teammates who were playing in the Australian Ice Hockey League.

“I thought to myself, I just finished five years grinding at university, I want to do something fun for myself,” Hewitt said.

The Melbourne Mustangs and Canberra Brave showed interest, but when the Mustangs ended up signing another goalie, Hewitt headed for the Australian capital. He said he had no idea what to expect.

“I tried to keep an open mind going into the experience,” Hewitt said, adding he knew it would be different compared to Canada’s hockey culture.

What he found in Australia’s largest inland city in the country’s southeast corner, 280 km from Sydney, was a passionate fan base and an organization committed to winning its first Goodall Cup championship.

“Something told me it was meant to be,” he said.

The eight teams of the semi-pro AIHL begin their season in April and play into September.

In his first game, Hewitt allowed two goals on 31 shots as the Brave defeated the Sydney Bears 4-2.

He said playing in front of a thousand or so hometown fans jammed into the Phillip Swimming and Ice Skating Centre – also known as the Brave Cave – was exhilarating.

“They take it very serious but also have a lot of fun with it,” he said. “They really take it all in and enjoy the atmosphere that hockey has given them.”

The Brave went on to win 24 of their 28 regular season games and finished atop the AIHL standings with 72 points – a new league record – and 18 points ahead of the Bears, who finished second.

Hewitt was also voted the league’s top goalie and the co-winner of his team’s MVP award. He won 23 games and had a league-best goals against average of 1.95.

After defeating Melbourne 5-1 in the league semifinal, the Brave faced Sydney in the final a day later in Melbourne.

Canberra took a 2-0 lead in the first period, then Sydney replied with three of their own in the second period. But a late goal with 5:49 left in the third period by Chris Leveille, another ex-pat Canadian playing for the Brave, sent the game into overtime.

Midway into the first extra period, the Brave’s top scorer, Trevor Gerling, ripped a wrist shot from the top of the face-off circle that eluded the glove of Sydney’s Anthony Kimlin, earning Canberra its cup.

Hewitt said being a part of Canberra’s first hockey championship was a special moment.

“Winning the Goodall Cup with the Brave was a memory of a lifetime that you can’t buy,” he said.

But with Hewitt’s body conditioned to starting a hockey season in September, and his itch to see the world still scratching, he didn’t have much time to celebrate.

Hewitt turned his attention to Europe, but most teams there set their roster by mid-August. A connection with fellow UBC almunus Neil Manning led him to the Fassa Falcons, a team that hasn’t had much success in the Alps Hockey League, a second-tier pro circuit comprised of 17 teams in Italy, Austria and Slovenia.

Those facts along checked off a lot of things for the former Vancouver Northeast Chiefs netminder.

Although he’s looking forward to seeing the continental sights, Hewitt expects to see a lot of rubber with his new club.

“I’m looking forward to helping the team and see what we can do,” he said.

It wasn’t until the Falcons’ 11th game before they finally won, when Hewitt made 29 saves in a 3-2 victory over last place EC KAC. He’s faced a lot of shots – 200 in the five games he’s played since joining the team after some initial visa issues. And his thirst for adventure is being quenched; on Nov. 1, the Falcons’ game against the Wipptal Broncos had to be postponed because of a landslide in the mountains.

But it is all part of the journey – which has taken him halfway across the globe.

“I’m having a blast,” Hewitt said.