Nearly two years younger than the next youngest teammate, midfielder Julia Grosso enters this week’s closed-door matches against Mexico already steeped in the rituals and responsibilities of representing Canada.
May 26, 2016 1:06 PM By: Burnaby Now 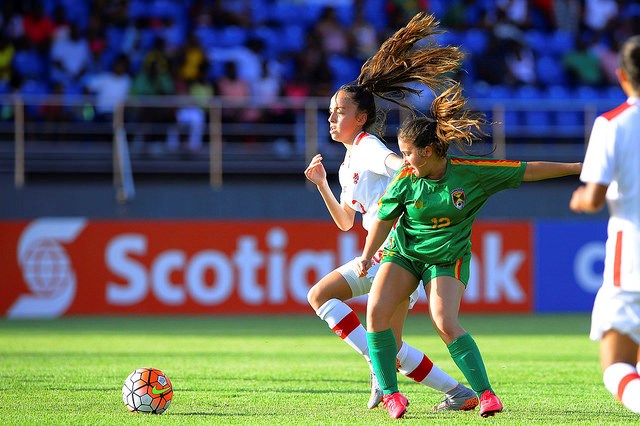 Defender Julia Grosso, 15, who played her youth soccer with Cliff Avenue and Burnaby Girls Soccer, is gaining valuable experience after being added to the Canadian under-20 women's lineup for some exhibition games and a camp in Mexico.Soccer Canada

Nearly two years younger than the next youngest teammate, midfielder Julia Grosso enters this week’s closed-door matches against Mexico already steeped in the rituals and responsibilities of representing Canada.
At 15 going on 16, the former Burnaby Girls, Cliff Avenue and Mountain United soccer clubs product could say she’s been there/done that, but playing for her country never gets old.
“It feels really good being (here),” she said in a phone interview from Mexico City. “The girls, one of them is only one year older and I know some of them. It’s always an honour to play for Canada.”
As a recent addition to the women’s under-20 team, which took on Mexico on May 18 and 23 as part of a 10-day camp to prepare for the FIFA U20 Women’s World Cup in Papau New Guinea in November, Grosso is eager to soak it all in.
From past national team experience, she knows every opportunity is special.
The teen debuted in red-and-white with the Canadian girls U15 squad two years ago, and recalls a magical CONCACAF championship in the Cayman Islands that ended in gold for Canada.
“That first game was so exciting, your adrenalin is flowing so much,” she recalled. “Ever since I was a little girl I imagined walking out and singing the national anthem as a member of the team… To go out and stand there was amazing. I remember seeing my parents (in the stands) and just feeling so excited.”
Earlier this year, she started three of four games for Canada on the backline at the u17 CONCACAF qualifying tournament in Grenada, which saw the team finish third overall to secure a spot at the FIFA 2016 u17 World Cup in Jordan, which kicks off in late September.
Every national invitation and camp tryout was embraced. Grosso participated in the program’s u17 NTC Invitational tournament a year ago and made a strong impression. She credits the many soccer coaches she’s had growing up, and says joining the Whitecaps FC Elite program has been a huge boon for setting the bar higher.
“They’ve really helped develop players, we work in gym sessions and soccer sessions. It’s helped me grow as a player, definitely.”
A Grade 10 student at Van Tech High, Grosso said balancing school and soccer is always a challenge.
“I’ve missed a lot of school due to soccer but the teachers are helpful, they tell me what I need to prepare for and expect me to catch up when I get back.”
The game has always held a firm grip on her interests since she started playing at the age of four.
“I always knew I had a passion for (soccer)… Every step up there’s new information and as you go up the national program there’s new things to learn.”
Her favourite player? Cristiano Ronaldo, because of his creativity and skill. She’s also a big Christine Sinclair fan.
“I’ve always been a huge Ronaldo fan. My dad knows his grandfather, so whenever (his grandfather) visits Ronaldo he brings back something new autographed.”
A member of the national EXCEL program, Grosso’s inclusion with the u20 team is part of an overall long-range plan, head coach Daniel Worthington said.
“We have opened the door for younger players that are not just eligible for Papua New Guinea 2016, but are also eligible for the FIFA U-20 Women’s World Cup France 2018 and because we are spreading it across two programs,” he said. “It’s an opportunity for us to look at new players. With many of the EXCEL players missing due to Olympic development commitments, we have chosen a young team for the two-game series in Mexico City.
“This isn’t the final roster that will be selected for Papua New Guinea 2016, but it will be used as an opportunity to continue the individual development of our NEX players as well as assess some new faces,” he added.
NEX is a national system to develop players over four-to-six year spans, with major tournaments as goalposts. It may not be the official motto, but it has been written – ‘More Sinclair’s more Often.’
The challenge ahead isn’t just about playing well, but also about elevating her game to the benefit of the team. Nothing is taken for granted, she said. Surrey’s Simmrin Dhaliwal, 19, is the other B.C. player on the 21-player roster.
“At the national level the soccer you play the ball moves really fast,” said Grosso. “You battle all the time. You can’t ever give up, because you don’t really have a set situation and you have to come prepared.
“When you have bad days you just have to keep going, keep working.”
So far those bad days are few and far between, because every day she’s playing soccer is a good day.