Byrne Creek bounces back after opening loss with strong effort against Isfeld
Mar 8, 2019 12:11 AM By: Dan Olson 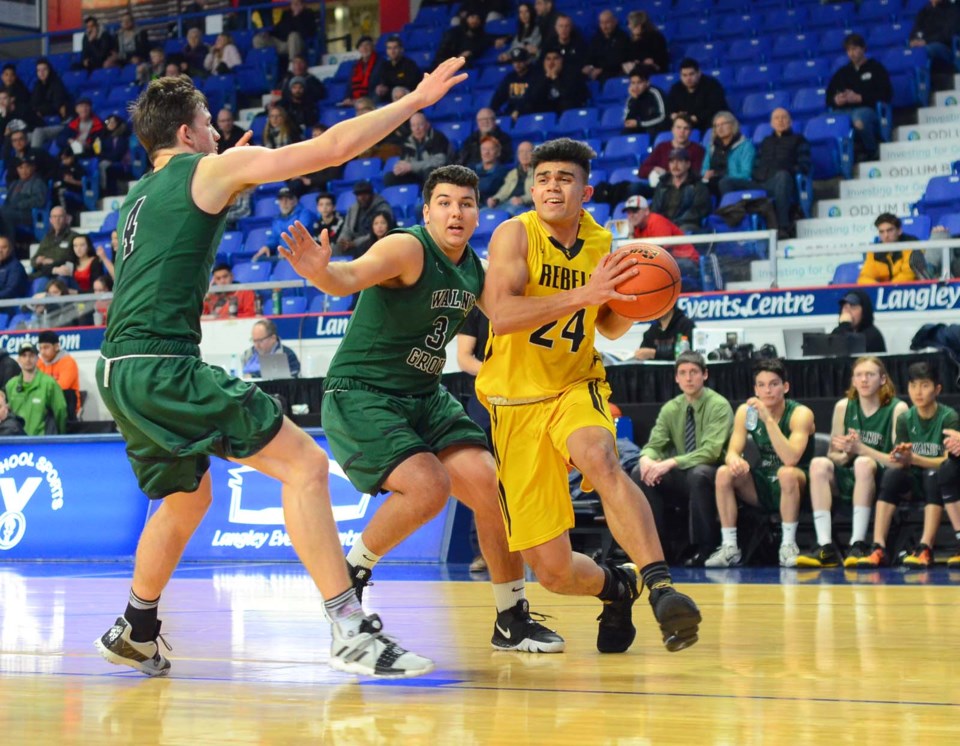 Burnaby South's Jiordano Khan moves the ball towards the hoop during Game 1 of the B.C. 4-A senior boys basketball championships in Langley. The Rebels advanced to Friday's semifinals with a win over Centennial.Cornelia Naylor

Burnaby schools collaborated on a twin-win Day 2 at the B.C. senior boys basketball championships in Langley.

The Burnaby South Rebels continued their win streak in the 4-A championships, advancing to the semifinals on the strength of an 81-60 triumphh over the Centennial Centaurs Thursday.

Powered by a big game from six-foot-10 centre Sasha Vujisic, the No. 5-seeded Rebels held off a amped-up Centennial team and over the middle frames expanded a close game into something more comfortable. Although Burnaby South led by just four after 10 minutes -- and trailed briefly in the game's early goings -- they gathered some breathing room with an 18-10 run in the second quarter to lead by 12 at halftime.

While the 13th-seeded Coquitlam crew trailed by 11 with 10 minutes to play, the defending 4-A provincial champions finished in a big way, putting up 30 points to garner more momentum for Friday's semifinal.

A forceful presence inside the paint was a major asset in the win, as the Rebels out-rebounded Centennial 45-25. As the game wore on, Burnaby South's sharpshooters got hotter. Already successful on 17-of-39 field goal attempts in the first half, the squad increased that over the final 20 minutes, draining 20-of-41 from inside the arc.

The team received its second scare of the tourney, however, when Vujisic was felled in the fourth quarter and left the game, but not before posting a team-high 20 points, 15 rebounds and three blocks. Contributing 16 points and six rebounds was Grade 10 guard Justin Sunga, while Baltej Sohal supplied 13 points, seven assists and seven boards.

In the team's opening game, a 114-84 win over Walnut Grove, Grade 12 post Aidan Wilson hit the floor after getting tangled with a teammate and sat out the final 34 minutes. Wilson returned to play against the Centaurs, contributing nine points and four rebounds in limited playing time.

Burnaby South now meets No. 9 seed Lord Tweedsmuir in the first semifinal Friday, 7 p.m. at the Langley Events Centre. The Surrey school added another upset win to the event when it stopped provincial No. 1-ranked Holy Cross 79-69 in its quarterfinal match.

Joining Holy Cross among the surprised fallen are No. 2 Kitsilano and No. 4 Vancouver College, who were both upset on opening day.

The 4-A championship final is slated for Saturday, 8:15 p.m.

A team with as much heart and desire as Byrne Creek has, there was no question that they'd come out hard on Day 2 of the 3-A B.C. boys basketball championships in Langley.

If they were still nursing the wound from Day 1's disappointing 74-48 loss at the hands of the North Delta Huskies, they didn't let it show once the whistle blew.

The Bulldogs put up their first win of the tourney, beating Mark Isfeld 81-67 on Thursday as part of the consolation bracket.

Although they trailed briefly in the opening minutes, the Burnaby squad held the rest of the way and were ahead 40-31 at halftime. Putting up a respectable 33.3 per cent on field goal attempts in the first half, Byrne Creek found another range in the second half with a searing 48.4 per cent, going 15-for-31.

A minor consolation in itself was the fact that North Delta showed more of the stuff that knocked the Bulldogs out of the winning bracket, bouncing No. 1-ranked Sir Charles Tupper 74-67 to advance to the semifinals.