A journey to Vancouver Island resulted in a reaffirming and satisfying victory Saturday for the EDC Burnaby under-21 men’s soccer team.
Apr 26, 2018 6:00 PM By: Dan Olson 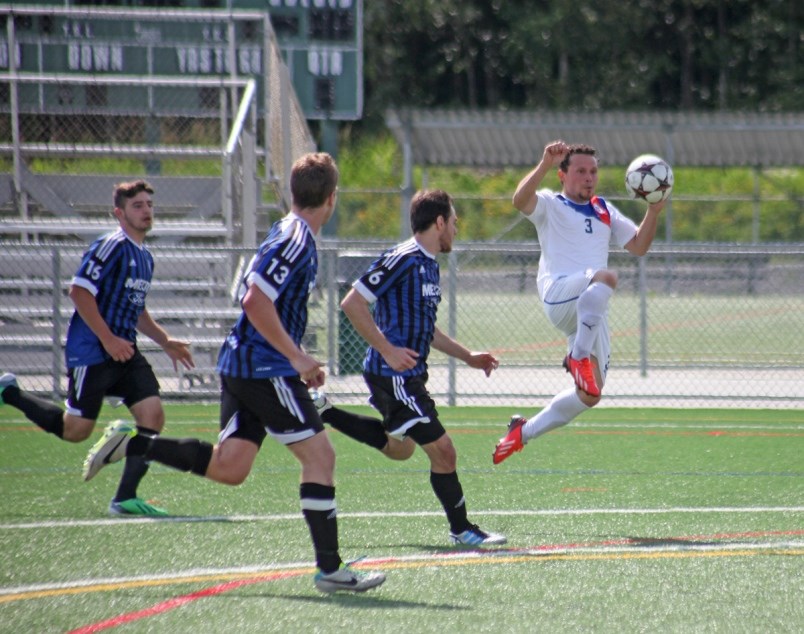 The EDC Burnaby under-21 men's team advanced to the provincial cup quarterfinals by beating Cowichan United 2-0 last week. This Sunday they head to Abbotsford to play the Storm, with a berth to the semifinals on the line.NOW file

A journey to Vancouver Island resulted in a reaffirming and satisfying victory Saturday for the EDC Burnaby under-21 men’s soccer team.

Launching the provincial cup championships with a game against Cowichan United, the Burnaby squad struck first and then hung on for a 2-0 win to advance to this weekend’s quarterfinals.

Jarnail Parmar’s header, off a corner kick 20 minutes into the contest, gave EDC an early lead that doubled on Farshad Aghai’s sure shot before the half.

Going in, they knew nothing about the opponent, but head coach Gilbert Kyne knew at halftime Cowichan was going to ramp it up with a two-goal hole to erase.

“They came out pressing, pressing hard,” said Kyne. “We had a couple of players on yellow cards and we couldn’t afford to lose anyone. We had no subs.

“We had to be careful, but I just told them to get to their man, don’t try to do too much.”

If not for netminder Anthony Matkovic, he conceded, it could very well have gone to penalty kicks.

“(Matkovic) had a very good game – he actually saved us,” said Kyne. “We didn’t have our best performance of the year but we were able to take advantage early and got some great goalkeeping.”

Burnaby made the trip with just 15 players, including two netminders, due to a combination of university and work commitments and injuries.

Parmar is one of the team’s five 18-year-olds who have stepped into the u-21 Vancouver Metro League and looked comfortable doing it.

“They  are a very skilled bunch, the whole team,” said assistant coach Claudio Ramirez. “They all come from the high-performance side, and the young guys bring that youthful enthusiasm. I’m honestly surprised at how confident they were to start the year.”

Burnaby’s next opponent, the Abbotsford Storm, enjoyed a bye into the quarterfinals after winning the Fraser Valley’s u21 league title with a 14-3-3 record.

“We don’t know what they are like, either,” said Kyne. “We’re just going to do our thing, which is train hard and come prepared.”

Although the team is extremely young, EDC entered the season with a new coach, just six 1997-born players, and full confidence that they could weather any storm.

A few other Burnaby teams are pressing forward into the provincials, with an eye at making the May 12 and 13 finals, hosted at Burnaby Lake West and Swangard Stadium.

In other provincial cup play, EDC FC men’s team of the Vancouver Metro League in Masters A division will square off against UVic Alumni on Saturday, 1:30 p.m. at Burnaby Lake West, while in Masters B action, the Burnaby Soccer League’s Wanderers FC and Europa FC advanced to the quarterfinals. The Wanderers bested Prospect Lake 4-1, and now face Vic West, Sunday at 3:30 p.m. at Burnaby Lake West. Europa blanked the Richmond Old Blacks 3-0 and head to Victoria to play Cordova Bay on Saturday.