Beginning Aug. 3 when the Canadian women face Australia in soccer at the Sao Paulo Corrinthea Arena, the world’s sporting focus will be on Brazil.
Jul 28, 2016 2:59 PM By: Burnaby Now 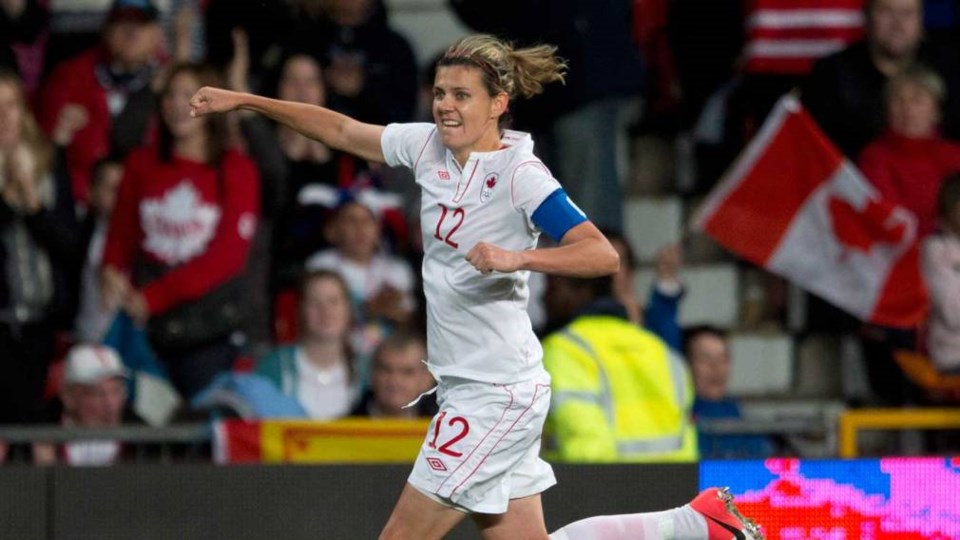 Burnaby’s Christine Sinclair will be looking to get Canada back into a medal game as the 2016 Rio Olympics kick off Aug. 3, when the Canadian women’s soccer team plays Australia. The official opening ceremony for the Summer Games goes Aug. 5.Courtesy COC

Beginning Aug. 3 when the Canadian women face Australia in soccer at the Sao Paulo Corrinthea Arena, the world’s sporting focus will be on Brazil.
Passions will be raised and hopes will be enflamed to begin the 2016 Rio Olympics, and Canada’s team will be there in full force.
The 2016 Canadian Olympic team was officially announced this week, featuring 313 athletes from across the country.
Among the long list of accomplished Canadians are eight athletes with strong ties to Burnaby, in a variety of sports.
Christine Sinclair’s accomplishments for Canada soccer are well-known, and she has played a huge role in the nation’s emergence among women’s soccer powers since debuting with the senior team in 2000 as a 16 year old.
Sinclair, 33, will captain the Canadian women’s squad with an eye towards the gold medal game on Aug. 19. With 160 goals in international competition, Sinclair sits second among women in all-time scoring.
The 2013 Lou Marsh Award winner led all scorers at the 2012 Olympics – scoring three times in a dramatic comeback attempt in the semifinal.
Canada is slotted in a pool with Australia, Germany and Zimbabwe.
Brendan Hodge left the sport of rowing after the 2005 World under-23 championships to pursue a law degree. Watching the Canadian rowers in London four years ago rekindled the spark for the Burnaby Lake Rowing Club member, who will make his Olympic debut at the age of 31 in the men’s lightweight 4 event.
Since restarting his competitive rowing career, Hodge placed fourth at the 2013 World championships in lightweight pairs and was on the men’s 4-boat for Canada’s gold medal at the 2015 Pan Am Games.
Women’s 8 rower Lauren Wilkinson stood on the podium with her teammates four years ago and wore silver, and will be competing to better that this time in Rio.
The Burnaby Lake Rowing Club athlete, the daughter of former national team rowers, since then has picked up silver medals at both the 2014 and 2015 World championships.
The 26 year old first competed for Canada in 2006 at the junior Worlds, then went on to a four year career at Princeton, where she was a member of an NCAA championship.
The rowers hit the water from Aug. 6 to 13.
Burnaby’s Gabriel Ho-Garcia has become a fixture on the Canadian men’s field hockey pitch. At just 23, Ho-Garcia has racked up an incredible 75 caps for the red-and-white, including as a member of the 2015 Pan Am finalists. In that tournament, the midfielder counted a team-high five goals as Canada finished second overall.
He was also a member of the Canadian 2012 Pan Am junior team that placed second.
For Iain Smythe, the Rio Olympics is the crowning moment in a career which has seen the forward play 115 games at the senior level for Canada. The 31 year old debuted internationally in 2009, appearing in two Commonwealth Games, as well as a member of the 2011 and 2015 Pan Am Games, achieving silver at both.
The Canadians open against Germany on Aug. 6, aiming to advance to the Aug. 18 final.
Nayo Raincock-Ekunwe spent four years up on Burnaby Mountain as a member of the Simon Fraser University women’s basketball team. It served as an excellent learning ground for her next challenge. The 24 year old guard heads to Rio having experienced dramatic international success as a member of Canada’s 2015 gold medal winning teams at both the Pan Am Games and FIBA Americas championshipos.
Currently playing pro in Australia, Raincock-Ekunwe has been in the national development stream since 2011.
The Canadians top off against China on Aug. 6, with other preliminary games against Serbia, Senegal, the U.S. (Aug. 12) and Spain. Medals will be awarded on Aug. 20.
Haislan Garcia, 33, is competing in his third Olympic Games. The Burnaby Mountain Wrestling Club alum advanced to the quarterfinals in London in 2012, and scored bronze last year at the Pan Am Games in Toronto in the 65-kilogram division.
The Cuban-born grabbler made his Olympic debut in Beijing. This time around, he qualified in May by beating Romania’s George Bucor.
Another SFU alumna will put her all on the mat in Rio, aiming to climb the women’s 63kg division. Burnaby’s Danielle Lappage, 25, overcame a torn ACL to win gold at the Rio test event earlier this year and at the Grand Prix in May.
Originally from Alberta, the Burnaby Mountain Wrestling Club member connected for first at the 2013 Juex de la Francophonie, Commonwealth Games gold in 2014 and an eighth-place showing at the worlds.
The wrestling competitions begin Aug. 14 and continue until the Games’ closing day on Aug. 21.