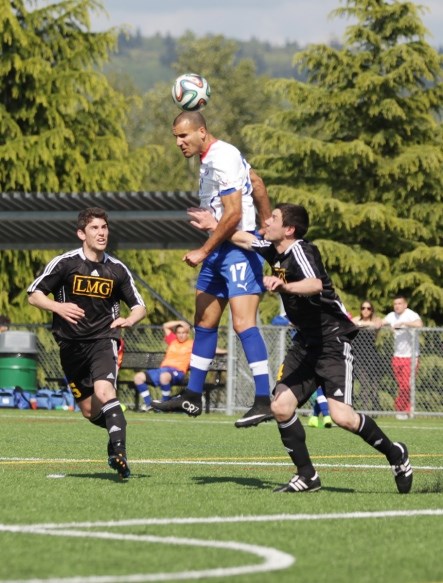 A strong showing in the Masters A semifinal has earned the EDC Burnaby soccer team a shot this weekend at a Keith Millar Provincial Cup title.NOW file

EDC Burnaby Over-35 premier men’s soccer team will have one more game as underdogs.

“Nobody gave us much credit to start the year,” remarked coach Rodrigo Alvarado. “This is our first year (in the Over-35 premier division), so we didn’t know exactly what to expect.

“Getting to the finals is incredible.”

The semifinal lived up to that, a 1-0 penalty-kick decision that saw Burnaby weather an impressive storm. Coquitlam, which features former Whitecaps Alfredo Valente, Oliver Heald and 2018 Golden Boot champion Tiarnan King, layered on the offence but could not put one past EDC’s Hugo Vasquez. Into penalty kicks, Vasquez stopped Metro-Ford’s second shot, and that was the only non-goal of the series.

The Burnaby side also had to play a good portion of the second half a man down following a red card to one of their backs. They emerged battle-scarred yet victorious, and with a berth to this weekend’s Masters A Cup provincial final.

“(Vasquez) came up huge for us,” said Alvarado. “The guys this game all came together. There was no arguing. Everyone knew what was on the line and they worked together.”

In their first year at the Masters A level, EDC now can frame the whole season with a win Saturday (5 p.m.) at Burnaby Lake.

In their Over-35 premier league encounters, EDC fell to Westside by 2-1 and 5-0 scores. But in their most recent meeting (March 16) in the O35 Cup semifinal, Burnaby eked out a 1-0 decision en route to a league playoff title last month.

“Westside has won a lot of these (provincial finals), but maybe the one thing in our advantage is we are a little younger. They’ve got a lot of veterans, and we have to go at them,” said Alvarado.

In other provincial cup play, the cup won’t run over for the Burnaby Metro League’s Impero Calcio.

Impero saw their hopes of playing in the Keith Millar Open B men’s provincial final with last week’s 4-2 loss to Coquitlam Metro-Ford Lupi.

Facing a team with just one loss on the year and two titles already to their name, the Burnaby squad delivered a gritty underdog effort that at times stymied their higher-ranked Vancouver Metro rival. While Lupi have the ‘brand’ coming from the vaunted Vancouver Metro circuit and were winners of the Div. 2A title and Div. 2 Cup in recent months, Impero entered with its share of hardware, too. Their recent bragging points included the Rudolph and Burnaby League cups.

Coquitlam never trailed, but Impero tied it 1-1 and were within a goal for a good portion of the second half, until the last play of the game resulted in the final goal.