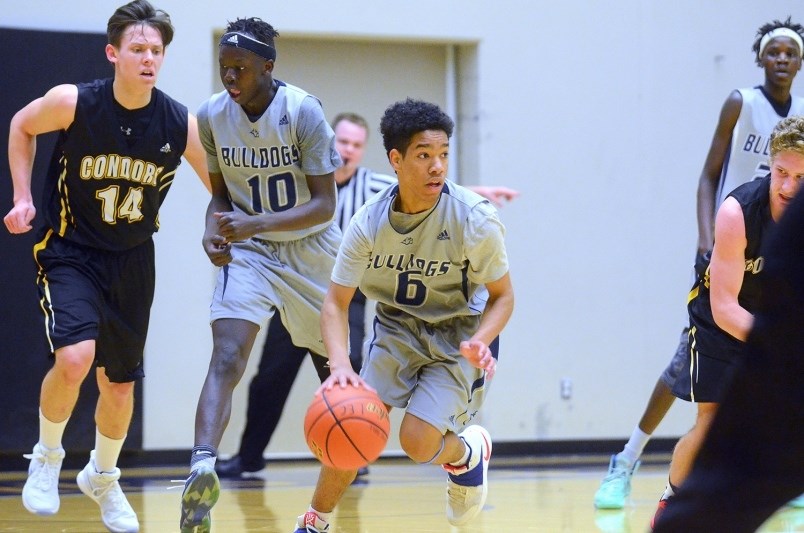 Grade 12 guard Sufi Ahmed, shown above last year, was one of the strong leadership core that helped guide the Byrne Creek Bulldogs to three straight B.C. 3-A senior boys championship tournaments, including a pair of Final Four berths. They wrapped up this year's provincials 10th overall.NOW file

On the final day of the provincial championship, when energy is waning, aches and pains are barking and emotions are strained, good and great efforts can be separated by the thinnest of margins.

The Byrne Creek Bulldogs gave a very good effort for most of Saturday's ninth-10th place battle of the B.C. 3-A senior boys basketball championship, but were unable to overcome a determined G.P. Vanier squad in a 74-65 defeat at the Langley Events Centre.

In a crunch-time of games that saw the Bulldogs knocked from the championship bracket on Day 1 in a 74-48 loss to eventual 2019 B.C. winner North Delta, the Burnaby squad did a terrific job of refocusing and re-uniting to keep the dream alive. They defeated both Mark Isfeld and Steveston-London in convincing fashion to get to the ninth-place game. But the final win proved elusive.

Although they only held the lead for 5:32, beginning when Grade 10 guard Mukhtar Afadish sank his first three-pointer with just 16 seconds left in the first quarter, Byrne Creek showed character and grit in turning an 18-point deficit into a single-digit hole on two separate occasions.

But an 11-0 run, which flowed into the fourth quarter, gave the Vancouver Island No. 1 squad a comfortable margin in which to play with over the final nine minutes. Another contributing factor, in both lining up the Towhees for some doable shooting practice, while also dampening any momentum that the Bulldogs could put together, was a heavy load of fouls assessed to the Lower Mainland No. 3 team.

Vanier went 10-for-20 from the penalty stripe, including hitting bonus territory late in two separate quarters.

It can be a tough game to approach -- the participation ribbons of placing 10th long lost their lustre. However, school pride as well as playing for each other, still ensured that the Bulldogs were game.

“We came out slow and sloppy. The second half we picked it up but it was kind of late," remarked Grade 12 guard Bithow Wan following the last game. “I could have asked for a better ending, but it means a lot. … This team, we’re all close, we’re all brothers, I’m excited to watch the young guys for next year, they’re going to be good."

Wan put up a game-high 24 points, half of it in the fourth quarter, and added seven rebounds and five steals, while fellow graduating guard Sufi Ahmed netted 11 points.

Chipping in with eight apiece were Chidubem Nkoloagu, Adam Muhammad and Afadish.

“I just knew it was my last game, Sufi’s last game and all the seniors. I just wanted to go out and have fun and play ball," Wan added.

It was a contrast to the previous two games, where the Bulldogs controlled the tempo for nearly the full 40 minutes en route to a pair of victories.

Against Steveston-London, Byrne Creek never trailed and actually led for all but the first seven seconds of the match. Ahmed cashed in 23 points, while Nkoloagu posted 16 points and nine boards. Wan also contributed 14 points and seven rebounds, while Grade 9 guard Bobby Mabeny chipped in 12 points.

In the team's first win of the tourney, it was a similar story. Isfeld held the advantage for just 51 seconds, while the Burnaby squad led for more than 37 minutes. Ahmed tallied a team-high 23 points and eight rebounds, with Afadish adding 19 points.