Starting from scratch, the Byrne Creek Community School’s rugby program has a lot of the ingredients necessary for success.
Mar 5, 2019 1:24 PM By: Dan Olson 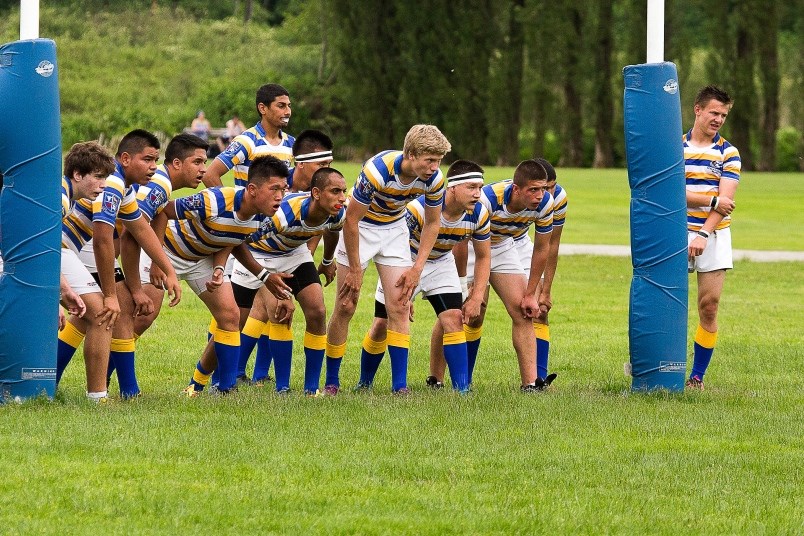 Rugby is getting a relaunch at Byrne Creek after an absence of three years. The senior boys program hopes to emulate the Cariboo Hill boys team, shown above in 2015, that won the league banner.Richard Duncan

Starting from scratch, the Byrne Creek Community School’s rugby program has a lot of the ingredients necessary for success.

With approximately 80 students signed up, a dedicated instructor, support within the school as well as businesses donating to help cover some of the startup costs, a lot of the boxes have been checked as the 2-A senior boys season approaches.

Add the international rugby community to that list, with Wednesday’s (March 6) appearance by the Kenya Sevens men’s team at a team practice. The Kenyans, in Vancouver for the weekend’s HSBC Rugby Sevens tournament at BC Place, will drop by to help provide a boost to the local team.

It’s just another step in the building of a program, coach Moreno Stefanon said. With the start of the season just around the corner, the timing couldn’t have been better.

“I phoned (Rugby Sevens organizers) up and asked if it was possible to get a team to come out to Byrne Creek. …. The guys were so ecstatic with what we did last year at West Vancouver with 138 kids out (with the South African team), so they said ‘For sure Moreno, let’s make it happen,’” remarked Stefanon, who is back teaching in his hometown after a stint on the North Shore.

Joining the Byrne Creek players will be students from the nearby Edmonds and Stride Avenue community schools, making it a packed field listening and observing the pros give a demonstration.

Coming into this season, the Bulldogs had no program to rebuild from. But where there is a will, there’s a way.

“There wasn’t really any rugby here for a while,” noted Stefanon, a Burnaby North alum. “Byrne Creek three years or so back tried to run a Grade 8 team, and a year before they did run a Grade 8 team that actually won (league) banner back then. But there has been no rugby since.”

The sport however, is well-suited for a pop-up style restart. Equipment is minimal compared to most sports, and a venue involves the Great Outdoors – including under some inclement weather. Last month’s snow, however, did throw training indoors, but a hearty core of 40 kept it up, and Stefanon expects a surge in attendance both with better weather and the coming end to the basketball season.

It’s not the first high school rugby program that Stefanon has helped scrum together. After graduating, he kept involved and coached the Vikings for a handful of years. Then four years ago, as a practicum teacher at Cariboo Hill, he launched the senior boys program that went on to win a league banner.

“It’s such a perfect fit for Byrne Creek, the community and the type of kids that are here. To have the sport and the structure that rugby provides, the values that rugby instills around respect, teamwork and camaraderie, and all these things. It’s exactly what the community needs,” he said.

He’s taken on the role of Lower Mainland zone rep and a commissioner, putting in the time to help Byrne Creek get a foothold in the tough 2-A Tier 1 circuit. As the lone Burnaby school in the league, they line up against the likes of Sir Charles Tupper, Rockridge, Seycove, Sutherland and defending B.C. champion Collingwood. Each of those are well-established programs that bring experience to the field.

But with an aim of making incremental improvements each game out, Byrne Creek’s players can garner confidence as well as a strong bond in building something together, he noted.

“It is really what rugby is all about. It’s inclusion. There’s a space for everybody – whether you are a big student, a smaller student, a tall student – there’s a spot for everybody on the rugby field. That’s the importance of rugby. We don’t turn anybody away, there are no tryouts. We are just trying to build community.”

Byrne Creek plays its first exhibition test on Thursday, 4 p.m. against McNair of Richmond, at the Burnaby Lake Rugby Club. Next week (March 12), Collingwood pays a visit. They also have a scheduled match against D.W. Poppy on April 5 at Swangard Stadium.

“It will be a real test. We definitely have the athletic body; they just need to be like sponges and want to learn. If they do that we will make a lot of noise in the league I think,” said Stefanon.