Canada Soccer has named the 23 players who will make up Canada Soccer’s Women’s National Team roster for the April 5 international friendly against England in Manchester, England.
Apr 1, 2019 4:56 PM By: Burnaby Now 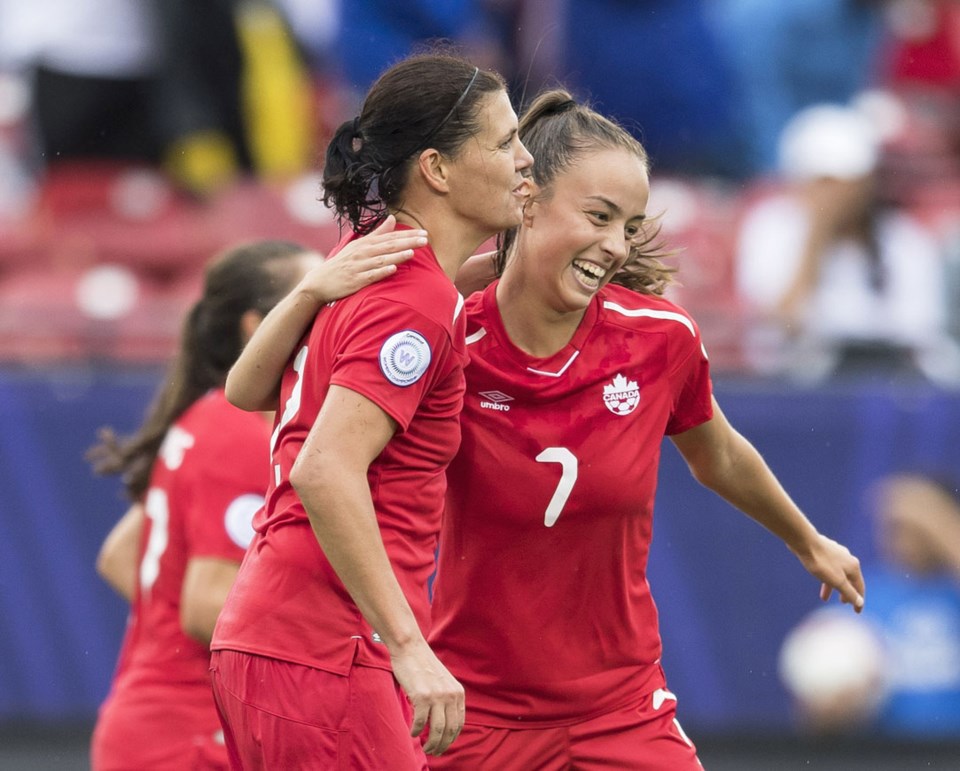 Burnaby's Christine Sinclair, left, and Burnaby-trained Julia Grosso celebrate a goal in recent international action. The two are part of Canada's lineup for this week's friendly against England in Manchester.MEXsport CWNT

Canada Soccer has named the 23 players who will make up Canada Soccer’s Women’s National Team roster for the April 5 international friendly against England in Manchester, England.

The Tier 1 match will feature two of the world’s top teams with Canada currently fifth in the FIFA Women’s world ranking and England one spot ahead in the fourth position.

It’s been nearly four years since England and Canada met in the quarterfinal of the 2015 FIFA Women’s World Cup, with Canada looking to turn the sour memory of a 2-1 loss as motivation in preparation for this year’s World Cup.

Canada is led by Burnaby’s Christine Sinclair, who is poised to play in her 279 game for the national women’s senior team. The Burnaby South alumna sits five goals back of international all-time goal scorer Abby Wambach, with 179 tallies for Canada.

The Canadian roster also includes Vancouver Whitecaps Girls Elite REX products Jordyn Huitema, of Chilliwack, and Jade Riviere, a Markham, Ont. native, both 17 and who attend Burnaby Central Secondary as part of the REX program, and Julia Grosso, a Vancouver native and alumna of both the Burnaby Girls’ and Cliff Avenue soccer clubs.

“We know England is a very good opponent and they will want to put on their best performance at home, so this is an ideal moment to test what we have been working on as we prepare for France,” said Canadian women’s head coach Kenneth Heiner-Moller.  “We remain focused on improving ourselves, our processes and tactics, to peak in June, but we know heading into England that this match will be the kind of competition we should be preparing for.”