A bit of positive fortune-telling can't do no harm during these lonely, sequestered days. It may seem like almost a year ago, but the Burnaby South Rebels are barely three weeks past their B.C. 4-A senior boys basketball title.
Apr 1, 2020 1:40 PM By: Dan Olson 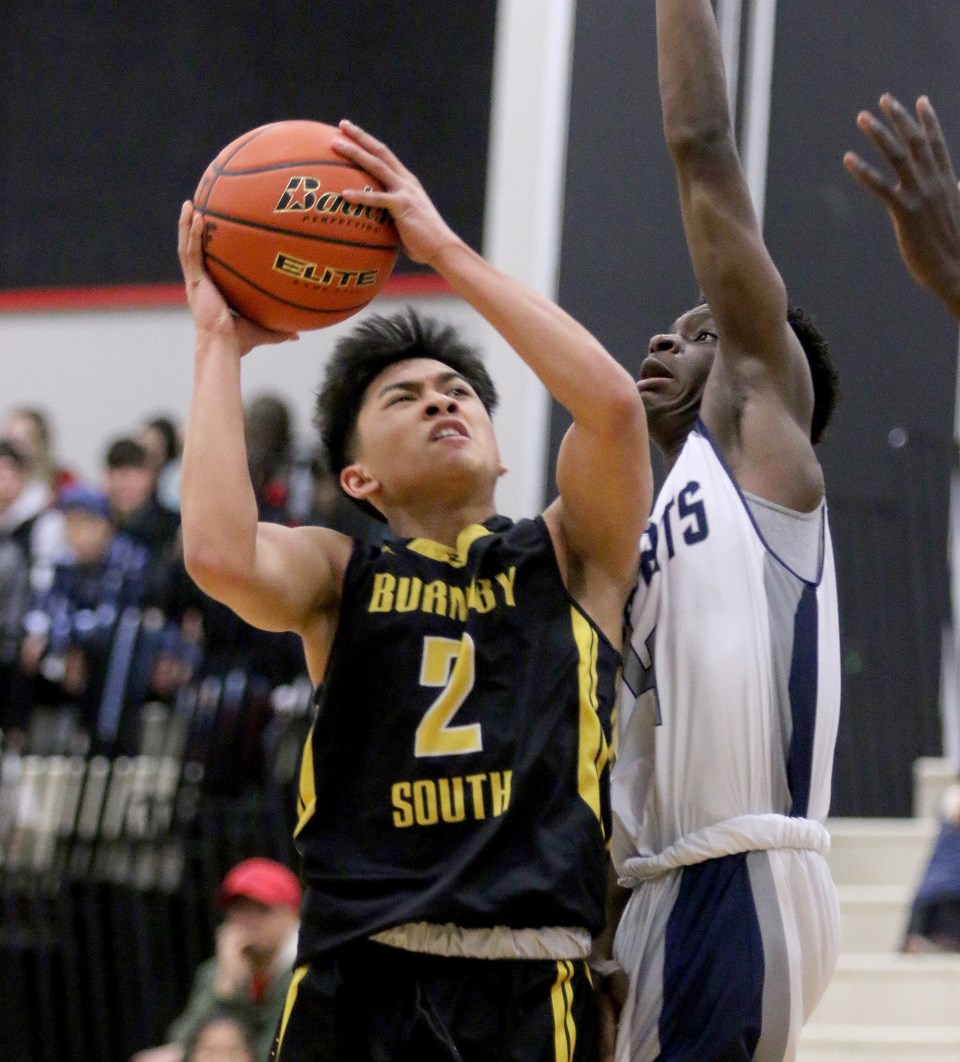 Provincial 4-A basketball's MVP, Burnaby South point guard Justin Sunga is one big reason why the team is ranked No. 1 in a pre-season poll.Mario Bartel/TriCity News

A bit of positive fortune-telling can't do no harm during these lonely, sequestered days.

It may seem like almost a year ago, but the Burnaby South Rebels are barely three weeks past their B.C. 4-A senior boys basketball title. Offering a respite from the daily news and realities of a world in COVID-19 isolation comes the pre-season 2020-21 rankings courtesy of Howard Tsumura of varsityletters.ca.

To no surprise, the current champions sit atop the list, with a deep returning roster fit to make it three championships in four years.

“It’s nice to receive the recognition, for all the work the kids put in and what the coaches are doing, but at the end of the day you want the recognition in March (at the championship),” remarked Burnaby South head coach Mike Bell.

“We don’t take anything for granted, because the games have to be played out.”

The reigning Rebels, who defeated the Kelowna Owls 70-58 just four weeks ago in the title game at the Langley Events Centre, will be losing a trio of starters in Emir Krupic, Matthew Pineda and Sasha Vujisic.

The six-foot-10 Vujisic was a first team all-star, while Krupic was the championship final’s Quinn Keast Foundation Player of the Game.

All three were instrumental contributors, but they were also unavailable during the first month of last season, due to injuries and a B.C. School Sports suspension. So in a way, next season’s Burnaby South lineup has already been road tested.

“We played virtually all of December without Matthew, Sasha or Emir,” said Bell. “We only lost one game, by one point to Kelowna (in the Tsumura Invitational final on Dec. 6) during that time. For all intense purposes, that’s mostly what our team will be.”

During the first six weeks of the season, the Rebels were 15-1, with Pineda and Vuljisic sidelined with injuries. Krupic completed his one-year suspension – for having played an allotted number of games with a Seattle prep program the year previous – after the calendar changed to 2020.

The core of the championship team will start with guards Justin Sunga and Jareb Pineda, who demonstrated worldly leadership abilities while setting the on-court tone. Sunga, in his second senior season as a Grade 11, continued to dominate on both sides of the ball against the best competition in the province.

“Justin was very capable at doing it all. He set the tone on defence, and leading our attack. (Being) defensively strong is what we preach and what we expect.”

Sunga averaged 15.5 points per game at the provincials, while chalking up a lot of steals, assists and rebounds.

Pineda, meanwhile, made the jump to the senior level after earning the 2019 B.C. junior championship MVP award a year ago, and was pressed into shadowing some of the most dynamic players in the province.

“(Pineda) probably didn’t get enough recognition from others that he deserved,” said Bell. “He handled every other teams top players during the playoffs and provincials and contained them. (Grade 10 Jimmy Zaborniak) stepped up and was asked to sub-in for (Pineda) and did a good job, too.”

Karan Aujla, at six-foot-seven, continued to develop as a primary post, stepping out of Vujisic’s shadow to be a consistent contributor on boards and scoring.

Players who held supporting roles this season, like Anthony Palomino-Acevedo, Conlin Duong and Eric Li, will be tasked with bigger opportunities for the coming season.

Adding to the depth of the team will be a number of junior grads, led by standout guard Zach Chan. The jr. Rebels placed seventh in B.C., after winning it all in 2019. This year’s Grade 9 team, meanwhile, finished third at their provincials.

While the focus from outside is on the senior program, Bell notes that Burnaby South’s overall strength is depth at all levels, and the connectivity that all the teams share.

“We’re going to have tonnes of guards. We’ll still play a lot of the stuff we did, but we just won’t have two bigs like we did this year,” the coach noted. “We’ll be undersized and have to find a way to win by out-working the other teams.

“The rankings are nice but we know every team is going to come at us.”