Close battles give Bulldogs something to chew on 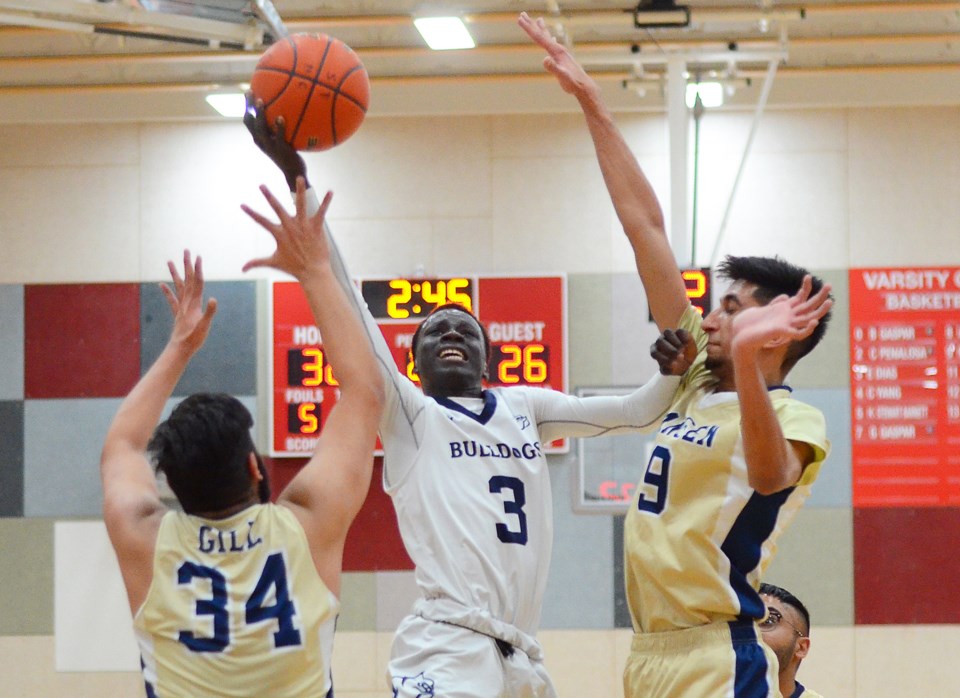 Although they failed to draw into the fourth-and-final day, the squad’s three games and 1-2 record included a veritable rainbow of good examples and moral victories to soothe the feelings after two straight losses.

“(The players) understand that we learned a lot and we competed against some very good teams,” noted Byrne Creek coach Bal Dhillon. “There were some silver linings or moral victories in (the two losses), and when you look at it, it’s never terrible to lose in January.”

While wins are always preferred, Dhillon said having faced such rivals as No. 1-ranked G.W. Graham and fellow honourable mention Brookswood under the heat lamp that was the strong 3-A collection of squads, was about tests.

Displaying a lot of great character in taking a lead near the midpoint against Graham, and spending much of the Brookswood game in the driver’s seat, highlighted the Bulldogs strong athleticism. Dhillon said the main flaw in the loss to the Bobcats was by the coach himself.

“We obviously wanted a better result. (Brookswood’s Mason Berekoff) kind of changed the game. We did a good job zeroing in him, holding him to nine in the first three quarters and then he goes off and scores 13 in the fourth,” said Dhillon. “We held a fairly steady eight, nine point lead and the coach made a boneheaded decision and it cost us the game.”

He said a defensive change late in the third quarter opened up an avenue for the Langley squad, and Berekoff played like someone who wouldn’t be denied.

“He did that to (Sir Charles) Tupper the day before. You’ve got to tip your hat to someone who can do that.”

Mabeny, one of the team’s trio of Grade 10s, racked up a game-high 27 points in the loss, while teammates Mukhtar Afadish and Adam Muhammad tallied 13 apiece.

A day earlier, it was the Grizzlies who put on a strong fourth quarter show to turn a six-point game into an 18-point margin in a 91-73 Bulldogs loss.

“We went into the locker room (at halftime) feeling good about where we were,” Dhillon said, noting the Burnaby squad actually held a brief advantage in the first frame. “We played them close starting the (fourth) before they went off – they made it an 18-point lead pretty quick.”

In that tilt, the team was tasked with trying to shut down multiple Graham weapons, with Grade 11 forward Alex Flores given the difficult challenge of matching up against not one but two six-foot-10 posts, Grizzlies’ twins Zach and Matthias Klim, who both made the Chancellor all-star team.

“That was Alex’s best game by far. He was really battling hard,” said Dhillon.

They opened the tourney by handily stopping Rick Hansen 93-65, before locking horns with the Grizzlies, who would end up falling 108-88 to No. 2-ranked Duchess Park in Saturday’s final.

The next test for Byrne Creek is a league match against Burnaby Central tonight (Monday, 7 p.m. at Byrne), followed by a game Wednesday at Alpha (7 p.m.). The Bulldogs are playing catch-up on the league action, as they sit 1-0 and hold a couple games in hand on undefeated Burnaby South and 2-1 rivals Burnaby North and Moscrop.

This coming weekend they head to Richmond for the Bob Carkner Steveston-London tourney, tipping off against Windermere on Thursday. A win on opening day could see them face 2-A No. 6-ranked Hugh Boyd.