Currie still playing for 'the fun of it' 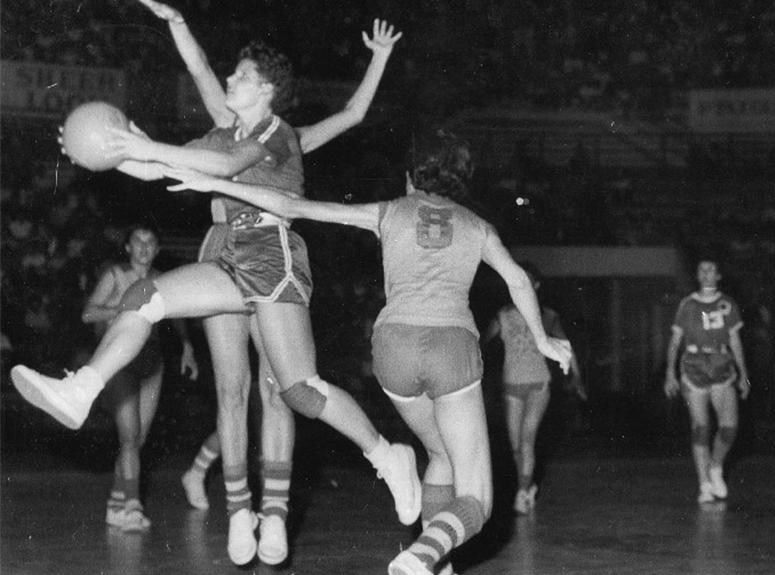 It’s going to be a special honour and a great chance to reminisce and see some old friends.

New Westminster’s Darlene Currie is going to soak it up as she joins an elite group of athletes and honourees at the B.C. Sports Hall of Fame induction ceremony on Thursday.

Just don’t call her a former

The 81-year-old Currie can talk about the old days, when she was on the Canadian women’s national basketball team that competed at three Pan-American Games, beginning in 1959, as well as her B.C. teams that won three national senior titles during the ’60s.

She can also talk about her preparation for this summer’s U.S. national masters championships, where Currie is joining a friend from San Diego with their team in the over-80 division.

“When you get to that age you take anyone who’s crazy enough to come out and play,” said Currie. “The last time I played was at the masters championships on the over-75 team, and we won (the U.S. title) back in 2013.”

It’s something she’s looking forward to, for all the same reasons she likes reflecting on her past accomplishments.

“It’s kind of neat that something you did a long time ago is being remembered,” she said. “It was a lot of fun, too.”

Currie, originally from Alberta, was a vital member of those early Pan Am teams, helping organize and later coaching. Canada would win a bronze medal at the ’67 Games in Winnipeg with teams that came together late in the four-year cycle to cobble together the best on-floor chemistry they could.

“Canada was never a powerhouse. We were untested because we didn’t play together unless it was the Pan Am Games, just because of proximity,” she recalled. “For other countries, it was a lot easier – Spain couple play France because they were a couple hours away. The States weren’t a power in the early days, either.

“We had good players but we didn’t have the competition opportunities or the numbers to select from.”

Still, the Canadians continuously punched above their weight class and carved out an international reputation.

Her transition from player to national team coach was just a natural progression, Currie said.

“As far back as I can remember, I was a player-coach,” she said. “In Calgary I had a couple of coaches who were very good and gave me the basis of what I used as a coach. You just pick things up as you go along.”

With the national team, the questions of funding would be an additional concern, prior to the modern era where federal funding, large corporate sponsorships and equal opportunity became reality.

She recalls when the team would get train tickets to get from their next game in the next town, but that ticket did not guarantee a seat.

“It’d be from hotel to train to hotel, and you’d end up standing on the train because your ticket didn’t include a seat. … It was like travelling as beggars. We had a budget and we had to allocate it very carefully. If a player wanted an extra drink with their meal, they had to cough up for it themselves.”

In 1967, while preparing for the Pan Ams, the national sports body wouldn’t buck up for new uniforms, so Currie went to Molson Brewery, which had sponsored her B.C. team, and worked out a deal for them to supply the uniforms. Because they weren’t permitted to have a sponsor’s name on the jersey, they agreed to have the number displayed inside the Molson’s trademarked hexagon.

“(Molson’s) was very generous. It was something they didn’t have to do.”

Currie was inducted into the Canadian Basketball Hall of Fame in 1994.

The long-time teacher at Vancouver’s Prince of Wales formed a women’s masters team that would win the world championship title in 1985 under the name ‘The Retreads,’ and inspire a documentary film.

“I was at a family member’s business one day watching him work. What he was doing was retreading tires, and I thought that was just like our team. We were putting a new tread on and getting back on the courts, so I said that’s what we were,” said Currie.

All the accolades and sporting highlights are fantastic, she agreed, but it was never about that when she went to play, whether it be basketball or softball, which she was fairly good at, too.

“It was just about having fun, and the people you’d meet and play with,” she said. “These (celebrations) are nice chance to reconnect with a lot of people. You hope when you see them again they’ll say hello and you can talk about then and now.”

Currie will be inducted Thursday in the builder-coach category, along with hockey’s Ken Holland and soccer’s Tony Waiters. Also being feted at the Vancouver Convention Centre ceremony are the 1968 New Westminster Salmonbellies – of whom the Record wrote about last year – skier Emily Brydon, football’s Roy Gerela, rugby’s Kelly McCallum, and hockey’s Daniel and Henrik Sedin.