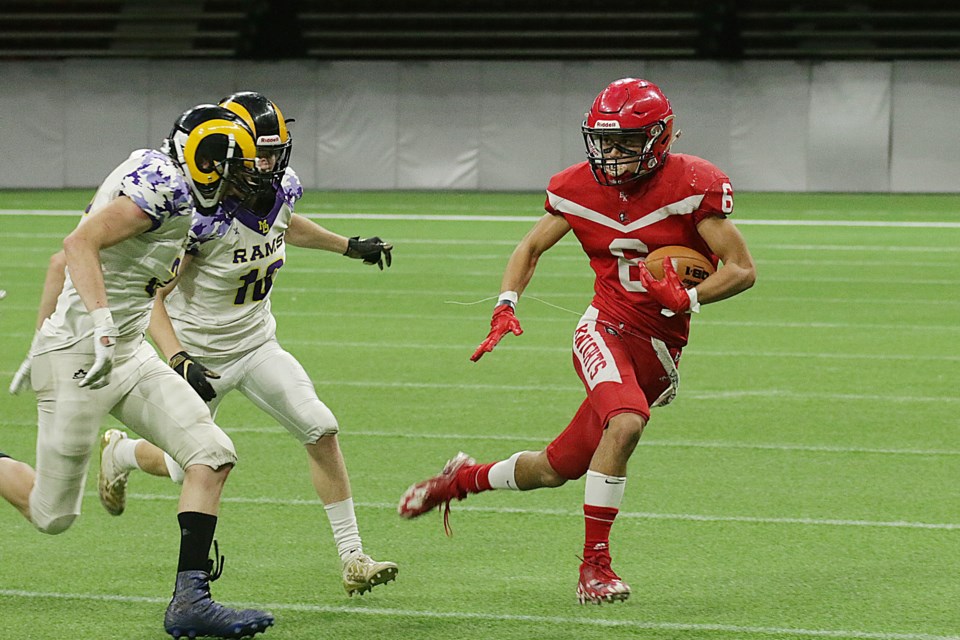 You’ve got to be good to be lucky and lucky to be good.

When you’re heavy underdogs, that goes without saying.

The St. Thomas More Knights put a thrill into an otherwise unspectacular night of football Saturday at B.C. Place, rallying to defeat top seed Mount Doug 24-21 to advance to the B.C. Subway Bowl semifinals (7:30 p.m. Saturday against Vancouver College). While every other quarterfinal was decided by two touchdowns or more, the spotlight game -- which pitted the defending champions against an undefeated underdog -- went down to the wire.

Shaking off a first half where the defending provincial champion Rams rocketed ahead 21-7 on a couple of big yardage plays, Burnaby’s squad meticulously whittled the deficit down on a succession of slick drives and a couple of key bounces.

Twice within a span of seconds the Knights fumbled the ball inside Mount Doug’s 10-yard line. Both times saw an STM player pounce on the loose ball. The second recovery was by standout tight end Alex Cordeiro, who fell on the ball after Nick Osho had it punched away on the one-yard line.

Cordeiro got his hands on it in the end zone, making it a 21-14 deficit with the team’s first major since early in the second quarter.

“It was just being at the right place at the right time,” said the Grade 12 two-way player. “We drove down the field and we knew we had to punch it in. Nick ran the ball really hard that drive, he fumbled the ball and it came right to me. I just jumped on it and tried to do my job. Luckily it was in the end zone, we scored and we’ll take the points.”

When they got the ball a few minutes later, STM pushed it down to the 16-yard line but were forced to settle for a 31-yard field goal – with Cordeiro getting it just inside the uprights.

The defence did its job in keeping the Rams on their heels, including an interception by Kane Ferrara, handing the ball to the offence with just over five minutes remaining in the contest.

Starting from their own 15-yard line, the Knights sliced down the field, with quarterback Anthony De Lazzari hitting receiver Jack Wagner on a third and 10 that moved the sticks for a 65-yard pickup. Osho and fellow rusher Rickey Parsons took turns on runs that put the ball at Mount Doug’s six-yard line, setting the stage for the game-winning and ninth play of the march.

Osho carried it through a maze, striding across the line to give the Knights the lead with 2 minutes left.

With a reputation as being a playoff machine, the Rams still had time to respond, but STM's Gabe Nacario intercepted Grade 10 Hunter Swift’s pass at the Mount Doug 35-yard line, pouring cold water on the Island team’s hopes.

“Rattling the quarterback, that’s what we love to do,” remarked Grade 12 lineman Kaishaun Carter. “We love to get in opposing quarterback’s head.”

Cordeiro said not being the favourite was perfect fuel, as it has been all year through a 7-0 run.

We’ve been playing this underdog thing all year long, we love being underdogs,” he said. “The Tweedsmuir game (Nov. 1, which locked up the conference title) we weren’t favoured either and won big. We love being the underdog and I love being an underdog. Being able to pull off that story is so good, it’s awesome.”

The Knights now get a rematch against fellow Christian Brotherhood school, the Vancouver College Fighting Irish. The two teams met in an exhibition test in early September, but that game was called at halftime, at the STM coaches request, after injuries whittled the team’s lineup to just a couple of subs.

The Irish were leading 28-0 at the time.

“That (game against VC) was huge moment for us. We were down 15 guys (by halftime). When we saw our depth guys sitting there and competing with them that meant a lot to us. We’re going to take it to them,” said Carter.