No opponent provides the exact same look, but the St. Thomas More Knights are aiming to replicate the passion and strategy which saw them leapfrog their way into Saturday’s B.C. Subway Bowl AAA semifinal (7:30 p.m.) at BC Place.
Nov 21, 2019 1:39 PM By: Dan Olson 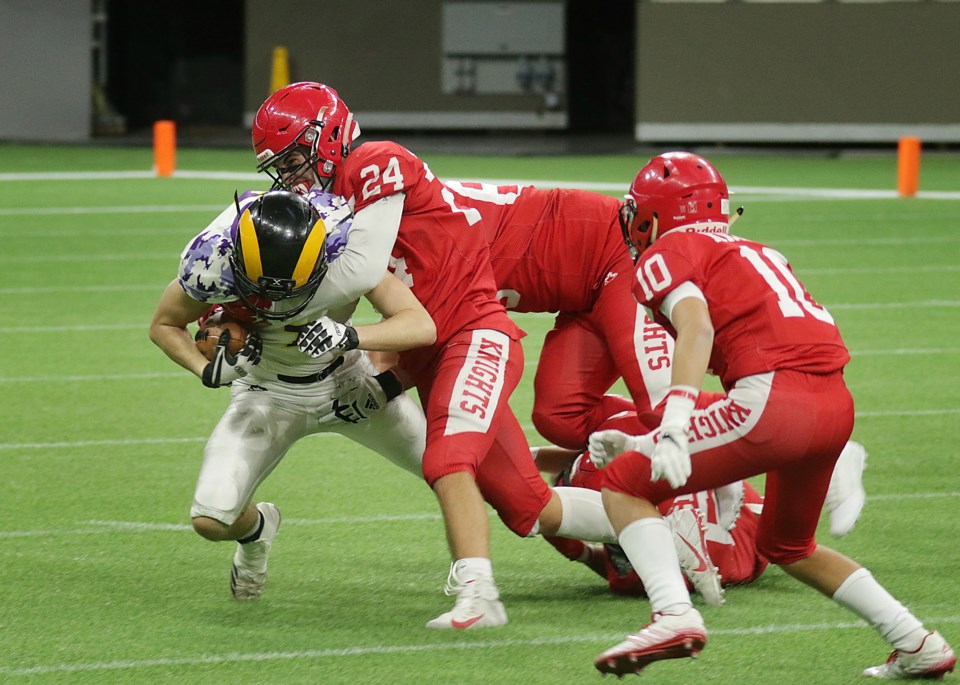 St. Thomas More linebacker Jack Wagner, No. 24, gets a grip on Mount Douglas' Jackson Reid during last week's quarterfinal game at BC Place. STM now lines up against Vancouver College on Saturday (7:30 p.m.), with the winner advancing to the B.C. AAA Subway Bowl final.Rob Kruyt

No opponent provides the exact same look, but the St. Thomas More Knights are aiming to replicate the passion and strategy which saw them leapfrog their way into Saturday’s B.C. Subway Bowl AAA semifinal (7:30 p.m.) at BC Place.

In their come-from-behind 24-21 victory over the Mount Doug Rams in last week's quarterfinal, the Burnaby squad had to occasionally stray from the tried-and-true steady path which earned them a 7-0 regular season record.

With a few tweaks, it will be a big part of what they unfurl Saturday against the Vancouver College Fighting Irish.

“Getting to the semis, we’re obviously, very, very excited,” remarked Grade 11 quarterback Anthony De Lazzari. “It was one of our goals, like, earlier in the season (when) we went to Hawaii. It was a goal for us.”

The match-up has nice symmetry – both Christian Brothers schools, although with considerably different footprints. There is a David (St. Thomas More) against Goliath (VC) angle, as the Vancouver school dwarves STM in student numbers. Their paths crossed in early September in an exhibition game that couldn’t mean less right now, though offers an interesting thread.

In that meeting, the smaller program had its hands full, then tied together by a series of injuries during the game's first half, which saw STM coach Steve De Lazzari request a forfeit at halftime due to a lack of healthy and senior-ready substitutes.

It stood as a 27-0 win for Van College, but now is a part of the motivation the Knights will bring to the BC Place turf on Saturday.

“That (game) was huge momentum for us. We were down 15 guys. When we saw our depth guys were sitting there and competing with them that meant a lot to us,” recalled Kaishaun Carter, who earlier in the week was voted the B.C. AAA Defensive MVP. “We’re going to take it to them.”

Much of what happened in the quarterfinal against Mount Doug would also apply for each major hurdle they’ve faced, De Lazzari noted.

“You’re going to deal with adversity in every game, you just need to bounce back from it,” the pivot said. “You can’t get bogged down by it, just focus on the next job. Do what you can do, just control the controllables. That’s what coach Kully use to say.”

That reference to the program’s former sideline leader is more than a bond linking the years and Catholic camaraderie on the gridiron. Although he died two years ago, coach Bernie Kully continues to be an inspiring guide for the players and coaches, with his words serving as a beacon through the challenges they face.

Against the Rams, STM erased a 21-7 deficit over the second half, including recovering a pair of fumbles in the span of a couple of seconds during a third quarter scoring drive.

“We had some bounces go our way (against Mount Doug) for sure,” noted head coach Steve De Lazzari. “I don’t know if the football gods were smiling on us, or maybe coach Kully up there, who knows. It was great to see some things go our direction for sure.”

Even a pre-game decision by tight end and linebacker Alex Cordeiro, to change his uniform number from four to 82, came out reading like just another part of providence.

“I broke my collarbone (in the Homecoming game in September) and was carted off the field,” recalled Cordeiro. “I had nine tackles that game as No. 7. Throughout the season we had a guy, Marc Abboud, who was hurt in Hawaii and I used his No. 4 through the season.

“(Abboud) dressed tonight and I thought he should use No. 4, so I just used No. 82 and it seemed to work as a charm. … (Graduated senior) Daniel Auld wore No. 82 last year and he was one of the guys I looked up to. I grabbed 82 and said I was going to look up to Daniel Auld and maybe I’ll get some inspiration, some guidance.”

Cordeiro scored a key touchdown by picking up a Nick Osho fumble in the end zone, and later kicked a 31-yard field goal, as part of the comeback. Auld, a freshman with the University of B.C. Thunderbirds, no doubt would be pleased to see his number play a part in the team’s quarterfinal win.

As they say, however, the only game that counts now is the one ahead of them.

The Knights take to their next game understanding, in fact embracing, another chance at being under-estimated.

“(Van College) is a really good team and we have to put in a lot of work this week if we’re going to be able to get past them. It’s going to be a tough game,” running back and safety Rickey Parsons said.

““We always love being the underdogs. We’re underdogs every year no matter what our record is. We just come out and play hard,” added Carter.

Asked to rate last year’s Knights – who fell to the Rams in the quarterfinals – and this year’s version, coach De Lazzari was adamant that this roster has taken it to another step.

“I’ve got to be honest, I think this team is a notch up. In terms (of) last year was all Grade 11 linemen. When you have that type of group in Grade 12 that started for two full years, you saw it (against Mt. Doug). They took over in terms of their ability and against a much bigger line in front of them. I’m so proud of the ways the boys played.”

In the last poll prior to the playoffs, Vancouver College was ranked second overall, one spot ahead of STM. The No. 1-rated team, South Delta, was bounced by Notre Dame last week.

It makes for a pretty impressive semifinal on Saturday.

“They have a lot of weapons. We have to stick to our game plan and do what we need to do,” said Anthony De Lazzari.