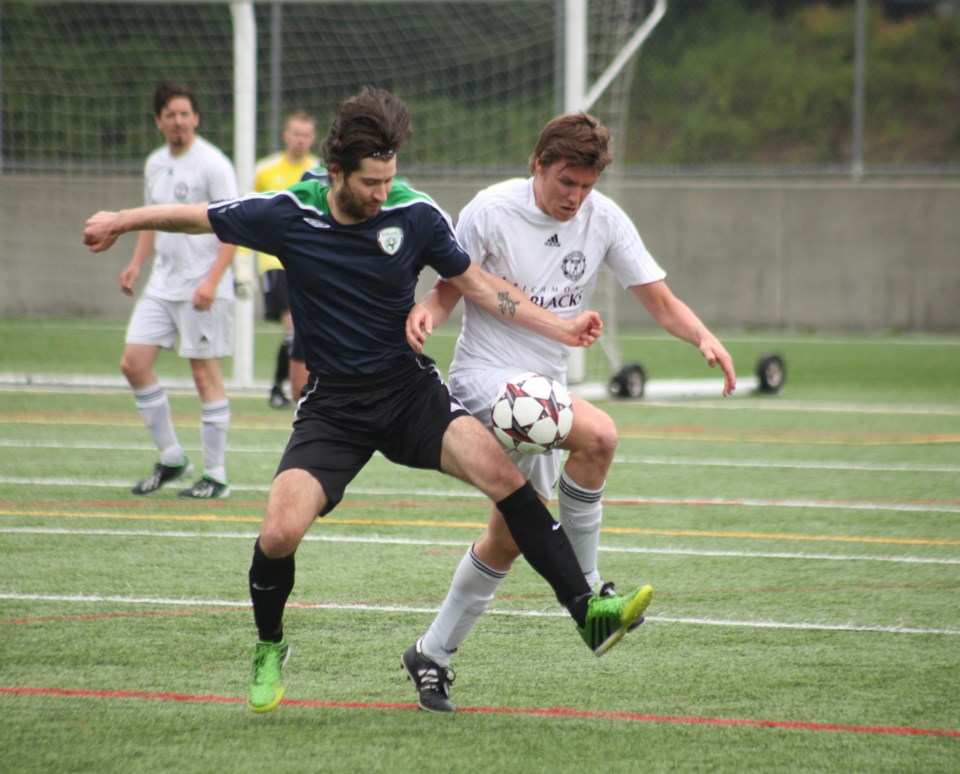 Derek Patrao, in black, wins a ball in the South Burnaby Fighting Irish's 1-0 cup-winning victory over Richmond in men's Provincial B Cup soccer on Saturday.Jason Lang

One goal was all that was needed to make Burnaby Men’s Soccer League history.

The South Burnaby Fighting Irish became the first team from Burnaby to ever win the B.C. Soccer Provincial B Cup following a 1-0 victory over the defending champion Richmond All-Blacks at Burnaby Lake Sports Complex-West on Saturday.

The Fighting Irish got that milestone marker from substitute Brian Fox off a blistering header just five minutes into the second half of play.
“I think it helped us going out as the underdogs,” said South Burnaby head coach Peter O’Sullivan. “I really had the feeling that this was going to be our day.”

The Irish settled into the game after the opening 10 minutes and received quality chances from team captain Luke O’Sullivan, Connor Finucane and Danny Williams.

All that positive buildup in play could have gone for naught had it not been Burnaby keeper Nour Fathy, who came up big on a late one-on-one breakaway attempt that he tipped past the post to preserve a scoreless first half.

Saman Safari, who scored the game-winner in last week’s cup semifinal, had to be replaced in the midfield by Fox.

The move proved prophetic after the coach gave Fox some last-second instructions.

“I told Foxy when Connor has the ball to go straight to the net. When Connor crossed it to the far post, Foxy made a bullet of a header to the roof of the net in the first five minutes of the second half,” said coach O’Sullivan.

Luke, Connor and Fox all had further chances in the latter half, but none of those were able to get past the Richmond keeper.

"Our back line was superb. We did not allow a single goal in open play. The only goal (against us) was on a penalty in the quarter-finals,” O’Sullivan added.

The Burnaby league in general is also deserving of praise, said the South Burnaby coach.

“We’re obviously delighted that Burnaby has been getting far more respect from B.C. Soccer,” said O’Sullivan.

In recent years, the Burnaby men’s league was awarded just one spot in the provincials compared with this season when they received four entries into the cup play.

“We’re very proud of our lads. … The boys thoroughly deserved to win that tournament,” said O’Sullivan.