Galaxy peak at u15 boys provincials 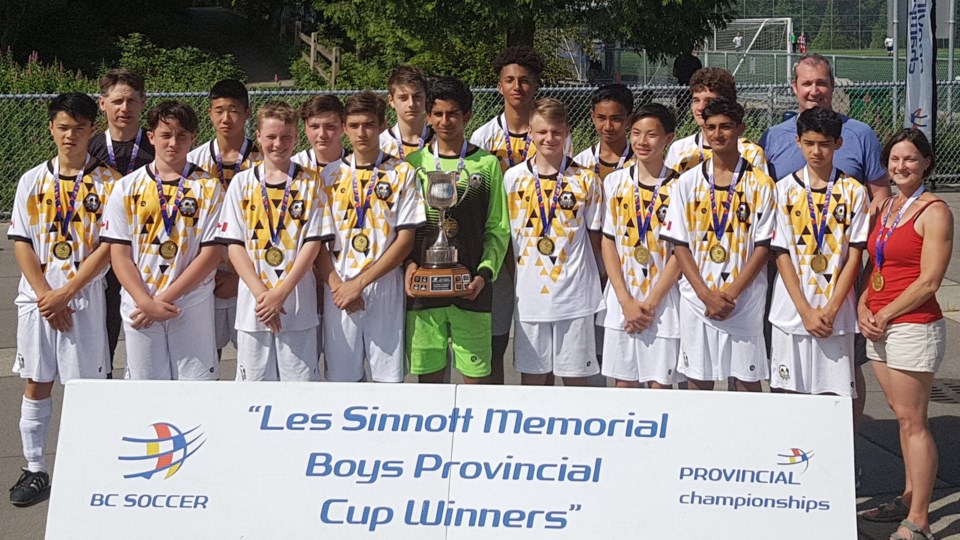 The provincial B Cup champion Wesburn Galaxy celebrate their victory earlier this month.Contributed

Combine 15 teenage boys, a soccer ball and a goal.

If that goal includes fun, other objectives will follow.

It was the recipe for the Wesburn Galaxy’s run through the 2017-18 under-15 boys soccer season, which ended two weeks ago with a victory at the Les Sinnott Provincial B Cup final at Burnaby Lakes West complex.

Caleb Yoon scored the only goal of the game, lifting Wesburn past the Penticton Pinnacles 1-0 in the championship match, capping a strong season for the squad.

As tight a game as it was, the Galaxy held a solid edge in play and netminder Aqeel Allidina was perfect in picking up the clean sheet – his third of the tourney.

The performance in the final was an extension of how the team approached each contest, beginning with the tourney opener where the Burnaby boys stopped Abbotsford 4-0.

“For me the thing that confirmed that the boys had the belief that they were going to win the championship was the warm-up to the first game against Abbotsford,” recalled assistant coach Gus McDonald in an email to the NOW. “Everyone was excited and focused. The energy was there from everyone and all the boys were clearly enjoying the opportunity to show Abbotsford what they were really made of.”

Wesburn then blanked Kamloops 2-0, with Ryan Nagy supplying all the offence.

In their third game of the tourney, the hosts battled Guildford to a 1-1 standstill, where Justin Tran’s marker earned the Galaxy the draw. The game saw the only goal Allidina would surrender.

“Whether it was Anthony Vargas and Koen Johnson winning headers against huge attackers, or Jeffrey Baldisimo and Jasman Hehar nipping in front of wingers to receive the ball, or Jacob Spartano generally clearing anything coming down the middle, the defence was always solid,” noted McDonald.

It bookended the season-opening four-game sweep at the club’s own Wesburn Labour Day tourney, launching a run that saw the Galaxy post a 14-1-1 regular season record. They tuned up for the provincials by going undefeated at the Surrey-hosted SX Cup three weeks ago, allowing just one goal against.