It was a tale of two cities, but both aimed for similar destinies. Monday saw the Burnaby South Rebels knock off the New Westminster Hyacks 100-91 in senior boys basketball, in a league game where the temperature rose as the game went on.
Jan 16, 2019 5:13 PM By: Dan Olson 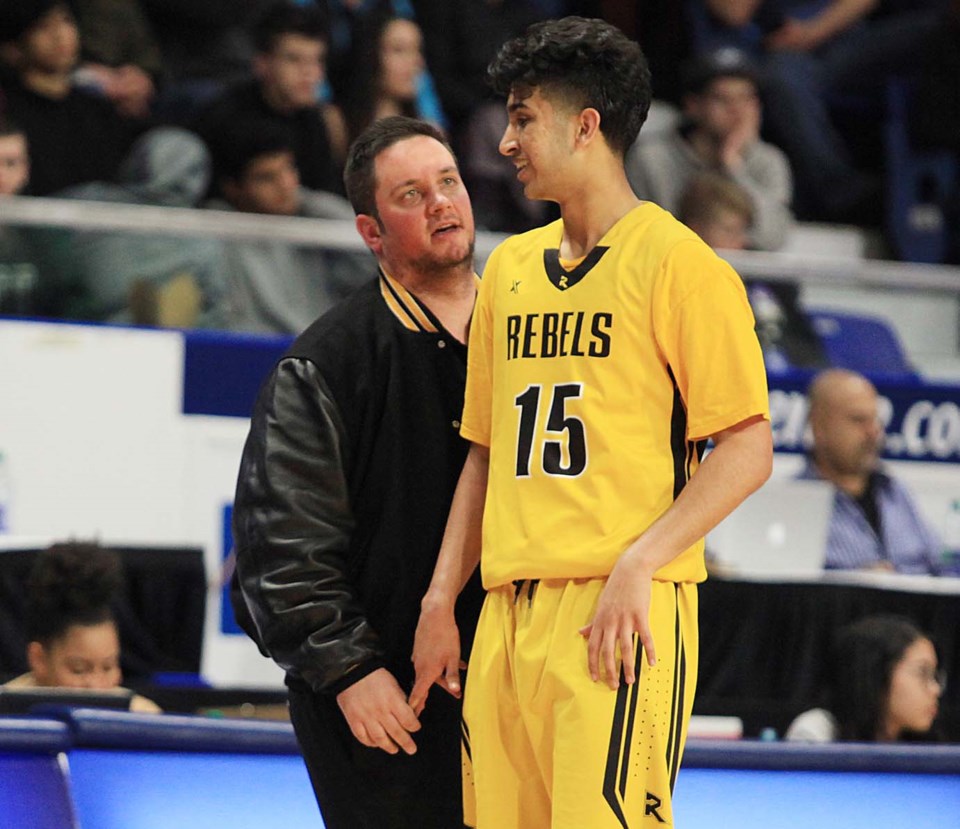 It was a tale of two cities, but both aimed for similar destinies.

Monday saw the Burnaby South Rebels knock off the New Westminster Hyacks 100-91 in senior boys basketball, in a league game where the temperature rose as the game went on.

It looked like a one-sided rout for Burnaby South in the first half. As is often the case, neither squad could claim a clean 40 minutes, and both coaches probably would like a quarter or more to re-do.

“(New West) came out flying that second half, they really brought it to us,” noted Rebels head coach Mike Bell. “We talked about getting at it, keeping what we established and working on that, but they took it to us. … The kids kind of struggled because we were playing kids out of positions. It was kind of hard but we’re seniors so we need to be able to handle that.”

After harvesting a solid 57-39 lead at the half, the Rebels put up the first basket in the second half only to witness a hungry Hyacks crew ramp it up with a 20-6 run to make it a six-point game with less than three minutes left in the third quarter.

And while New West would squeeze the deficit down to four points on back-to-back treys from Simon Cruz early in the fourth quarter, the Rebels regained their edge and restored some of that comfort zone for the win.

“We’re not bad, but we’re still a ways away,” remarked New West coach Ted Cusick. “We break the press a little better now. We had a tough time over the holidays with the press against some real tough teams. Now we’re breaking the press and that’s out of the way, but now we have to play defence.

“I’m not sure how you spell that word.”

While the last comment was a joke, for New West to catch the likes of Burnaby South and Byrne Creek – provincial finalists last year and the kind of programs you need to measure yourself against in preparation for a playoff run – it will take a serious effort. And if the Rebels are to reclaim the league banner and edge out Byrne Creek, who are also undefeated in league play, it won't be by offence alone.

The Rebels’ Baltej Sohal scored 29 points and added seven assists, while Giordano Khan had 22 points and eight rebounds. Kyle Kirmaci chipped in 14 points and Aidan Wilson contributed 11 points in the first half before getting rested for the night.

“I’m just playing my game. I like playing freely,” said Sohal. “We came out strong but (New West) had their runs. They fought hard. We had some good shots but we gave them too many shots.”

Luke Burton led all Hyacks with 22 points, while guard Mo Al-Ghreibawi cashed in 17 points, including 11 in the third quarter. Cruz finished with 14 on the night.

“We really wanted to win this game because we’re in the same district,” said Burton, a Grade 11 forward. “We never like to give up. We’ve been down 20-plus before, so we tried to bring the intensity and bring it back.”

While the Rebels parked Wilson, their six-foot-eight centre, on the bench for the second half after he reported some soreness to a lingering injury, and six-foot-10 standout Sasha Vujisic continues to rehab an injury that occurred during the season-opening tournament, New West had its own holes to fill.

Six-foot-seven Misho Rusov is still recovering from an injury, while Kirk Bothwell, at six-foot-six and one of the team’s more consistent players, was recuperating from a bruised tailbone suffered at last week’s Terry Fox Legal Beagle.

What Bell hopes to see down the stretch is, along with a healthy lineup for the first time since the season opener, a sharper performance defensively.

“Offensively, sure we put up 100 points, (and) most teams are happy with that. We’re more looking at the 91 we allowed, and that was a bigger feature for us,” he said. “(New West) made us break our goals and the standard of defence we try to hold ourselves accountable to.

“I want to see our defence improve. That’s the biggest thing - its going to be our focus the next few days, to tighten that up. We allowed way too many penetration lanes and open shots off a slow rotation."

Burnaby South, undefeated in league play and ranked No. 6 in the latest B.C. 4-A poll, is hoping to have all but Vujisic back for this week’s Abbotsford Snowball Classic.

“The atmosphere there is always phenomenal. Small gym, they always pack it and the community comes out. I just love being in a community like that, where everyone comes to support the school tournament. It’s kind of a family event,” said the coach.

If Monday’s win was a result less than satisfying, a loss last week to Holy Cross, 73-59, provided Bell with a better feeling.

“We were shorthanded (against Holy Cross) without Aidan and Baltej and Justin and Sasha,” said Bell of the game. “That outcome was a lot better. The kids, the whole bench worked really hard, it was really a building block and we were kind of in it until the last five minutes, then they pulled away.

“I was quite happy with that one, it was a good team effort for us, compared to how we played here in the second half.”

To underscore the effort, Holy Cross would continue that roll to capture last weekend's Legal Beagle tourney title in PoCo, vaulting them into the No. 1-position on the 4-A provincial rankings.

The return of Vujisic, meanwhile, is just a matter of time, but the coach is adamant that they won't push it. Having the provincial all-star ready for the playoffs is the main focus, he said.

“There’s no rush, we just need him once we start the playoffs. His fitness is on, he’s put on 14 pounds of muscle, not fat, because his speed time and footwork is still the same."

JUNIOR REBELS LIGHT IT UP AT EMERALD

Chalk one up for the Burnaby South junior Rebels in their battles with perennial powerhouse Vancouver College.

The boys basketball team knocked off the hosts 66-51 to capture the Emerald tournament title.

To advance to the final Burnaby South ripped a number of three-pointers in a 76-61 decision over Abbotsford. They opened the tourney by slipping past Oak Bay 58-49.