Huskies out-run Bulldogs in 3-A battle

The surprise dusting of snow Wednesday proved to be somewhat symbolic when the final buzzer sounded on opening day of the B.C. boys 3-A basketball championships in Langley.
Mar 6, 2019 11:37 PM By: Dan Olson 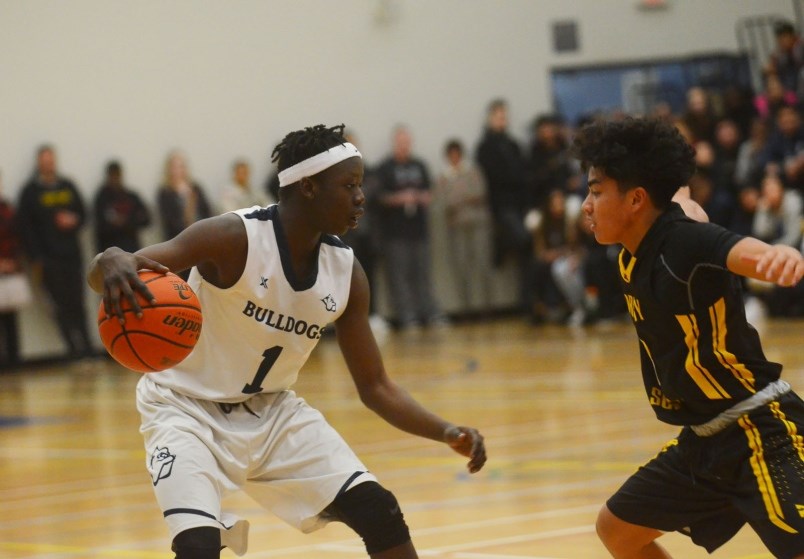 Byrne Creek's Bithow Wan, shown at left during an earlier league game against Burnaby South, put up 22 points in Wednesday's 74-48 loss to North Delta in the opening game of the 3-A B.C. basketball championships in Langley.NOW file

The surprise dusting of snow Wednesday proved to be somewhat symbolic when the final buzzer sounded on opening day of the B.C. boys 3-A basketball championships in Langley.

When it comes to inclement cold weather, a husky will outlast a bulldog each and every time.

The Byrne Creek Bulldogs launched the provincial championship aiming to reconnect with all that was terrific about last year's run, but were given a chilly reception from the North Delta Huskies in a 74-48 decision on opening day.

Slotted No. 8 and 9, respectively among the 16 qualifiers, the Bulldogs and Huskies would appear to be well-matched. Over three meetings during the previous three months, the Huskies prevailed twice, but both by close margins. Past history meant nothing on Wednesday.

Some standout three-point shooting by North Delta's Arun Atker in the first quarter, including the bucket that turned a 9-8 deficit into a 11-9 lead midway through the frame -- a lead they'd never relinquish -- ignited a run that proved too hard to stop. From that shift in momentum, the Huskies outscored Byrne 33-11 to hold a 21-point advantage at the half.

The second quarter proved to be an Iditarod in North Delta's favour. No matter how hard the Bulldogs battled, their opponent proved quicker on the boards and along the shooting lane. It was tough sledding for the Lower Mainland No. 3 school the rest of the night.

Although the Burnaby squad managed to put together a quick run early in the second half, thanks to a pair of three-pointers by Grade 12 guard Sufi Ahmed, to reduce the deficit to 13 points, North Delta stormed back and put any rally attempt on ice.

In the fourth quarter, a 16-point hole was dug deeper when the Bulldogs ran into foul trouble, sending the Valley's No. 4 squad to the line. Atker, who seared the Burnaby defence for 17 points in the first half, added six more in the final frame for a game-high 23.

The squad's record falls to 21-15, with three games to play.

Finalists a year ago, where they fell to South Kamloops, the Bulldogs now slide over to the consolation bracket where they'll face Island No. 3 and the 16th seed, Mark Islfeld on Thursday, 11:45 a.m. at the Langley Events Centre.