Mike James, a former Burnaby Laker Rugby Club standout, was among those inducted this week into the B.C. Rugby Hall of Fame at a gala celebration in Vancouver.
Jan 14, 2020 12:11 PM By: Burnaby Now 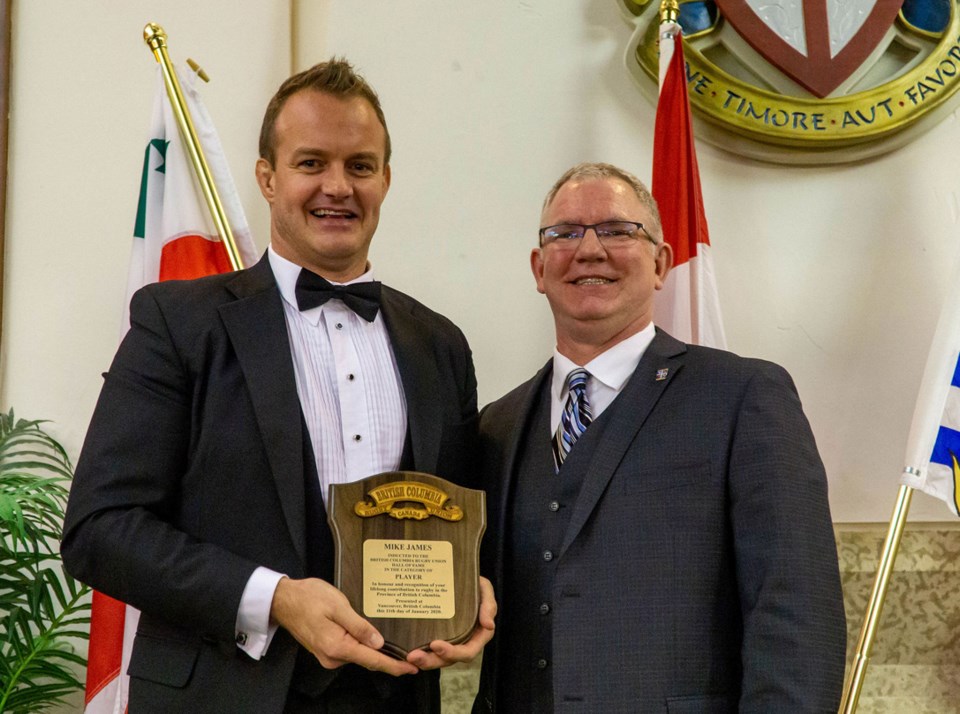 Mike James, a former Burnaby Laker Rugby Club standout, was among those inducted this week into the B.C. Rugby Hall of Fame at a gala celebration in Vancouver.

The national team captain for four tours and second row standout, was joined on the dais by fellow player Bobby Ross and builders Ian MacLean and Pat Palmer in being ushered into the provincial hall of fame.

As well as captaining Canada for nearly a decade, the Burnaby Sports Hall of Fame member recorded 57 caps in red and white, including nine World Cup matches. James’ career highlights include being Canada’s most successful professional player as a member of the French Barbarians and the Stade Francais, where he shared in the spoils of three Top-15 Premiership titles, as well as competing in a couple of Heineken Cup finals.

An Alpha Secondary alumnus, James got his start in the sport in Grade 11, then earned a selection to the Burnaby Buffaloes under-19 team and competed at the B.C. Summer Games with Team Fraser Valley. He competed in four World Cups – 1995, 1999, 2003 and 2007, then, upon retiring as a player in 2008, returned home to coach the Burnaby Lake premier team and later the B.C. Bears men’s provincial rep team.

Picking up the Joan Spray Award, for dedication and lifelong contribution to the sport, was Jen Ross, while Jas Purewal was presented with the Jack Patterson Memorial Trophy, in recognition for his contribution to rugby in the province.

Also honoured during the evening proceedings was Louise Wheeler, who was recognized for her years of service with B.C. Rugby.