Junior Rebels rocket past St. Pat's into BC final

The Burnaby South junior Rebels have a full-head of steam heading into tonight's (Tuesday) B.C. junior boys basketball championships in Langley. Behind a strong start, the Rebels stormed past the No. 4-ranked St.
Feb 26, 2019 9:55 AM By: Dan Olson 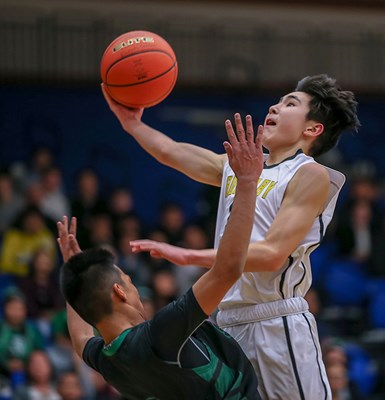 Behind a strong start, the Rebels stormed past the No. 4-ranked St. Pat's Celtics 58-35 on Monday to advance to the championship final for the second time in three years.

The final (Tuesday) tips off at 7 a.m. at the Langley Events Centre's south court.

Led by Karan Aujla's 31-point performance, including 20 in the first half, Burnaby South erased a 5-4 early deficit with 10 straight points, then maintained that pace until the fourth quarter.

UP 32-19 at the half and 53-23 after three frames, the team eased up in the fourth quarter in preparation for a battle against R.A. McMath in tonight's final.

McMath usurped the No. 2-seeded Vancouver College Fighting Irish in the other semifinal, turning a 13-point deficit in the third quarter into a dramatic 69-67 overtime win to advance to the final.

In Sunday's quarter-final, Burnaby South clipped Claremont 64-48, thanks to a polished 13-2 run that started in the third quarter and carried over into the fourth.

Aujla counted 20 points, including 10 in the final quarter, to lead the offence. Jareb Pineda hit for 18 points, while Zaborniak supplied 10 in support.

The squad launched the B.C.s with an 83-60 triumph over Jaffray, getting 25 points from Pineda and 20 from Aujla. In their second test, the Rebels topped Panorama Ridge 78-45 with a well-rounded rally. The Surrey school held a 17-13 lead after one quarter, but were unable to stop Burnaby South from exploding for a 16-4 run to take the lead 34-28 at halftime. Burnaby unleashed 13 treys on the day, including five from Zaborniak en route to 25 points and the Player of the Game award.