If they were under-estimated and relegated to the second tier of ranked teams earlier in the season, the St. Thomas More Knights are now in the B.C. High School AAA Football League spotlight now.
Nov 5, 2019 11:08 AM By: Dan Olson 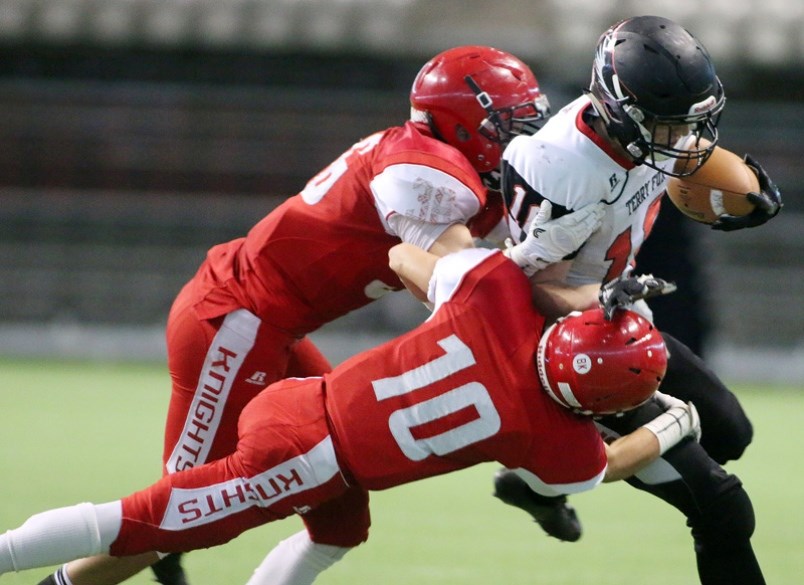 The St. Thomas More Knights wrapped up the regular season a perfect 7-0, defeating the Lord Tweedsmuir Panthers 34-14 in what proved to be for the Eastern Conference title. The Burnaby squad now gets a bye into the second round of the B.C. AAA Subway Bowl playoffs.NOW file

If they were under-estimated and relegated to the second tier of ranked teams earlier in the season, the St. Thomas More Knights are now in the B.C. High School AAA Football League spotlight now.

Although given short-shrift at the start of the season, and locked into the No. 5-ranking for the better part of the past month, the Knights completed the regular season with a perfect 7-0 record, knocking off one-time No. 1-rated Lord Tweedsmuir 34-14 at Burnaby Lake.

It sets the table for the squad to focus on the next game, likely Nov. 15 against the winner of this week’s Mount Douglas-Seaquam tilt in the opening round of the playoffs.

As one of only three AAA teams to go undefeated – No. 1 South Delta, at 7-0, and Rutland at 6-0 – the now ranked No. 3 Knights have earned all the attention they’ll get from here on.

Led by a determined and flexible defensive line, STM did the necessary ‘bend, not break’ routine against a feisty Panthers crew, building a 27-0 lead in the first half. Two of those majors were of the pick-six variety – the second week in a row the secondary has struck twice.

“It was one of those nights where everything clicked,” remarked STM head coach Steve De Lazzari. “(Defensive coordinator Jared Power’s) defensive scheme for what Tweedsmuir was doing all season was perfect. That really led to our two interceptions in terms of our disguised coverage.”

But prior to opening the scoring, St. Thomas More was put on the defensive when the visitors drove the ball deep inside STM territory, before being stopped on fourth-and-goal at the one.

Then Grade 11 running back Nick Osho unlocked the door early in the second quarter, dashing 90 yards to put the ball inside the Panthers’ 10-yard line, from where Jack Wagner took it to the bank a few plays later. It was the first of two five-yard bolts by Wagner, sandwiched around Rickey Parsons’ third interception-for-touchdown in the past two games.

After Parsons returned his interception 30 yards for a major, he would follow up by catching quarterback Anthony De Lazzari’s pass to move the sticks inside the Panther 20-yard zone. A handful of plays later, Wagner notched his second TD of the day.

Before halftime, Gabe Nacario got into the act with his own pick-six, this time a 47-yard return that put the score 27-0.

“It’s an unbelievable feeling when they get a pick (for TD) – Gabe and Rickey are amazing players. They showed it again today. Every time they get a pick it seems it’s going to the house,” said Osho.

While formerly No. 1-ranked Tweedsmuir put up a couple of TDs in the second half around Alex Cordeiro’s 32-yard TD catch, the momentum never shifted enough to put the result in flux.

“It was definitely a big game for us. Going into the last game of the season as a senior, I had my mind set on winning this game. Nothing else mattered and I’m happy with the outcome,” remarked Wagner, who also led the team with nine tackles.

“We came in expecting them [as] the No. 1 team in the province and we played up to them and played even better. … I just pounded it in, put my head down and got the job done.”

In his first year as senior QB, Anthony De Lazzari said it’s been the team that’s come together to make the run possible. Although they were 1-2 in exhibition action, the Knights have only grown tighter, sharper and stronger over the past eight weeks.

“We want to keep on going, that’s all there is to it,” he said. “We’ve been put into a position where we can have a lot of success and it’s starting to show through. I know coach De Lazzari after games against (Terry) Fox and Kelowna he just kept on saying, ‘Guys, two things -- realize your potential and clean things up.’ That’s what we’ve tried to do every week and it really came through this week.”

Osho, meanwhile, did everything but score, finishing with 201 yards on 16 carries. Getting to the end of the regular season without a loss was the highlight.

“Going undefeated in the conference? I was just focused on the game we had that week and I wasn’t thinking that far ahead, but now that we are, it’s an unbelievable feeling,” said Osho. “Especially for our seniors, I owe it all for them. I did it all for them, because this last home game meant a lot.”

The bonus part of the win and Eastern Conference title is the bye through the first round. An extra week to heal and prepare – for a possible rematch against last year’s quarterfinal foe, and 2018 Subway Bowl champion Mount Doug – is nothing to sneeze at.

“Mount Doug is an outstanding program and they’re very well coached,” noted coach De Lazzari. “We know traditionally they peak in the playoffs so that’s going to be the message. We met them last year in the quarterfinal and they took care of us pretty good so we’re going to be a lot more ready and prepared for them this year and hopefully we can come out with the W.”