Learning and leading on the court

Inside the lines, the Moscrop Panthers are eager to prove how they measure up. Beyond the court’s lines, they already have.
Nov 10, 2018 6:53 AM By: Dan Olson 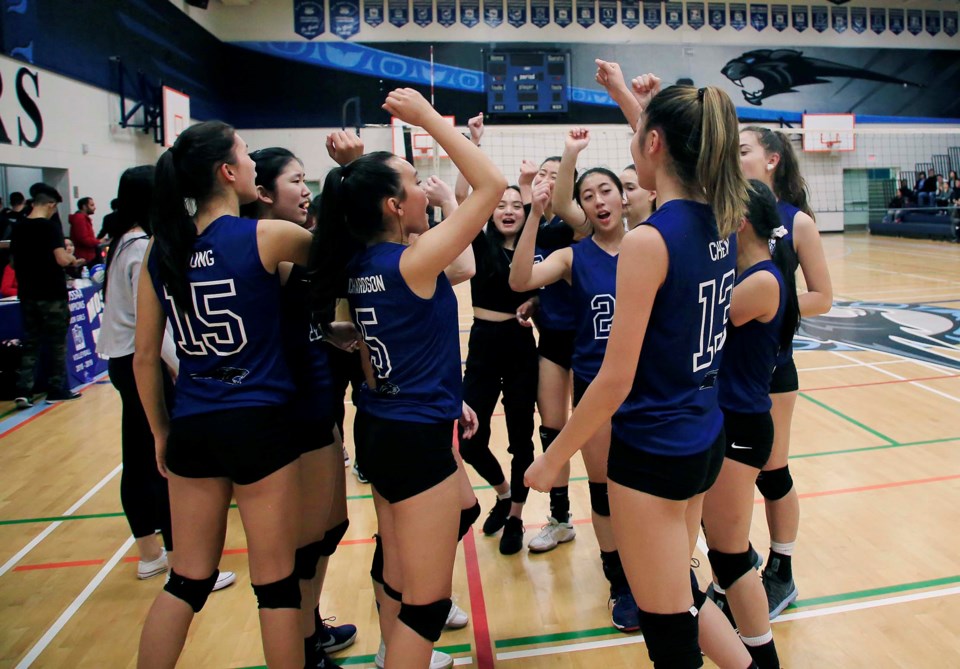 The Moscrop senior girls volleyball team added a Burnaby-New West banner to its wall. But even more important has been the mentoring and dedication the group has brought to the program that's left a mark.Lisa King

Inside the lines, the Moscrop Panthers are eager to prove how they measure up.

Beyond the court’s lines, they already have.

The senior girls volleyball team is entering the prime playoff season, where the top-ranked AAAA programs get a chance to trade shot for shot, with Lower Mainlands next week and provincials soon after.

Ranked No. 6 in the most recent B.C. poll, the 10-player squad – including nine Grade 12s – has charted a course and it hopefully ends on a winning note next month in Penticton.

But head coach Kim Or beams most of all, not about the win-loss record, but when talking about how this group has stepped up and contributed beyond their own game, to help others in the school with a program that has become one of the sports beacons of Burnaby.

“When we started, none of them really knew how to play and now at Grade 12, I’m enjoying every single day with this group,” said Or, who has known the nine Grade 12s almost all since Grade 9. “Not only are they good players, they’re really good people, citizens.”

He points to the school’s volleyball program and lists off the teams – each of the girls bantam, juvenile and junior squads are coached by the senior players. They put in the time to learn, share the responsibilities and mentor others, he said.

That goes along with the expectations of practice for the senior Panthers, where the goal from the start of the season was to do some damage at the provincial championships.

For the players, it’s been an opportunity to share their knowledge, as well as a chance to grow and learn how to lead. And while they’re 17 and a year away from university or college life, there's no shortage of things they could have chosen to do instead. But here they are.

The Panthers themselves are keen to share their passion for the sport.

“It forces us to learn patience,” noted middle hitter Alana Leung. “We’re coaching Grade 8s and we’re teaching them the game and it’s important to give them the fundamentals. You have to be gentle, have to compose yourself and I think it gives us a new perspective on the game.”

Coach Or sets the example himself. A teacher at Britannia Secondary, he coaches a team there and has been a major force in running Moscrop’s girls teams as well for a number of years. His philosophy is that anyone who wants to play, is dedicated enough to put the effort in, should have a spot on the team. It’s meant for the past few years the school has operated two senior girls teams – this year’s second squad, made up of Grade 11s and with another volunteer coach, played an exhibition schedule on the senior Burnaby-New West circuit.

Standing in front of a group of wide-eyed 14-year-olds and leading a practice, for most teenagers, is a pulse-racing idea. Setter Sara Tam said the lessons she’s absorbed from just watching Or handle his coaching duties has been helpful.

“(Coaching) definitely gives us a different perspective on (Or's) role and how much there is to think about,” said Tam, who moved from libero to fill the setter role this year. Taking on a coaching role had its similarities to shifting to a different position on the floor. “It was very different. I love setting. Where ever coach puts me, I’ll play.”

It’s a dedicated group that hasn’t shied away from walking the walk, Or said. Although he suggests this will be his last year, a few minutes later he catches himself and admits he may help out in 2019, “but I haven’t cleared it with my wife.”

Of course, there’s still a destiny to fulfill with this group.

Moscrop finished 14th at last year’s provincials and is hoping a strong Lower Mainland run – which the school is co-hosting with Burnaby South and Central next week – can create some positive momentum.

You don’t win in volleyball without momentum. Right now, Leung said the fact they’ve emerged with the local banner and are ready for a tougher slate of opponents isn’t any kind of guarantee. While they feel the pressure, in the end it’s how you comport yourself and tackle each new challenge where you can set yourself apart, ranking or no ranking.

“It’s hard. You don’t want that target on your back, (and) it’s easier to fly low. … But I think being ranked is humbling. You have to work hard for everything you do,” she said.