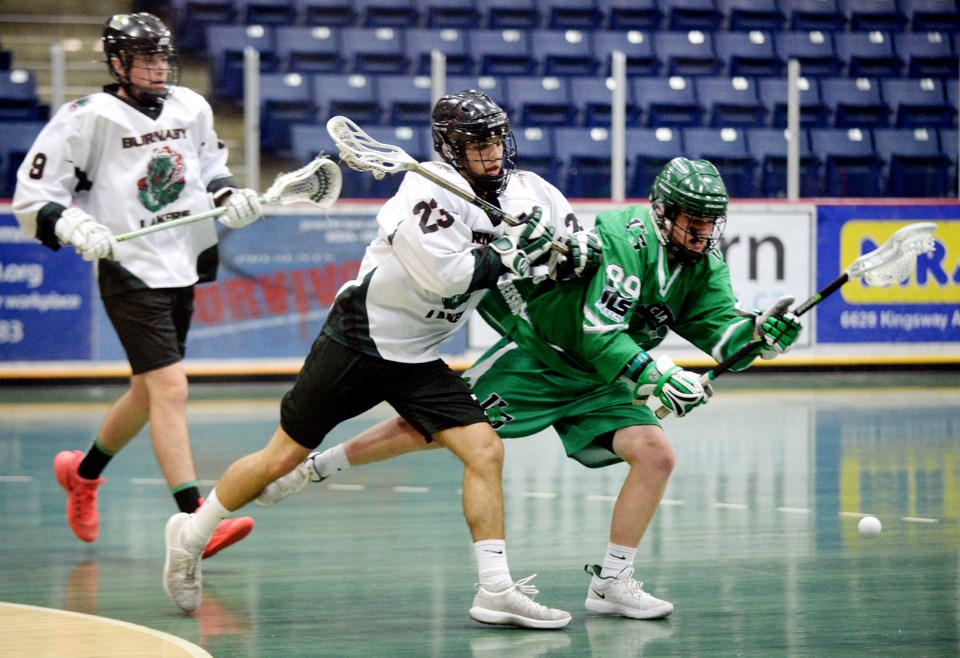 The Burnaby junior Lakers management left few stones unturned over the past month in its effort to improve the club's fortunes. Trades, a new coach and draft picks are part of the solution, general manager Brad Parker said, as the organization prepares for the start of training camp in March.NOW file

When it comes to charting a new course, the Burnaby junior A Lakers are not paying lip service.

The B.C. Junior A Lacrosse League club is in transformation mode, with general manager Brad Parker pulling all the levers at his disposal to push the once-proud franchise back into the conversation when it comes to playoffs.

In the past month, he’s overhauled the coaching staff, made a handful of trades and added a number of young faces to the team’s prospect list.

Needless to say, he’s itching for training camp and some real games to be played.

“It may sound trite, but I do believe that saying of ‘If you build it, they will come,’” said Parker, calling on a famous quote from the baseball film Field of Dreams.

Although it wasn’t the most recent piece to the puzzle, the largest move was getting lacrosse legend Russ Heard into the head coaching job, replacing Jason Dallavalle. Heard, a Canadian Lacrosse Hall of Fame member who served as an assistant with the New West senior A Salmonbellies until last year and served as head coach of the Lakers’ midget A squad, brings instant credibility as well as a major hometown connection.

“I’ve known Russ for a while but really got to know him this past year,” said Parker, who took on the general manager duties a year ago. “He’s iconic in terms of Burnaby lacrosse history, and we felt he brings extensive knowledge and experience to the job.”

Dallavalle resigned to spend more time with his family. The club finished dead-last with a 2-18-1 record and in the past five seasons have never placed above sixth. Considering the program dominated the Canadian jr. lacrosse scene for a decade between 1996 and 2007, the past 10 years have been hard to swallow.

“It didn’t get this way overnight, and we’ve suffered from not having a lot of kids coming up from the minors and not having many draft picks,” Parker said. The team addressed its draft picks issue also in the past week.

Burnaby filled a big part of the void by picking eight players in Saturday’s entry draft, including taking Semiahmoo’s Sam LaRoue first overall. The 6-foot-3 forward was a big part of the provincial silver medal winning program and forecasts as a versatile athlete on both sides of the ball.

“(LaRoue) is a very well-rounded player, a right-handed offensive guy who can play defence, who has size. I wouldn’t be surprised if he walked into camp and earned a (junior A spot) right away.”

At last year’s trade deadline, Parker shipped veterans Mack Burns and Patrick Shoemay – who was voted the league’s top defender – to New West for a parcel of picks and prospects. Although both players’ rights reverted back to Burnaby at the end of the season, the Lakers converted them into a pair of athletic 17 year olds -- Dylan McCormick and Kinsale Philip,
the New West Hyacks’ high school football quarterback and linebacker -- as well as a fourth-round pick.

Parker feels the incoming young talent are a great fit for a program that is eager to push for the playoffs this summer.

“My goal is to bring the Mann Cup back to Burnaby,” remarked Parker. “I think we’re younger, bigger and faster, and we’re built from the back on out.”

The team also announced Tyler Kirkby and Chris Levis as assistants to Heard, with preparations underway for the March 16 opening of training camp.