Forces on the court, the Moscrop Secondary pair of Fiona Chen and Alana Leung are equally powerful allies off it.
Aug 15, 2019 2:00 PM By: Dan Olson 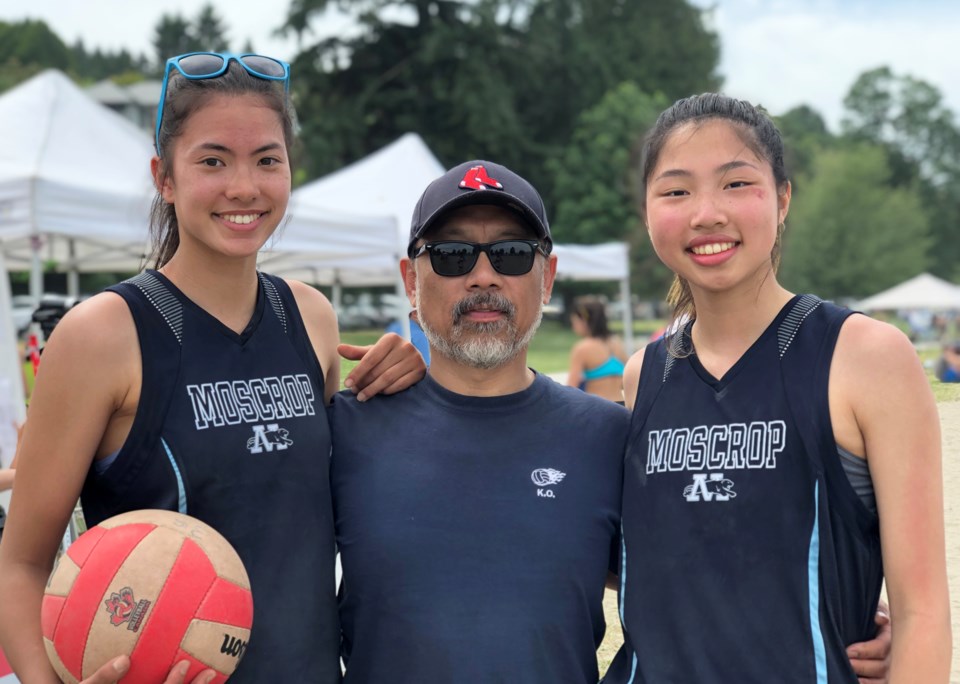 Moscrop grads Alana Leung, left, and Fiona Chen, at right, join coach Kim Or at the provincial high school beach championships earlier this year. The two players are now gearing up for the next stage of their studies and athletics, at opposite ends of the country.Contributed

Forces on the court, the Moscrop Secondary pair of Fiona Chen and Alana Leung are equally powerful allies off it.

Now the two may be going their separate ways on new amazing journeys, but the battles they’ve shared and the sport they love will be a great thread to connect them despite a distance of 3,540 kilometres.

Volleyball will be a great unifier, but it will also be where the duo face new challenges as they debut on their respective university courts.

“I’m going to have to work my butt off to try and match the fifth years that are going to be on the other side of the net,” notes Leung of joining the Ottawa Gee Gees. “Once you hit university the age range goes up – you’re playing with people who are (as much as) five years older and five years more experienced.”

For Chen, the game is where she puts on her game face. But despite being a cool, calm presence for the Panthers during their run to the provincial top-four last year, she wasn’t certain volleyball would continue after receiving her Dogwood.

“For the most part I didn’t expect myself to get to post-secondary (in volleyball), that volleyball was just going to be a high school thing, and then I’d focus on school. I hadn’t thought about playing past post-secondary,” she says.

Then UBC came calling. Chen has since learned that, while there is going to be a major learning curve, playing for the Thunderbirds was what she wanted to pursue.

The middle blocking duo were primary contributors to Moscrop’s Lower Mainland championship win last fall, culminating in a fourth-place showing at the B.C. 4-A provincials.

“I was pretty proud of our team. It was like a family, and a second family to me. We could share our problems and they’d always be there for you,” says Chen.

It came on the heels of her own Team B.C. experience last summer, which gave her a valuable taste of what the next step will be like. She contributed to B.C.'s win at the Canada Cup, and garnered a new appreciation for the competitive battle needed to reach the national level.

“I actually didn’t expect myself to make it because during the trials there were so many talented and amazing girls,” Chen recalls. “I felt pretty fortunate just to make it. The experience was phenomenal, the coach was really nice and taught the whole team how to improve and play the game better.”

She chose the Point Grey campus for both its educational opportunity – she is considering majoring in either land and food systems sciences or medicine – and sports. She also liked the idea of staying close to home.

For Leung, spreading her wings was one of the attractions of heading east. It was the Ottawa program that won her over.

“When you’re picking a university that you want to go to for the next five years of your life, you want to be sure you gel well with the people there, that you like the location and you’re going to get a good education,” she says.

A recruiting visit last March, where she met the team and saw the campus, ended with Leung findng a place where she felt both comfortable and excited by the challenges ahead.

“The player-fit was really good, I feel like I fit in fantastic there. The campus is beautiful, it’s like right next to downtown Ottawa. If we ignore the winters I think I’m going to have a great time there,” says Leung.

A brand new engineering building, where she aims to spend a lot of her non-volleyball time as a civil engineering student, was icing on the cake.

The past few months have given her a sharp foundation on how to make the transition, with her making Team B.C. and playing at the Canada Cup last month in Halifax.

“Team B.C. is so much fun because you’re training with really high-level athletes and everyone is really invested in the sport, so it’s really cool to have everyone buy in like that.”

B.C. would go on to place third at the tournament.

Kim Or, who coached both at the Apex club and Moscrop, has always stressed the process part of the game. Players like Chen and Leung built their skills through heavy practice loads, and by the end of their high school careers were among a number of teammates who paid it forward by helping coach the younger teams.

Or says the duo were terrific teammates who always put the group first.

“I can honestly tell you that the girls really enjoy the journey and process more that the championship itself,” he says. “You probably know that we never really celebrate much or go overboard when we win.”

With Apex, the pair were part of a u16 national title and brought home silver at this past spring’s u18 championships.

Leung’s beginnings in the sport came later than most. A dedicated dancer growing up, she picked up volleyball in Grade 9 at Alpha Secondary.

“Before volleyball I thought dance was the way for me,” she says. “I was ready to buy into that, but then volleyball came along. One season I did it and that was it for me, volleyball became my sport. Before that, I hadn’t really been in any high-level sports.”

When she transferred to Moscrop, where her father teaches, she had to sit out the season but did everything else with the team. That crew entered the league playoffs favoured but were upset by Burnaby Central in the final. It was a painful moment but one that provided an incentive for the championship run in 2018.

“That (loss) definitely sticks out because people were really disappointed. But then also it’s a message that you also have to get back to work,” Leung says, echoing one of Kim’s favourite instructions.

“This year we won the banner game and we won the (Lower) Mainlands. That’s such an incredible feeling and incredible feat. It’s so exciting that we get to have that memory forever. Its things like that where you feel really intense emotions that stick with you.”

Chen said her time with her Apex and Moscrop teammates was where she learned to love the game.

“Teamwork was so important. Teamwork, resilience and grit,” she says. “(Alana is) very kind, humble and just caring to everyone. She’s always there for you.

“She’s very hard working, she’s just works her hardest to get to where she is right now, which is with Team B.C.”

Leung is equally as effusive about her friend.

“Everyone has their little dynamics, and Fiona adds to this culture of (being) humble and work-hard. It’s not for the results but you’re here to play the game at the best level that you can. She’s fantastic as a teammate, she doesn’t get too high, she doesn’t get too low and that’s exactly what (coach) Kim wanted in our team,” says Leung.

If fortune smiles down on them, they may get to meet someday soon at the U Sports volleyball nationals.

“I’d love to see that happen. We’ve been talking about that too. I think that would be hilarious,” says Leung.