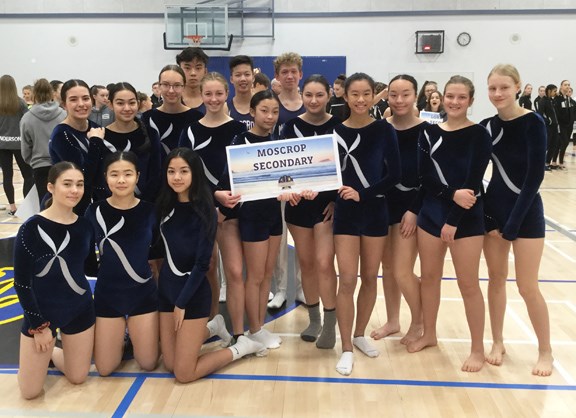 The Moscrop gynmastic team combined to place fourth for the third year in a row at the B.C. High School gymnastics championships last month in Delta.Contributed

The team finished fourth for a third straight year, this time among more than 80 schools represented.

Led by Level 3’s Maddy Gomes, who finished fifth all-around, the team continued to put up strong point totals at the intense meet.

Gomes recorded the top score on beam in the highest category in the competition, against a pool of 60 athletes who primarily are elite club competitors.  She also finished fourth-best on floor.

Katrina Dang, Joanna Larpin and Eugenia Demendeeva were in a close battle for a podium finish, with Dang scoring bronze in senior girls’ Level 1. Dang’s score was highlighted by a third-place showing on beam. Larpin placed fourth all-around, recording a seventh-place result on floor.

In fifth spot was Demendeeva, who collected the fifth-most points on floor.

In junior girls’ Level 1 competition, Sophia Battiston garnered third-best score on beam and fourth on floor, en route to 14 all-around. Also making top-20 finish were KayAnna Vu, with the fifth place result on floor, for 17th all-around, and Emily Lavin, at 17th overall, with the fourth top score on floor.

Cameron Louie staked out the third-best mark on parallel bars to place fifth all-around in Level 2, not far off the mark from division champion Sava Savkovic of Alpha. Coming in 10th all-around was Liam Farbridge.