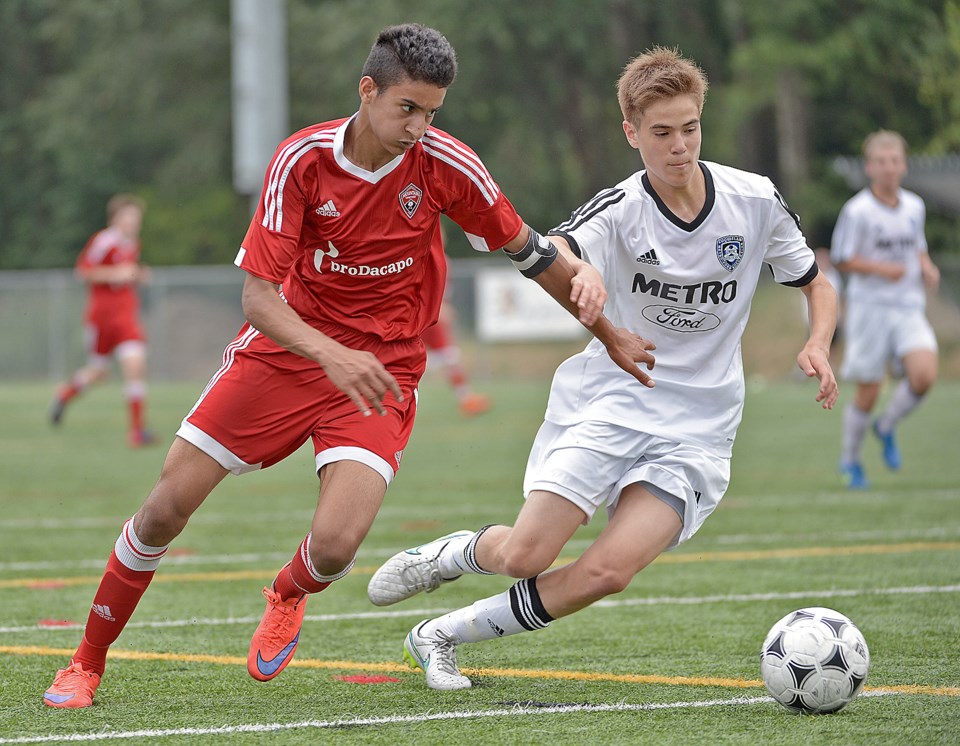 The under-18 league runner-up Mountain girls defeated regular season champion Surrey United 3-1 with a grand display of entertaining football in the provincial final at Burnaby Lake Sports Complex-West on Sunday.

The cup win was a fitting finish for a talented u-18 girls’ team that had failed to win a B.C. title up until this weekend.

“It was our last game as a team, and for some it was their last game. … It was our last chance,” said game MVP Allyson Dickson of Burnaby following the game. “It was probably one of the best games. We played like a team.”

Mountain took control of the contest from the outset and scored off a free kick created by a spirited challenge outside the penalty area by the hard-working Dickson.

Lauren Ehrhardt got her head on the ball off an Andrea Perrotta set piece to give Mountain an early 1-0 lead.

Addy Townsend’s steadying presence in the midfield gave rise to numerous buildups in play for the Mountain girls.

Ehrhardt and Perrotta hooked up again for United’s second goal with the latter letting a cannon of a shot go from outside the box, beating the Surrey keeper to the far post.

Mountain began the second half with much of the same persistence.

Dickson was sent through early in the half, and only a desperate palm save kept the deficit at two.

Mountain was in full control until midway through the period, when a miscue between keeper and defender in the back end led to a Surrey score against the run of play.

That goal by Gurneet Dhaliwal changed the complexion of the match, creating desperation at both ends of the pitch for the two clubs.

Dickson quickly replied with an aggressive challenge off a through ball at the top of the box.

Townsend subbed back in and immediately created a great counterattack that was eventually cleared out of trouble.

Teagan McManus also had a later shot at goal that whistled over the bar.

Dickson then created a turnover at midfield and curled another Mountain shot just high of the bar.

The Burnaby North grad was finally rewarded for her tireless play, putting the game away with a goal off a flick-on into the box late in the game.

“They’re a very talented team all-around. It was their final year. They had to keep it together, stick together, work together. It’s the first provincial cup they’ve won,” said Ian Tregonning u-18 coach and Mountain United’s technical director.

Mountain contested three other cup finals at Burnaby Lake, winning the u-13 boys’ final 4-2 over Fraser Valley Premier in a battle of the top-two regular season clubs to start the full day of age-group finals.

Trailing 1-0 early, Mountain finally found the equalizer and went on to add the provincial cup to its regular-season banner.

The u-15 boys were unlucky in their final against Metro-Ford, falling 4-3 to the Coquitlam club.

Mountain won the regular season over Coastal FC with a 10-1-3 record but fell prey to a couple of late goals by the third-place club, including the game winner at the final whistle.

A bottom finisher just three seasons ago, the Mountain girls show where good development can take you, said Tregonning.

“We, as a club, continue to develop and produce players for the next level and more importantly provide an environment that players can reach their true potential,” Tregonning added. “A massive credit must go to the work of all the coaches at MUFC and the staff behind the scenes that help make this happen.”