The Burnaby Mountain Lions exited the zone championships in a good place. The Lions posted the best aggregate score in the junior division, accumulating a landslide 231 combined points between the girls and boys division.
May 28, 2019 9:16 AM By: Dan Olson 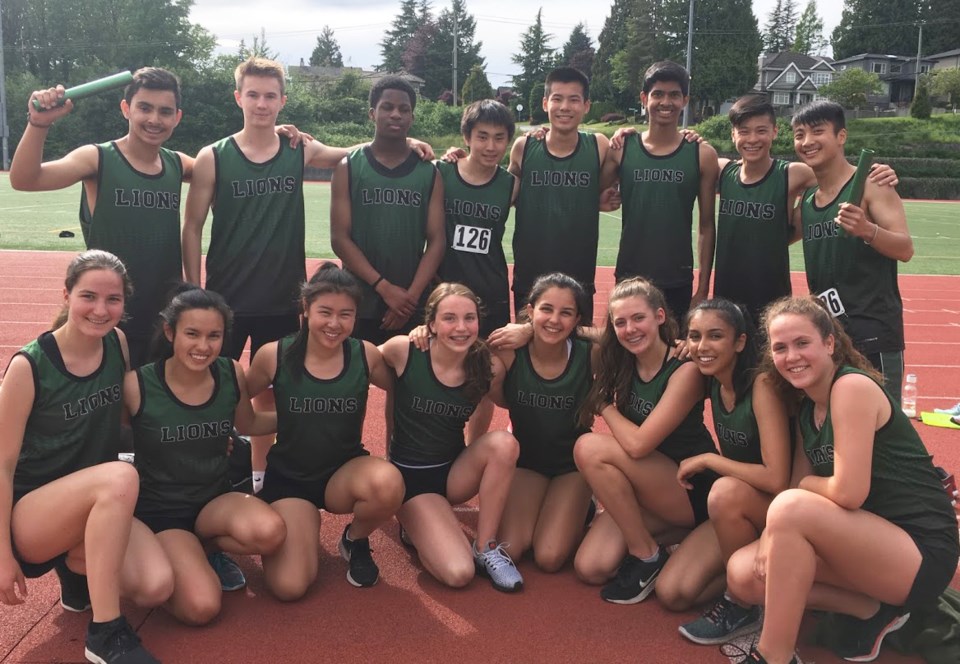 The Burnaby Mountain Secondary's junior teams delivered the goods last week at the zone track and field championships. Among the schools from Burnaby, New West and Richmond, the Lions posted a junior boys and girls aggregate total of 231 points.Contributed

The Burnaby Mountain Lions exited the zone championships in a good place.

"We knew that we had a strong junior division and that we would be in the hunt to win, which we did," noted Burnaby Mountain coach Larry Ryan. "Overall, we had 56 entries from 24 athletes in all divisions."

In the senior boys front, Mountain tallied 78.5 points, second only to New West’s 96, and finished third overall with 109.5 points. Burnaby Central was second, at 151 points, with New West placing first with a combined senior team aggregate of 176.

Thomas Luong established a new personal mark with a javelin toss of 46.12m. Other medalists include Samiksha Chand, who netted a silver in the 100m hurdles and bronze in 400m hurdles, Brayden Kayode, a silver in long jump, and Alastair Yeung, with twin third-place results in long jump and triple jump.

Kiran Wanniarachch cleared 1.85m in the junior boys high jump for gold and a personal best. The Grade 8 provincial champion a year ago, Wanniarachch enters this week’s event ranked second in B.C.

Teodora Lojpur pinned a gold and personal best in the girls’ javelin, with a distance of 27.42m, and added a silver in the 80m hurdles, while Haruki Okamoto secured PB’s in the 800m, 1500 and 3000. Okamoto’s time in the 800m won him a silver, while the latter two were bronze-worthy.

The Lions are sending 15 athletes to compete in 29 events.