It happens to every school sports program, so it comes as no surprise that the Byrne Creek Bulldogs are embracing a youth movement.
Jan 7, 2020 4:10 PM By: Dan Olson 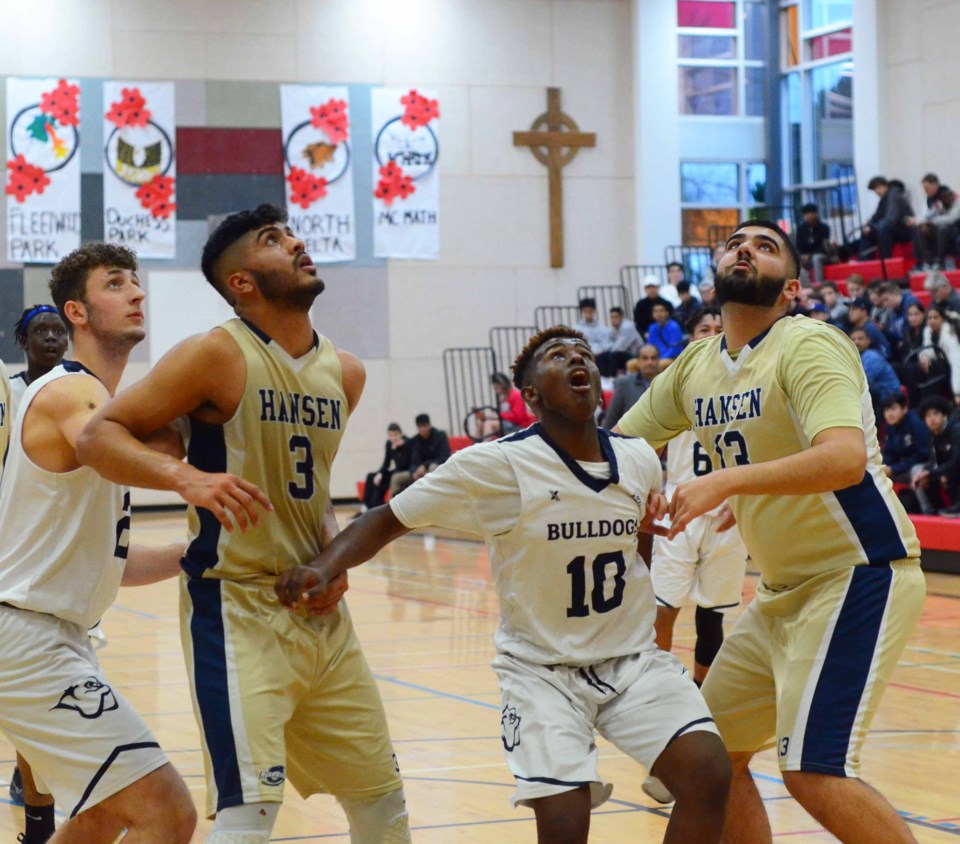 Things are looking up for the Byrne Creek Bulldogs senior boys basketball team, thanks to a solid crop of Grade 10s and 11s like offensive-minded guard Mukhtar Afadish (No. 10, centre). The squad is aiming to make a positive impression at this week's St. Thomas More Chancellor Invitational in Burnaby.Cornelia Naylor

It happens to every school sports program, so it comes as no surprise that the Byrne Creek Bulldogs are embracing a youth movement.

A projected powerhouse team on the senior boys 3-A basketball circuit the past five seasons, the program is gaining confidence and accomplishments as it transitions with a mostly new roster.

And while they don’t have any one taller than six-foot-three, the squad – with a starting lineup comprised of Grade 10s and 11s – makes up for that deficit with a lot of heart.

“The progress has been really promising,” coach Bal Dhillon said. “We have found our play style pretty smoothly, and we’ve made improvements in areas we wanted to do.”

Starting tomorrow (Wednesday), the squad ventures into the St. Thomas More Collegiate Chancellor tournament, with Rick Hansen their first round opponent (3:30 p.m. at STM). A victory on the first day would see them likely play the No. 1 team of the 3-A circuit, G.W. Graham in the quarterfinal (5:15 p.m. on Thursday).

Last year’s Byrne Creek roster boasted nine Grade 12s, qualified for a third straight provincials where they finished 10th overall. Pre-season polls listed them among the top-10 before the start of this year.

The success of the season isn’t hinging on a 3-A B.C. tourney ticket, however; Dhillon says the main target is to build character, develop healthy habits and a camaraderie that gives them a fighting chance every time they step onto the court.

“What we want to do is offer an opportunity for these kids to compete at a high level,” remarked the coach. “If you’re improving every day, you are learning and having fun, that’s the big picture.”

It’s been a pretty steady trajectory upwards since the first tip off.

They counted earlier victories over Burnaby North (102-61) and Hugh Boyd (86-67) during the last week of November.

That high-energy route has resulted in a few stumbles, but more times than not Byrne stuck close.

“We’ve done OK. We’re young, we don’t have a starter in Grade 12, but we have four (Grade 12s) on the roster,” he noted, adding a handful of players were part of the program last season, including catalysts Bobby Mabeny, Alex Flores and Mukhtar Afadish.

He noted that in every game the team has won, everyone had their hands on the wheel – including last week at the team’s own tournament, where they finished a perfect 3-0.

After taking an opening-day 91-78 win over L.A. Matheson, the Bulldogs racked up back-to-back decisions Friday over Britannia and Burnaby North – one after the other – by scores of 89-57 and 88-67.

Leading the way on the final day was Afadish, who counted 40 points in each game for an 80-point day.

“We thought it would be a good test of the team’s conditioning and competitive drive, to see us play two straight games against two good opponents,” noted Dhillon.

Mabeny was named the tourney all-star, as voted by the referees, while Flores, a forward, and Shisogora, a guard, were named as all stars.

“Bobby controls the whole game and he doesn’t need to score to control it,” noted Dhillon. “He will have highlight plays on the floor or at the basket. He’s a very smart player.”

Among the players who’ve emerged, Samuel Kitumaini is an example of the kind of dedication the team exemplifies on its best days. A bench player last year at the junior level, the Grade 11 guard has made an impressive jump to the senior level and worked his way into the starting five.

“He’s really worked hard to improve. Here’s a guy who wasn’t starting as a junior but been a key player with us as a (first-year) senior.”

The different dynamics, coming after losing the last of a strong veteran core that had spent the past four years among the province's heavyweights, gives the coaches some new chances, too.

"We don't have the height we had the past four years," reflected the coach. "We are playing a different style, and you look at the components of your team and build from that. We've had to find a way to play without (six-foot-six forwards)."

After the Chancellor tourney, the Bulldogs play its second league game on Monday, when they host the 1-2 Burnaby Central Wildcats (7 p.m.), then head to Richmond to participate in the Bob Carkner-Steveston tournament next weekend.