The Burnaby North Vikings couldn't have started much colder, but by the final buzzer they had the red-hot hand.
Jan 25, 2019 9:15 AM By: Dan Olson 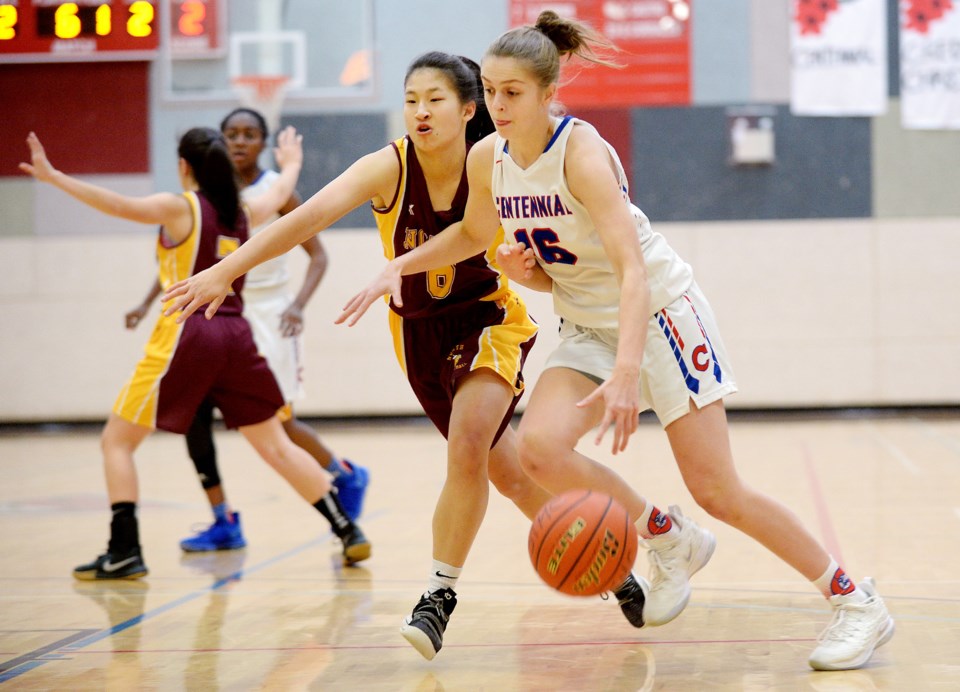 The Burnaby North Vikings couldn't have started much colder, but by the final buzzer they had the red-hot hand.

In a showdown of Burnaby-New West senior girls basketball league leaders, the Vikings overcame a slow start and an eight-point deficit to beat the previously unbeaten Burnaby South Rebels 51-42 on Wednesday.

The win plugs Burnaby North temporarily into the top spot in the seven-team circuit with a 5-1 record. Although their schedule is complete, both the Rebels, third at 3-1, and Burnaby Central Wildcats, second at 4-1, have games remaining.

"The girls brought huge energy, they wanted to compete hard for their last game," she said. "Our seniors really led our energy level and they put it together for an entire four quarters, which was the difference."

It was a sluggish start, however, as the first quarter was nearly half over before Mika Kurahashi drained a pair of free throws for North's first points of the night. The Rebels, who entered the game without a league loss, staked out a 12-4 lead thanks to six points from Dilara Altun. In the final minute, the Vikings were not only winning the boards battle, but starting to find their range.

They began the second quarter with eight straight points, including a pair of back-to-back layups by Kurahashi, before Awek Deng knocked down three buckets and a free throw to leapfrog Burnaby South into a 19-17 lead. But it proved short lived, as seniors Morgan Chow, Italia Paris and and Grade 11 forward Mandy Li led a rally that propelled the home team into a 24-19 advantage at halftime.

South pushed back in the third quarter, closing the gap to two points, but were unable to build on it.

In the final frame, the Vikings canned 20 points to lock down the win, proving that the start isn't as important as the finish.

"It was a slow start for us," noted Oatway. "I actually think the slow start worked for us. It allowed us to not get into a hole before we got ourselves running. We had to trust that by working hard to get the boards, the finish would come. They kept working at it."

Kurahashi led all shooters with 18 points, including eight in the fourth quarter, while Chow contributed 13 points. Sammy Gee chipped in 11 points.

Oatway was impressed with the balanced contributions, which made it tough for the Rebels to focus on just one player.

"Those three definitely led the offensive finishing, but Julia MacLean, one of our seniors whose kind of new coming back to basketblal, her effort out there to own the boards created every opportunity for our team, so a hugh shoutout to Julia."

North's seniors -- Sam Urquilla, Juliana Valero, Chow, MacLean and Paris -- got their bouquets before the game.

Burnaby South's players, who were coming off a busy schedule that included three games at their own tournament the previous week, struggled with turnovers and on the boards.

"I don't know how many we had but we had a lot of turnovers," remarked assistant coach Mark Zaborniak. "(Burnaby North) were hustling. They hustled very well, they were very good on the boards and they were athletic."

"They beat us with intensity," added co-coach Steve Glover.

He noted the good efforts by Stephanie Zaborniak, who led the Rebels with 17 points, including 11 in the fourth frame, Tina Liu Laini Glover and Altun. Deng, who had to leave at halftime due to a school project, was enjoying a solid game too.