On the rebound Rebels end B.C.s on three-game streak

It had its share of twists and turns, but the Burnaby South Rebels senior girls recovered nicely from an opening round upset to place ninth overall at the 4-A B.C. basketball championships last week in Langley.
Mar 2, 2020 4:57 PM By: Burnaby Now 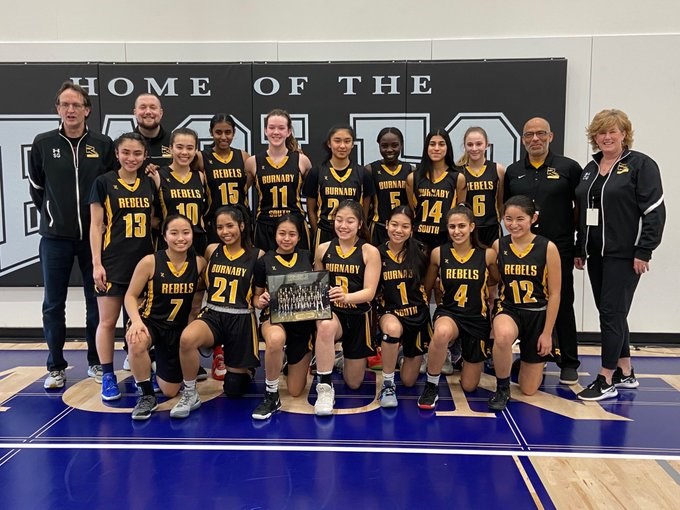 It had its share of twists and turns, but the Burnaby South Rebels senior girls recovered nicely from an opening round upset to place ninth overall at the 4-A B.C. basketball championships last week in Langley.

By outlasting Earl Marriott 70-58 on Saturday with some brilliant runs, the Rebels claimed the consolation bracket's best finish, going 3-1 at the 16-team tourney.

Senior Awek Deng enjoyed a storybook finish to her high school career, cashing in 34 points, including 16 in the third quarter to help overcome a 39-34 deficit in the third quarter. It was actually a bigger hole to start, as the Mariners took it to the Rebels from the opening tip-off with a 12-3 advantage. But the Burnaby squad proved resilient throughout the contest, going on a 15-3 run to lead 18-15 after the first quarter, then power ahead 32-24 midway through the second frame.

Marriott was equally as committed to ending the season on a high, rallying to get ahead early in the third quarter before the Deng-led Rebels went on a hot streak, scoring 13 straight points. Although they'd trail once more after another Mariner push, another string of buckets, adding up to 10, put Burnaby South in the lead for good.

It came on the heels of a similar victory on the Friday, where Burnaby South overcame a number of obstacles to edge Mount Baker 58-56 in a thriller. It was another chilly start, as the Rebels stared at a 25-6 hole after one frame. Burnaby South responded by going on a 23-5 run of their own and trail by only a point, thanks to Reya Sandhu's second trey of the quarter. The rollercoaster would continue into the third quarter with the Wild jumping ahead 42-33 before the Rebels put it into another gear, tying it 42-42 to start the final quarter

Once again, the Cranbrook-based Wild pushed brushed ahead, this time what looked to be a formidable 52-44 edge, before Burnaby's girls countered with a 14-4 game-winning run.

Singh topped the Rebels with 14 points, while Sandhu and Deng finished with 12 points apiece.

Shaking off the tourney opening 85-42 loss to Lord Tweedsmuir, Burnaby South blasted John Oliver 64-27, getting their best jump of the day with a 20-8 first quarter lead. Deng tallied 14 points and Laini Glover nailed 12, while Sandhu chipped in with 10.