It was Osho, Osho and more Osho last Saturday. The Seaquam Seahawks were unable to contain St. Thomas More’s Nick Osho, as the Grade 11 ball carrier counted five touchdowns to lead a solid 31-22 victory in North Delta.
Oct 24, 2019 10:12 AM By: Dan Olson 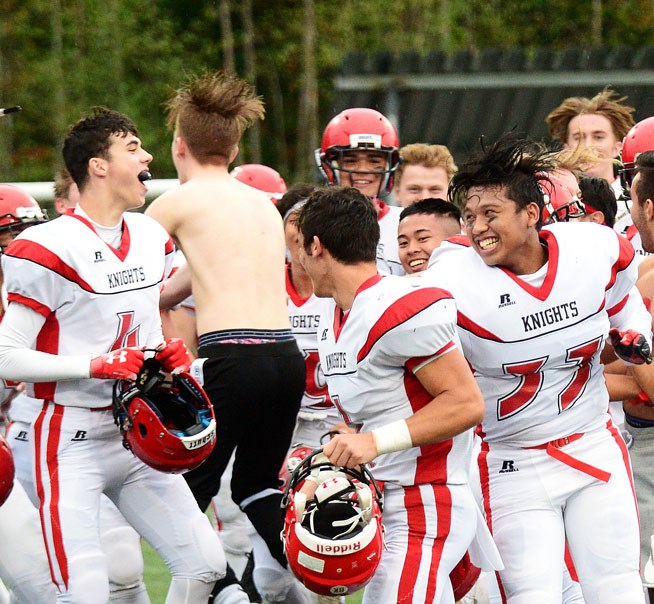 It was Osho, Osho and more Osho last Saturday.

The wet weather added a layer of difficulty for ball handlers on both teams. But Osho was able to hold on en route to a big game.

“We got off to a great start, even though it didn’t work exactly how we planned it,” remarked STM coach Steve De Lazzari. “We were successful with an onside kick on the opening kickoff, but we were intercepted in the end zone.”

On Seaquam’s first offensive play moments later, Osho stripped the ball free to give the Knights great field position. He’d carry it in from 14 yards out for the game’s first major.

The Burnaby squad’s second major came after another turnover off their second kick, setting up Osho’s two-yard score.

After the Seahawks scored in the second quarter, Osho countered with a 12-yard dash to end the half.

Then on the first play of the second half, he broke free for an 80-yard major to make it 25-7. That comfort zone was shortlived, however, as the Seahawks attacked and got within a field goal of tying the game.

But Osho wasn’t finished. He stripped Seaquam’s quarterback, and teammate Sean Oreta corralled the loose ball. A few plays later, Osho iced it with a four-yard run for a TD.

“Having coached his older brother, David, I knew (Nick) had this kind of potential. He was following in some talented footsteps, and he’s really developed his ground game this season,” noted De Lazzari.

Osho finished with 260 yards on 29 carries, in addition to two forced fumbles from his outside linebacker position. Quarterback Anthony De Lazzari, meanwhile, completed five of eight pass attempts for 65 yards.

They now venture to Coquitlam to play the winless Centennial Centaurs on Friday (7:30 p.m. at Percy Perry Stadium).