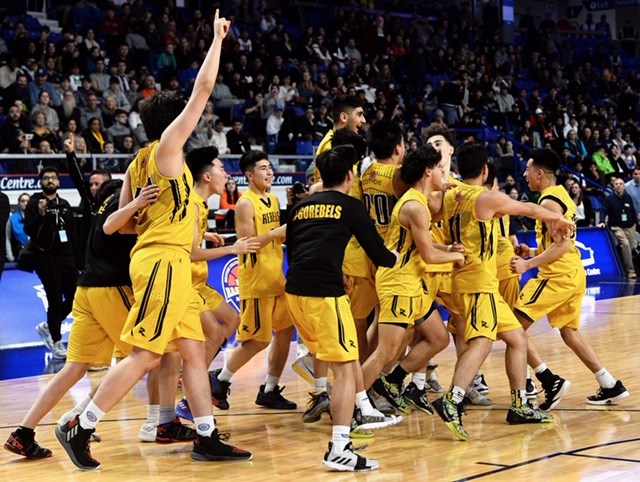 The Burnaby South Rebels celebrate the final buzzer after beating the Kelowna Owls 70-58 in the B.C. 4-A senior boys basketball championship final Saturday at the Langley Events Centre.Jennifer Gauthier

The Rebels of Rumble Street have done it again.

Brashly claiming the paint as their own, the Burnaby South Rebels capped the 2019-20 high school basketball season Saturday by clipping the Kelowna Owls 70-58 in the 4-A provincial championship final before a near capacity and boisterous crowd at the Langley Events Centre.

With so many weapons at their disposal, Burnaby South demonstrated why they wore the proverbial bull's eye on their back most of the year as the team to beat. In the end, no one could.

Dominating the inside game with a considerable size advantage, the Rebels essentially dared Kelowna to shoot from long distance all night. For but a brief flurry in the second quarter, where the No. 3-seeded Owls rattled in seven straight points to erase a 17-12 deficit and grasp a two-point lead, the Burnaby squad were in the driver's seat. Forty seconds after Jayden Lalonde's jump shot gave Kelowna the lead, the Rebels' Emir Krupic banked in a rebound to tie the score, and was followed by Grade 11 standout guard Justin Sunga's jump shot to restore the lead.

The Rebels would proceed to outscore the Owls 14-5 during that stretch, giving the gold-and-black squad a seven-point lead entering the half.

When six-foot-10 post Sasha Vujisic stormed out for the third quarter with a statement-making jam, the game became a brief back-and-forth battle. Kelowna, which only shot 18 per cent from the three-point arc in the first half, found the range to start the third frame, hitting its first two attempts. But Vujisic, who was held off the scoreboard until the last minute of the first half, added the team's next two buckets to make it 37-30.

The Owls cut it down to three points, thanks to a Ryland Ibbetson trey with under four minutes left in the quarter, but Sunga, and then Krupic -- with a loping shot that squeezed in under the shot clock buzzer -- put up back to back three-pointers to begin a Burnaby South streak.

They'd enter the fourth quarter with a 12-point margin, and while a couple of buckets would whittle it down to eight, the Rebels matched everything Kelowna threw at them to collect the school's fourth B.C. title -- and second one in three years.

"Any team we played we couldn't play down to their level, we just had to play our game. Same thing, every time, Kelowna's a good team. We just had to take away that sideline. We know they can shoot, they'll shoot in transition so we had to take that away and soak up the rebounds," said Sunga, who was selected the tourney MVP.

The Rebels won the board battle by a hefty 51-27 margin, owing a lot to a major size advantage as well as Kelowna's reliance on the three-point attempt -- of which they went 12-for-47 and 25.5 per cent.

"We just told them to pound the ball down low. (Kelowna) are so undersized, a great team though, well-coached and can shoot the hell out of the ball," remarked head coach Mike Bell. "That ball just flies out of their hands. Today we played better.

Krupic finished with a team-high 17 points and added nine rebounds, and was suitably proud to be part of the journey after last winter being ruled ineligible to play for the Rebels just as the playoffs began by Basketball B.C. He had to serve nearly a full-year suspension after the provincial body decided he was ineligible because of games played with a Seattle prep school.

It meant he had to sit for the remainder of 2019 before he could get into a game for his hometown Rebels.

"This past year I went through a lot, not being able to play," said the six-foot-three Grade 12 guard. "Honestly, all the hard work and this patience has paid off. I'm just happy to do it with this team -- everyone on this team is my brother and I wouldn't want to do it with anybody else. It's a blessing, it's redemption. I can't be anymore happier."

To cap it off, Krupic noted that he completed a rare hat trick with his teammates, having won provincial titles in both Grade 8 and 9, alongside some of his basketball brothers, before heading south to attend school for Grade 10 and part of Grade 11.

On the heels of Friday's 69-52 victory over Van College, it was a testament to the attention to defence that proved to be the foundation in a sound victory.

"We did a pretty good job. I was disappointed in how many extra opportunities we gave (Kelowna), but in the end of the day we're off the clock with a 12-point win. No team went over 60 points (against us). ... That's kind of incredible for our defence, let alone our offence."

Vujisic was named to the first all-star team, while Grade 11 guard Jareb Pineda was selected to the second all-star squad.