It was a long time coming. As someone who has been teaching at the school well before it became a secondary, Colleen Gaskell said the result that her Moscrop Panthers senior boys soccer achieved Wednesday was something special.
Oct 24, 2019 4:06 PM By: Dan Olson 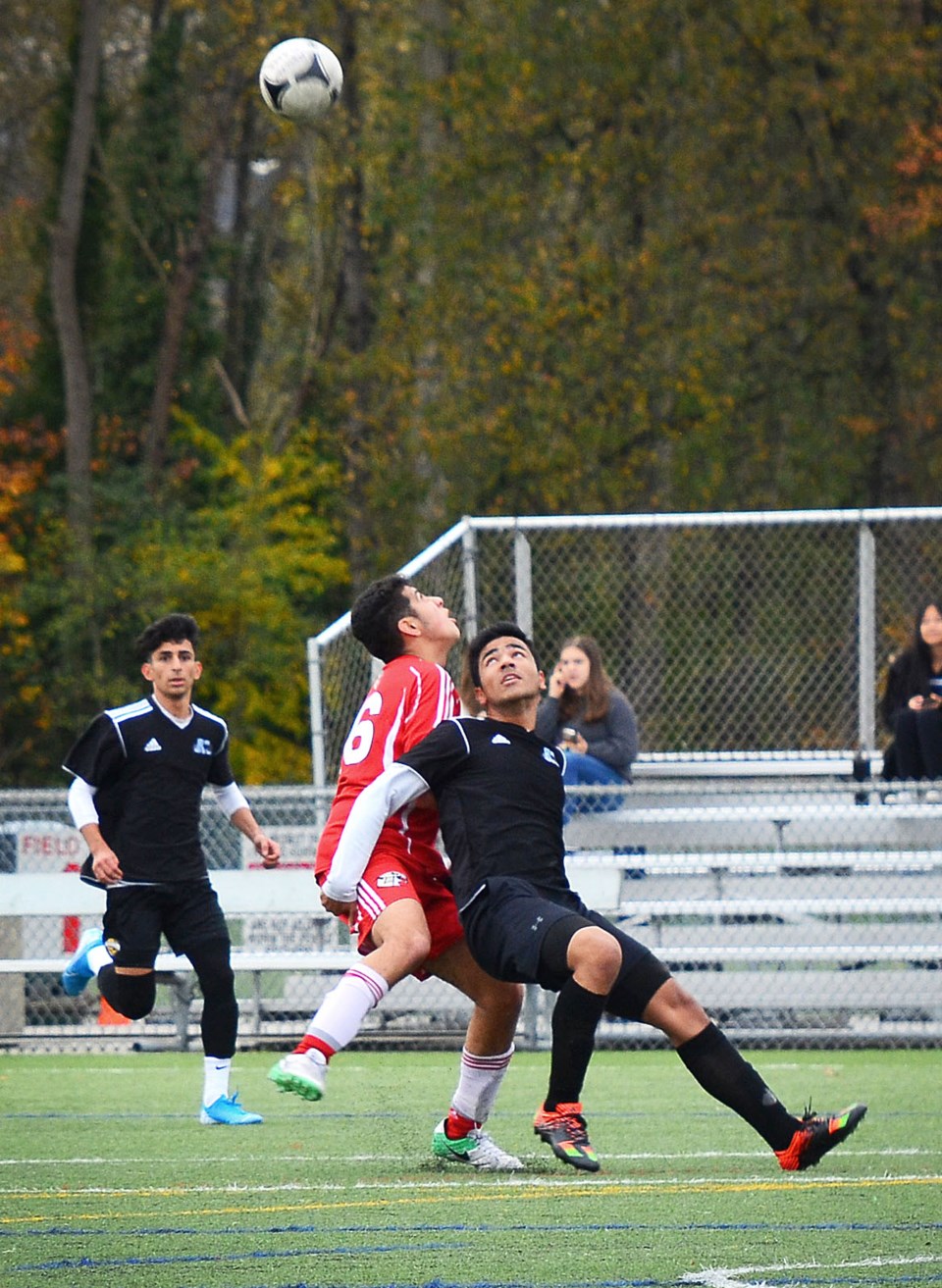 Moscrop's Pouria Maghali, at right, awaits for the ball to fall while under pressure by a Burnaby Central rival during Wednesday's league final at Burnaby Lake West complex. Maghali scored both goals in his team's 2-1 victory, earning the school its first senior boys soccer banner.Cornelia Naylor

It was a long time coming.

As someone who has been teaching at the school well before it became a secondary, Colleen Gaskell said the result that her Moscrop Panthers senior boys soccer achieved Wednesday was something special.

Considering that the school didn't even have a senior boys soccer team a year ago, it's mighty impressive, to boot.

Moscrop captured the Burnaby-New West senior boys soccer league banner by edging the Burnaby Central Wildcats 2-1 on Wednesday, checking off one of the boxes in this year's to-do list.

A pair of goals from Pouria Maghali, sandwiched around a Wildcat tally, earned Moscrop the honour, although there were some tense moments throughout the well-played match.

"It was so exciting," recalled Moscrop coach Colleen Gaskell. "I think I mentioned before how tight this league has been, both in scores and ability, and this game was just more proof."

Maghali opened the scoring with a great shot to the top left corner early in the first half, but it didn't take long before Burnaby Central countered. Minutes into the second half, Maghali struck again. And while the Panthers held an edge in play, the Wildcats applied enough pressure to make it exciting.

"I feel we had an edge in play but there were a few times when (Burnaby Central) had the ball inside our 18 (yard line) and we struggled to get it out."

Maghali, a Grade 12 student who also plays with the Vancouver Metro league's Div. 1 Sierra club, has been a major force.

"He's been a game changer for us, for sure," noted Gaskell.

She also added that both the final and a thrilling penalty kick semifinal victory over Burnaby Mountain two days earlier, were products of great team work.

In the semifinal on Monday, the Panthers rallied to force extra time, and after neither team could muster a goal during two overtime sessions, it came down to penalty kicks.

"We had many opportunities but it was one of those games that scare me," Gaskell said. "It just seemed like both teams wanted us on the edge of our seat."

Ranked sixth in B.C. in the most recent poll, Moscrop finished the regular season undefeated at 6-0-1.

Last year, Gaskell coached the junior boys team and could see that the group had the potential to dream big if the players showed up. A number of the players just returned two weeks ago from the club national championships.

"I'm the longest serving (teacher) at the school, and I was here back before it became a high school," she recalled. "One of my coaches is someone I coached here in the first year as a high school. In all those years we have never won a district senior boys soccer banner, so the boys are pretty excited.

"Everything comes down to hard work, team work and positivity. We've really come together as a group."

The next stage will be a complete new challenge, as it is the first year in the transition to a Fraser River North zone -- replacing the former Burnaby-New West-North Shore format. Moscrop, Burnaby Central and New West -- which defeated Burnaby Mountain 2-1 in the third-place game -- will advance to the zone playdowns, slated to begin next week. Unfortunately, the schedule has yet to be confirmed, but the local teams will compete against squads from the Coquitlam and Ridge Meadows districts for one of three tickets to the provincial championships.