Getting back to the final isn’t what they talk about, but the Byrne Creek Bulldogs are driven for the challenge. The senior boys 3-A basketball team enters this week’s provincials knowing the degree of difficulty it takes to peak at the right time.
Mar 5, 2019 4:45 PM By: Dan Olson 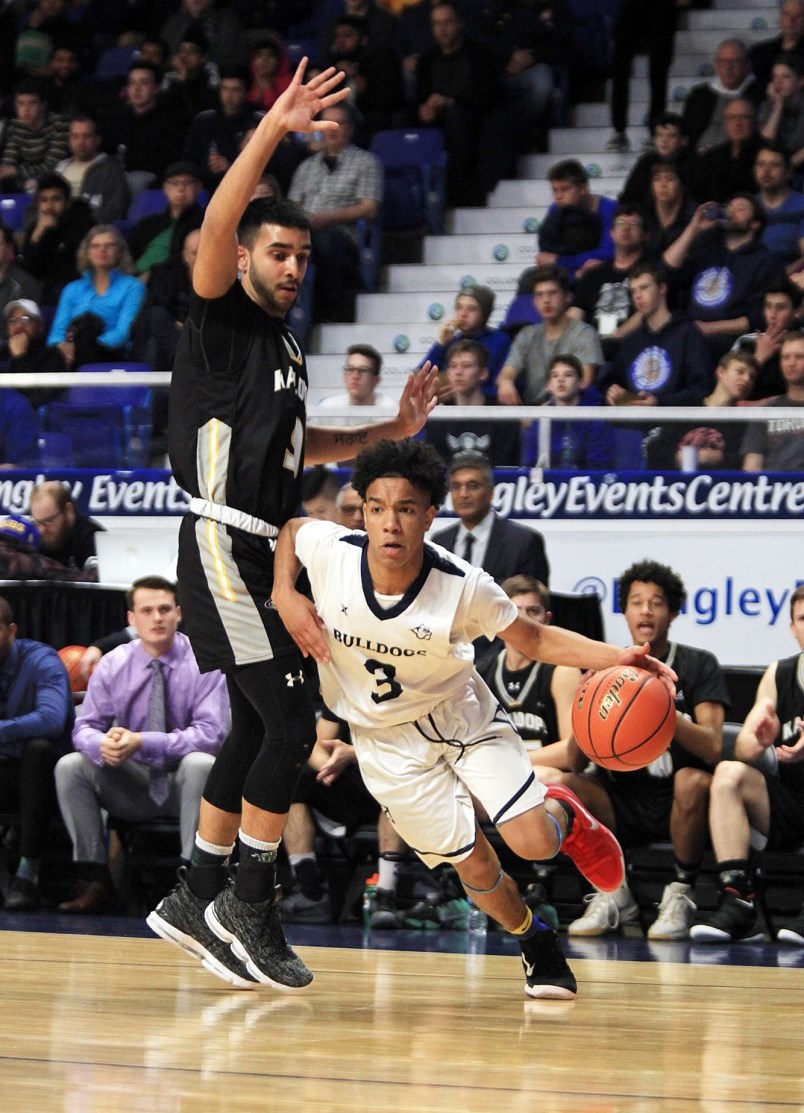 The Byrne Creek Bulldogs, including guard Sufi Ahmed, are looking to put their best foot forward at this year's B.C. 3-A provincial championships, which start Wednesday in Langley. The team is shooting for its third straight Final Four appearance.NOW file

Getting back to the final isn’t what they talk about, but the Byrne Creek Bulldogs are driven for the challenge.

The senior boys 3-A basketball team enters this week’s provincials knowing the degree of difficulty it takes to peak at the right time. A provincial finalist last year and back-to-back Final Four appearances, the team has a pedigree when it comes to the big tourney.

Fresh off of finishing fourth at last week’s Lower Mainland championships, the Bulldogs hope that two-game winning streak can be extended by four, starting Wednesday (March 6), 7:45 p.m. against No. 9 seed North Delta at the B.C. High School 3-A championships at the Langley Events Centre.

“We played them three times, and I think what we learned from those games was that we have to play hard for a full 40 minutes,” remarked Byrne Creek coach Bal Dhillon.

In the last provincial rankings, filed Feb. 27, the Huskies were ranked third overall, and the Bulldogs were slotted in at No. 5. But both teams have had their moment atop the list, and Dhillon says in a one-game playoff everything gets tossed out the window.

The winner of Wednesday’s game will advance to the quarterfinals (6:30 p.m. Thursday) to face No. 1 rated Sir Charles Tupper, who open against No. 16 seed Mark Isfeld.

The Burnaby school captured third place at last week’s Lower Mainland tourney, besting Steveston-London 81-76 last Friday in a match that was for B.C. seeding, as well as a touch of momentum. The day before Byrne secured its berth by knocking off Magee 82-64.

“It meant a lot, giving us the provincial berth, but this wasn’t the game we wanted to play in. We wanted to play in (the Lower Mainland final). We were working with what we have,” remarked senior Bithow Wan of the win over Magee.

Wan was named to the Lower Mainland tourney’s first all-star team, while teammate Sufi Ahmed was selected to the second squad.

As one of six returnees from last year’s provincial finalists, Wan sees a good mix of youth and experience that have an opportunity to achieve something special at the B.C.s. He likes the chemistry the group brings to the floor.

“It’s very good. We have young guys and we have older guys, next year we don’t have many older guys. It gives these (young) guys a chance to get a feel for provincials and maybe they can get a nice run,” he said.

The team has done a good job of putting the 2018 B.C. final, a 74-66 heartbreaking loss to South Kamloops, behind them. For those remaining, it does provide a blueprint of sorts that may help in this year’s tourney. After a lengthy season of league games and tourney runs, it all comes down to one week.

“We played six tournaments this year to practice for this type of scenario,” said Dhillon, in reference to the Lower Mainlands. “To play those games in a row, especially coming off a loss, is a test of your heart. That’s what sports teaches us. It teaches us about ourselves – who are we, after a win, after a loss, whatever the case may be.

“We have to let it go, we’ve got a new tournament we’re in and I think we can compete in it. That’s what we’re trying to do.”

For results, visit bchighschoolbasketballchampionships.com. For stories, check back here at www.burnabynow.com.