Burnaby South came on like gangbusters and advanced to the Lower Mainland 4A senior boys basketball semifinals with a sharp 96-64 win over Killarney on Wednesday. The reigning 4A B.C.
Feb 21, 2019 4:40 PM By: Dan Olson 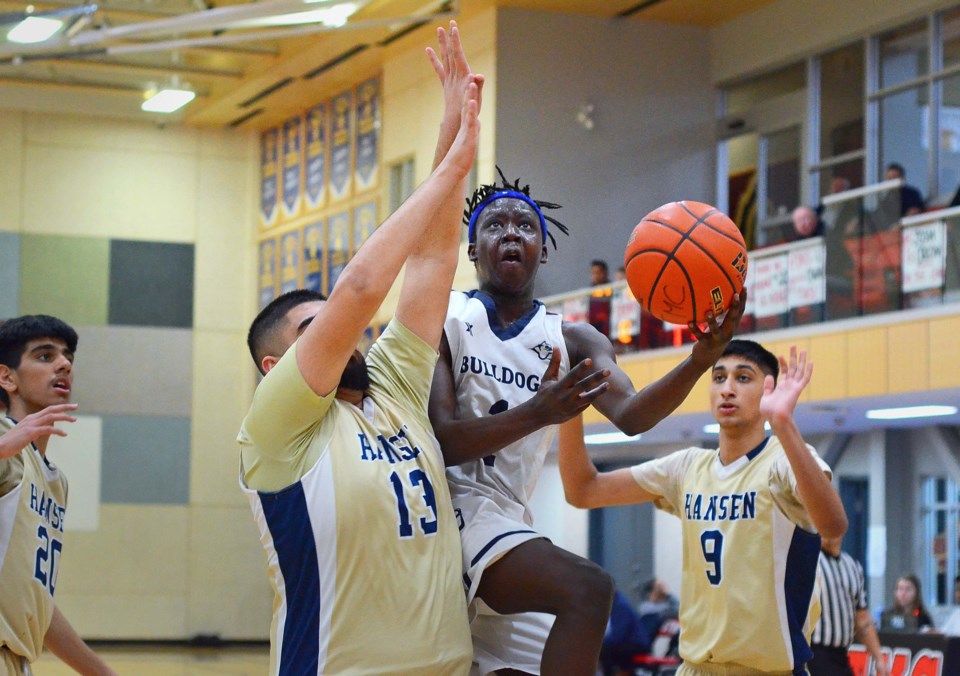 Byrne Creek's Bithow Wan, shown going for a layup during the St. Thomas More Chancellor tournament last month, will be playing in the Lower Mainland semifinals next week after disposing of STM on Wednesday.Cornelia Naylor

Burnaby South came on like gangbusters and advanced to the Lower Mainland 4A senior boys basketball semifinals with a sharp 96-64 win over Killarney on Wednesday.

The reigning 4A B.C. champs steamed out to a 57-33 halftime lead and showed a lot of the skill and determination which has earned them the No. 2 provincial ranking of late. Grade 11 post Sasha Vujisic tallied 31 points, 13 rebounds and two blocks, while fellow tall man Aidan Wilson contributed 16 points and eight boards. Matt Pineda, with 10 points, and Kyle Kirmaci and Jiordano Khan, with nine apiece, rounded out the top producers.

The Rebels now square off against No. 6-ranked Vancouver College on Wednesday, 6:15 p.m. at the Richmond Olympic Oval with a berth into the final on the line.

Ranked sixth in B.C., the Fighting Irish stand a perfect 3-0 in head-to-head action with New West.

David Thompson blasted Burnaby Central 87-44 – but in the double-knockout tourney, everyone lives to play another day.

In 3A action, the Byrne Creek Bulldogs launched their run for a potential return to the provincials with a polished 67-49 victory over St. Thomas More.

The Knights, who opened the tourney with a 72-58 win over John Oliver, must win their game Friday (8 p.m. at Lord Byng) against McMath to keep their provincial dream alive.

The Lower Mainland only has three berths for the B.C.s, March 6 to 9 in Langley.